After giving it a free run, the BBC finally nailed the Institute for Economic Affairs - Canary 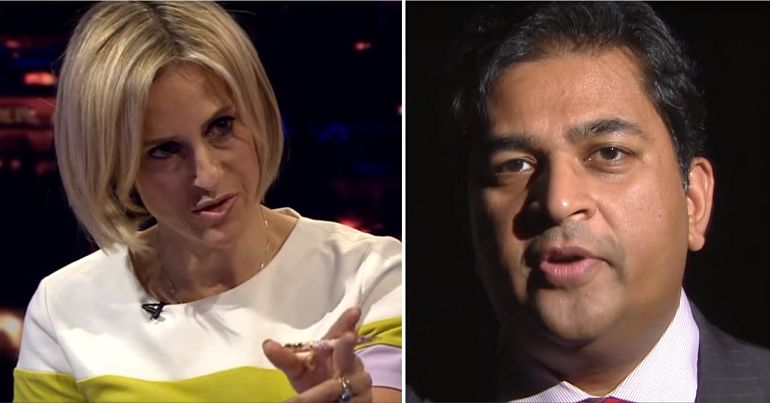 Viewers were surprised and delighted by Emily Maitlis’s brutal interview with a spokesperson from the Institute for Economic Affairs (IEA) on the 30 July edition of BBC Newsnight:

TONIGHT: The work of an undercover reporter has raised concerns regarding the political independence of the Institute for Economic Affairs think-tank. Emily will be joined by Shanker Singham from the IEA to discuss – 22:30.@maitlis | @ShankerASingham | @iealondon | #newsnight pic.twitter.com/PCaMWdp5XO

As the Guardian reported, a sting by an undercover reporter from Greenpeace revealed that the IEA:

has been offering potential US donors access to government ministers and civil servants as it raises cash for research to support the free-trade deals demanded by hardline Brexiters.

But ahead of the IEA’s appearance on Newsnight, people were sceptical about the BBC‘s ability to hold the organisation to account:

Considering the BBC has been platforming the disaster-capitalism of the IEA for years, I'd suggest it's more likely @maitlis will end up giving Shanker a foot massage than actually asking him investigative questions. #Newsnight https://t.co/k5DoApp31l

The BBC has previously been accused of giving IEA representatives a platform without making it clear whose interests they are representing. On one Newsnight episode, the IEA’s news editor Kate Andrews called for NHS privatisation. Yet the BBC‘s lack of acknowledgement of who funds the IEA led openDemocracy editor Adam Ramsay to accuse it of breaking its own conflict of interest rules:

Hi @BBCNewsnight, did you ask @KateAndrs whether her salary is funded by private healthcare companies?

Because if not, you’re breaking your own conflict of interest rules by promoting corporate lobbyists without telling the audience who their clients are. https://t.co/ic2lWZaXGl

But Maitlis’s aggressive interview was poles apart from this previously tepid journalism. She expertly highlighted the difference between the IEA having charitable status compared to if it were to be classed as a consultant lobbyist. And Twitter users also picked up on this point:

#Newsnight The thing that makes the IEA different is that it is registered as a charity and gets charitable status for tax purposes. Costing you & me money. To shift from education to advocacy should mean they are regulated as lobbyists and regulated as such.

She then attacked it on its lack of transparency over who funds its work:

"You get an E. You're right at the bottom." Newsnight to IEA, citing our transparency ratings (8:15) https://t.co/GiRZeVk6af

Maitlis then concluded with a powerful description of the IEA’s murky behaviour:

I’m asking you to help me here, to stand back and look at the perception of this revolving door which spins you from American lobby donors to top UK government ministers… you’ve got to admit it tastes really funny.

People were shocked and delighted by this change of approach from the BBC:

I was impressed with Emily Maitlis tonight, she got stuck into the pathetic tory MP Marcus Fysh and also asked some deeply probing questions of the chap from the IEA, so for a change #Newsnight did its job, this should be the norm for #bbcnews not the exception.

People singled out Maitlis in particular for praise:

The IEA should not have charity status. Well done Emily M of Newsnight for one of the best forensic interviews.

No apology for saying Chris Wylie’s comments were nothing more than allegations but watching @maitlis tear into the IEA’s Shanker Singham was well worth staying up for. Well done Newsnight. This is better.

Too little too late?

Yet for others, the BBC‘s newfound aggressive approach is too little, too late:

Hilarious….@maitlis going all full on righteous investigative journalist over how iea is funded….twitter has been asking you and @robburl to do that for years but you kept giving them a platform…you steaming hypocrites #newsnight

As The Canary previously reported, the IEA has a deeply worrying influence over some of the government’s biggest hitters. And some on social media blame the BBC for the organisation’s prominence:

You've literally got Shanker Singham on now to defend them

Let’s hope that, rather than coming around once in a blue moon, it represents a new dawn for BBC Newsnight.