The most vile anti-Corbyn front page yet just flopped, big time - The Canary 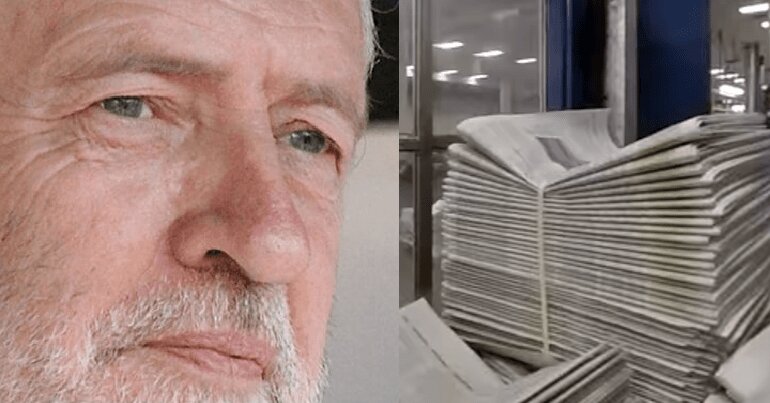 The Jewish Telegraph has published perhaps the most vile front-page attack on Jeremy Corbyn yet. Because the story has some serious holes when compared to the very report it’s referencing.

The Community and Security Trust (CST) reported on antisemitic incidents in the UK from January to June 2019. It recorded a total of 892 incidents of antisemitism including an alarming 85 cases involving assault against Jewish people, an increase of 37%.

But the Jewish Telegraph decided to blame the rise of antisemtism on the Labour Party. And its framing of antisemitic graffiti next to a headline blaming Labour for the rise in antisemitism potentially leads readers to the interpretation that Corbyn’s party is somehow responsible for the vile tag:

The Jewish Telegraph appears to be using a serious piece of antisemitic graffiti as a political bludgeon to hit Corbyn with. Because the CST made no reference to the Labour Party when documenting that incident.

The Canary contacted the Jewish Telegraph for comment, but received no response by the time of publication.

But the issues with political and media coverage of the CST’s latest report don’t stop there. Many in the media chose to focus on incidents in the report that were “related” to Labour and antisemitism.

For instance, Marie van der Zyl, president of the Board of Deputies of British Jews (BoD), said in the Guardian:

This makes shameful reading for the party’s leadership. They must finally take the steps required to rid their party of this appalling racism.

These CST figures are Jeremy Corbyn’s legacy. They are the legacy of the most dangerous racist in British politics — a man whose toxic views and behaviour pose a far greater threat to ethnic minorities than the National Front or the BNP ever managed. The figures should shame Mr Corbyn.

This rhetoric is a world apart from the report itself. In fact, CST told The Canary that “any suggestion” that the report refers to any Labour members or representatives is “entirely misleading and irresponsible”.

Over the six months, CST recorded 100 incidents “related” to the Labour and antisemitism media controversy. That’s out of 892 total incidents.

But in an email to The Canary, CST clarified that doesn’t mean the incidents were perpetrated by people even “linked” to the Labour Party:

So even though people were reporting antisemitic incidents to the CST over a six-month period, no Labour members were implicated in the report. And only “some” of the alleged perpetrators had expressed some form of “support for Labour”, CST clarified to The Canary.

“Undermines the crucial struggle against all racism”

There are two things: First, it is essential to put the unacceptable rise in antisemitism in context: Islamophobia and other racism is on the rise in the UK. In my opinion, this is is the consequence of the mainstreaming of racist attitudes by politicians including Trump, Farage and Johnson. Their rise to power and /or prominence is mainstreaming racism, which is disgusting. Second, to blame the most consistently anti-racist politician in the UK [Corbyn] for the rise in AS, especially in the light of the polling in 2015/ 2017 which suggests Labour Party members are amongst the least antisemitic, is not just absurd and disingenuous, but reflects how antisemitism has been weaponised against him because of his anti-establishment politics. It is his criticism of Israel that is regarded as unacceptable, which is ridiculous as criticism of Israel’s brutal and illegal occupation is not antisemitism. This targeting of a lifelong anti-racist actually undermines the crucial struggle against all racism, antisemitism included.

Feinstein’s mother was a Holocaust survivor who lost 39 family members in Nazi concentration camps. He pointed out that pollsters have contradicted the narrative that Labour is antisemitic. For example, YouGov showed the percentage of Labour supporters agreeing with antisemitic statements actually fell by 8% from 2015-17.

In this debate, opposition to political Zionism is regularly confused with antisemitism. Even though opposing the apartheid Israeli state and its colonial practices is the right thing to do. At the same time, anyone holding Jewish people collectively responsible for the Israeli government is wrong and racist. And they must always be challenged.

No wonder academics at the Media Reform Coalition found reporting on Labour and antisemitism to be a “disinformation paradigm”. The Jewish Telegraph and the likes have pushed their anti-Corbyn propaganda too far. They’re only damaging their own reputations.