After just three days campaigning, the Tories and the DUP already look unfit for office - Canary 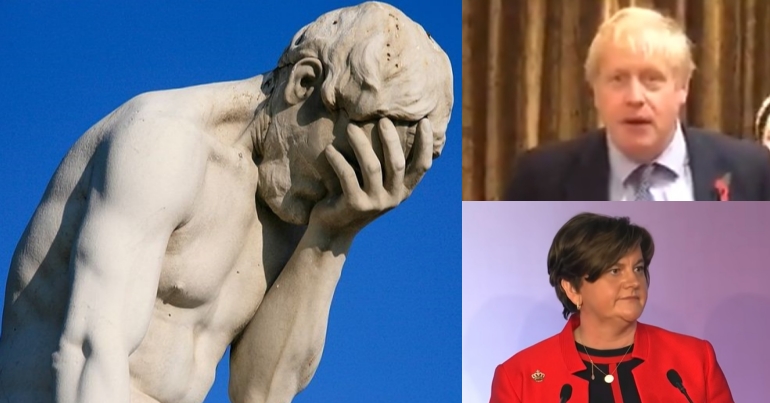 Since the election campaign got underway on 6 November, it’s been one disaster after another for the Conservatives and their partners the DUP. And if this much can happen in just a few days, the rest of the campaign should confirm why neither was ever fit to hold power. campaigning

As The Canary reported, Jacob Rees-Mogg made “despicable” comments about Grenfell. The Welsh secretary also stood down following accusations of lying, and Sky News interviewed an empty chair after James Cleverly allegedly failed to turn up for an interview. That’s just a snapshot of how despicable this lot are.

And it appears as if contagion set in across the unholy alliance. Because the DUP got off to an equally shameful start in the north of Ireland. A shameful start that includes allegations of loyalist terror threats, an embarrassing resignation, possible seat losses as Remain parties unite, and an incomprehensible Boris Johnson rant about how Brexit affects the north.

Desperate as it is, it’s not exactly alarming for pro-union Brexiteer parties to join forces, especially when it’s to oppose their rivals in Sinn Féin and pro-Remain parties. But it really should set off deafening alarm bells when the Ulster Defence Association (UDA) terror group gets involved to force this unionist alliance. Because it seems that UDA might have played a significant role to benefit the DUP.

After initially stating the Ulster Unionist Party (UUP) would stand candidates in all 18 constituencies in the north, newly elected party leader Steve Aiken soon retracted that.

And his retraction came soon after a report of threats and intimidation, by the UDA, against UUP staff. The UDA reportedly told the UUP not to challenge the DUP’s Nigel Dodds in North Belfast. Dodds’ main rival for this seat is Sinn Féin’s John Finucane. So if the UUP also ran a candidate, it would split the unionist vote.

Finucane is the lord mayor of Belfast and son of murdered human rights solicitor Pat Finucane. The UDA murdered Finucane in his north Belfast home in February 1989.

A little trouble for Pengelly

Remain parties such as Sinn Féin and the Greens announced they’ll step aside for the Social Democratic and Labour Party’s (SDLP) Claire Hanna in South Belfast. This will put serious pressure on sitting DUP MP Emma Little Pengelly and particularly so if the 2017 vote repeats itself. In 2017, Pengelly won her seat by less than 2,000 votes. The SDLP finished second.

On that occasion, Sinn Féin, the Greens, and the SDLP got a combined vote of 20,687. The combined unionist vote was 14,826. A local political commentator already said Pengelly’s “pretty much looking like she’s toast”.

MP forced to stand down

And it only got worse for the DUP. MP for Upper Bann David Simpson stood down after revelations of an affair with a party colleague. He’d been MP since 2005 and consistently voted against same-sex marriage.

Finding a replacement was a real concern for the DUP as his constituency doesn’t have enough paid members to choose one. So head office had to step in to select someone to stand.

If all this weren’t sufficiently shocking and embarrassing on 7 November, Johnson delivered his own take on how Brexit affects the north. But nobody listening quite understood what he was talking about.

Johnson told local businesses they wouldn’t have to complete customs forms when sending goods to Britain. But that’s a clear misunderstanding of the situation.

It’s hard to believe so many mistakes could occur in such a short space of time. And such public cock-ups make it all the more damaging for the Conservatives and the DUP.

If these first few days are anything to go by, their days of ruining the lives of ordinary people in the UK will soon be at an end.