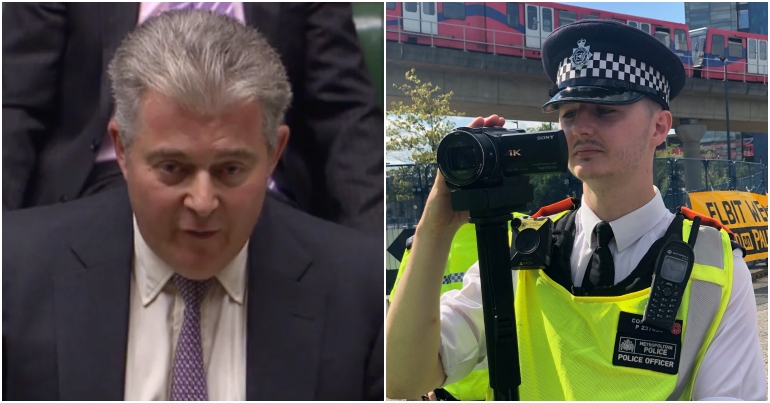 On 22 January, shadow home secretary Diane Abbott asked an Urgent Question in parliament about the government’s controversial Prevent programme. Abbott wanted to know why groups such as Extinction Rebellion (XR), Greenpeace, and vegan advocacy groups were included in a counter-terror document.

But in response, Home Office minister Brandon Lewis lied. Either that, or he’s totally ignorant about protest policing in the UK and how the police label campaigners as domestic extremists.

Lewis reiterated the fact that the original guidance had been withdrawn and repeated the police’s claim that XR’s inclusion had been an “error of judgment”.

He then told parliament:

we and the police have both said that protest groups are not extremist groups. And membership of a protest organisation is not nor should it ever be an indicator that an individual is vulnerable to being drawn into terrorism.

But responding to the claim to The Canary, coordinator of the Network for Police Monitoring (Netpol) Kevin Blowe called the response an “outright lie”, insisting:

The documents say the exact opposite. They asked public sector workers specifically to look out for and report unspecified concerns based on an alleged “threat”. There is no other way of describing this response, other than calling it an outright lie.

Blowe also had the following message for the government:

Rather than attempting to gaslight the broad spectrum of campaigners that were self-evidently smeared by counterterrorism police, the government needs to follow up its own decision to abandon the domestic extremist label by forcing the police to do so too. Nothing else is acceptable now.

Netpol is currently running a campaign to stop the police from labelling campaigners as domestic extremists – a term that has no legal definition. As its website notes:

There is no need to have a conviction or even face any suspicion of criminality to find yourself categorised in this way. The list of ‘domestic extremists’ includes Baroness Jenny Jones, comedian Mark Thomas, and veteran peace campaigner John Catt… none of whom have criminal records, as well as a number of journalists who appear to have been labelled ‘extremist’ simply for reporting on political protest and campaigns.

This isn’t fantasy or paranoia. Everyone on Netpol’s website, myself included, have seen files held on us by the police’s domestic extremist units.

This is nothing new

If Lewis isn’t telling an “outright lie”, his lack of knowledge is unforgivable. Because this isn’t anything new. The police have kept files on ‘domestic extremists’ for years, covering people in many of the protest groups listed in these documents. People have been harassed and spied on because the police consider them extremists.

And police forces and Prevent programmes across the country have long used the example of fracking protesters as a marker of extremism. In fact, Netpol won a three-year legal battle in 2018 against five police forces to get them to confirm or deny whether they had made any Prevent-related referrals based on involvement in anti-fracking protests. As a result, they confirmed they had.

The right to peaceful protest is a cornerstone of our just society, says @UKHomeOffice minister

So why was @ExtinctionR put on a terror threat list by police?

And why was peaceful protest against fracking considered an extremism risk? pic.twitter.com/QKOmpgt7IH

The police must stop categorising campaigning and protest activities as ‘extremism’.
There must be better protection against the routine surveillance of protesters and campaigners.
The policing of protest should be clearly separated from the policing of terrorism and extremism.

If Lewis wasn’t lying, then he should support these demands and act urgently to stop the police using these terms. If he was lying, it’s down to all of us to hold the government and the police to account and defend our right to protest.