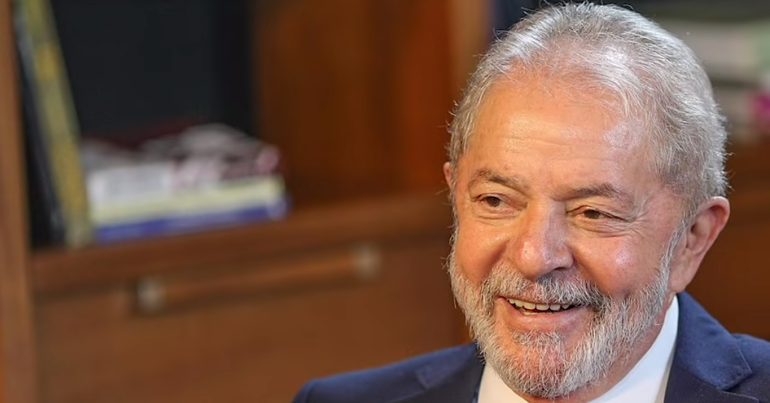 Lula, who was banned from running in the 2018 election due to a US-linked and politically motivated corruption probe, spoke with characteristic enthusiasm about US imperialism, Venezuela, and his presidency’s legacy.

As the first working class leader of Brazil, Lula spoke about the legacy of his presidency:

In just 8 years we did half of everything that was done in 500 years in Brazil. When we decided to start a program called Luz para Todos (Light for All) – because there were people living next door to electrical power plants who didn’t have electricity in their homes even though the power cables were passing over their houses – we brought electricity for the first time to 15 million people, for free. The State paid for it because if the State doesn’t bring electricity to the poor, the rich won’t do it…

During Lula’s presidency, Brazil played a key role in nuclear non-proliferation negotiations with Iran. In the past year, these peace efforts have fallen apart with the US withdrawing from the Iran nuclear deal and, more recently, assassinating a top Iranian general in Iraq.

Lula spoke about the US reaction to his peace negotiations with former Iranian president Mahmoud Ahmadinejad:

He accepted our agreement. I was surprised because I imagined that Obama would be happy with the deal but he increased the sanctions against Iran. Then we discovered that Hilary Clinton didn’t know about the letter that Obama had sent me. She got angry when [foreign minister] Celso Amorim and I told her about the letter. So I had no option but to publish Obama’s letter so people could see that we hadn’t done anything crazy.

At the G20 summit in London in 2009, Obama greeted Lula as the “most popular politician on earth”.

It was easy for me to speak with Ahmadinejad because I told him that the only thing I wanted from them is what we have in Brazil. I wanted him to have the same rights as Brazil. Brazil’s constitution supports the non-proliferation of nuclear weapons but allows the enrichment of uranium for peaceful purposes – for the production of medicine and things like that.

In a previous interview with the Intercept co-founder Glenn Greenwald (who is currently being persecuted by the Brazilian government), Lula began to express his concerns about the situation in Venezuela. Speaking with Brasil Wire and TMBS, he said:

The idea that you would officially recognize a con-artist [Juan Guaidó], a congressman who declared himself President of the Republic – imagine if this fad catches on around the World. What I think is mediocre is that countries around the World approved of it…

Lula turned to US interference in Brazil and Latin America. He said:

Today we know there were clear US Department of Justice interests in [Brazilian oil company] Petrobras, in my imprisonment and in the closing of Brazilian companies, especially in the construction industry…

And Lula finished with scathing words about the current neo-fascist president Jair Bolsonaro:

now Brazil has given away its freedom and its independence and it salutes an American president. Frankly speaking, I don’t think anyone respects people who don’t respect themselves.

The second and final part of the interview will be uploaded next week.