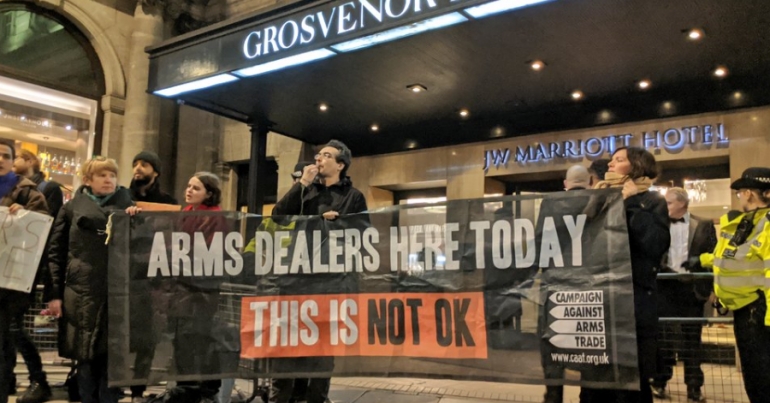 On 22 January, a prestigious arms-trade dinner took place at the Grosvenor House Hotel in London. The event, costing £235 per head for members and £470 for non-members, was meant to include a keynote speech from TV host Clare Balding. But Balding pulled out following correspondence from Campaign Against Arms Trade (CAAT) that urged her to reconsider her attendance.

The Aerospace, Defence & Security (ADS) Group is an arms-industry trade body that represents most of the world’s biggest arms firms. And according to CAAT, every year it holds a dinner to “bring politicians together with reps from [the] world’s biggest arms companies”.

But this year, delegates had difficulty getting into the venue, with arms dealers having to walk through a gauntlet of protesters who confronted them with the reality of their vile trade:

Seems like the only occasion that they hear that normal people regard them as criminals.#StopArmingSaudi #YemenCantWait pic.twitter.com/nlGtbIq9cG

“A key event on the arms trade calendar”

Although exactly who attended this dinner is unknown at present, details CAAT obtained about the dinner in 2015 showed that over 40 MPs attended the event alongside arms companies such as BAE Systems and Raytheon. These companies have profited from selling arms to the Saudi regime that are used in the destruction of Yemen.

This dinner is a major opportunity for arms company reps to lobby politicians and push for even more sales. It is a key event on the arms trade calendar, and exposes the scale of influence that these companies enjoy in the corridors of power. The deals being celebrated tonight could do damage for many years to come.

But not only did those attending the dinner have to face the reality of their trade, it was also hard for them to enter the hotel:

The front entrance of the annual arms trade dinner HAS BEEN SHUT DOWN.

Arms dealers not happy they have to walk in the side.

Or that most people here seem to regard them as war criminals.#StopArmingSaudi #StopArmingIsrael #YemenCantWait pic.twitter.com/MymvIOpEzY

The back entrance as well as the front of the annual arms dealers dinner has also been shut down.

Sam Walton, who was previously acquitted of attempting to damage a warplane destined for Saudi Arabia, was sent a moving statement from “someone living under the bombs”.

It was read out at the protest and begins:

No words can explain the magnitude of the tragedy that has befallen the people of Yemen… a tragedy that speaks of a brutal war launched on the Middle East’s poorest nation by the wealthiest and most powerful nations on earth – and for what? To secure more money through forceful invasions fuelled by power-hungry countries that support the arms trade for more and more and more money!

The statement then describes the arms trade that has “destroyed the lives of millions of Yemenis”:

[a trade] that has unleashed unprecedented suffering, deprivation, disease and starvation. One that has deprived millions the right to survive in this heartless world! The governments of these heartless nations protect this industry yet speak shamelessly of human rights and dignity!

When will the good people of the world stand up in solidarity with ALL those nations including Yemen that are being mercilessly and shamelessly ripped apart by the very weapons being produced and sold by governments across the world to brutal dictatorships?!

The statement asks readers to “picture yourself” in the situation that Yemeni people find themselves in:

picture yourself making plans for tomorrow after tucking your child up in bed… Picture yourself moving to the kitchen downstairs to ensure you turn off the lights before you retire to your warm bed in preparation for tomorrow when suddenly the roaring sound of jets overhead sends chills through your bones – but only briefly because the loud explosion that follows and the darkness from the debris is the last thing you’re aware of before you lose consciousness only to awaken a few days later – with amputated legs and terrible burns on your body.

But all the physical agony seems small compared to the agony of being told you lost your beautiful child – the child you tenderly tucked into bed not knowing that he/she would never open those beautiful eyes to call you by your name or to hug or to kiss you.

The blame for this is agony is firmly placed on the arms trade:

You lost everything – everything… because the weapons industry needs more and more deaths to feed its ever-hungry masters. Think of the magnitude of the destruction being unleashed on the people of Yemen.

And the statement finishes with a message we all need to hear:

“The arms trade on the run”

But thanks to pressure from campaigners, “the arms trade is on the run”. Walton told The Canary that:

We are successfully removing their social licence to operate – and even better – it’s easy. It’s easy to paint those complicit in war crimes as unethical, it’s easy to have court cases against you dropped when it’s as clear as day the weapons are killing children, it’s easy to shut down the annual arms trade dinner when there are hundreds of people willing to take action.

The tide is turning against the arms industry. And it’s essential that we all keep up this pressure. Because if we do, we can bang the final nail into the coffin of this deadly industry.