A Trump official just tried to outwit Greta Thunberg. It ended very badly for him. - The Canary 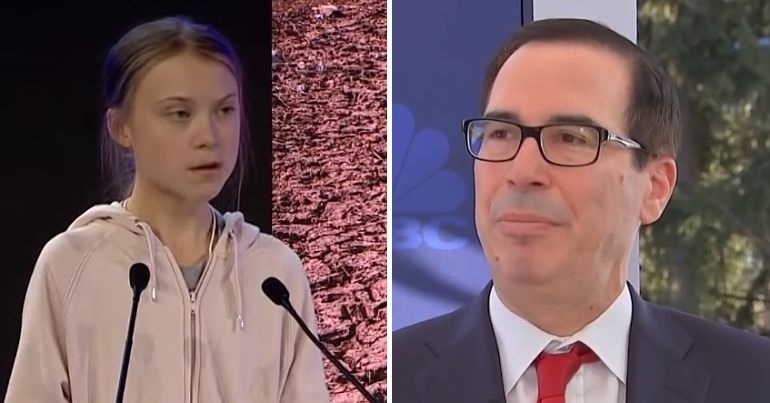 A Trump official tried to tear Greta Thunberg down a peg or two on 23 January. Responding to a question about the climate activist’s call for divestment from fossil fuels, Treasury secretary Steven Mnuchin said Thunberg should “come back and explain that to us” after she’s studied economics in college.

Mnuchin’s message was effectively ‘shut up and listen to the grown-ups, Greta, until you are one yourself’. He should have known better than to try and outwit Thunberg, though. He of all people, in fact.

Thunberg spoke at the World Economic Forum in Davos on 21 January. She told the meeting of global elites that:

Any plan or policy of yours that doesn’t include radical emission cuts at the source, starting today, is completely insufficient for meeting the 1.5-degree or well-below-2-degrees commitments of the Paris Agreement.

The Paris Agreement lays out a commitment by signatory countries to ensure the global increase in temperatures doesn’t exceed 2°C (with the aim of keeping it at 1.5°C or below). Climate scientists say that temperature increases above the average in 1850-1900 must be kept to 1.5°C at the most if we are to limit the most severe effects of climate change. The average temperature increase in 2019, i.e. global warming since 1850-1990, reached 1.1°C. In short, we’re not going far enough or fast enough in taking necessary measures (such as reducing emissions) to hit the target. So Thunberg called on Davos attendees to:

Immediately halt all investments in fossil fuel exploration and extraction.

And immediately and completely divest from fossil fuels.

It was this vital demand that Mnuchin responded to with his condescending remarks. He also commented:

Is she the chief economist, or who is she? I’m confused

Perhaps a picture will help

Donald Trump notoriously needs his briefings to come with lots of pictures because he’s “indifferent to subtleties”, reports claim. Perhaps Thunberg wondered whether that applied across the board with Trump’s team, because she responded to Mnuchin’s slur with a visual:

My gap year ends in August, but it doesn’t take a college degree in economics to realise that our remaining 1,5° carbon budget and ongoing fossil fuel subsidies and investments don’t add up. 1/3 pic.twitter.com/1virpuOyYG

The climate activist also explained where the graph came from and challenged Mnuchin to either:

Somebody should tell Mnuchin about the hundreds of Harvard faculty members – and thousands at other universities – who have called for fossil fuel divestment too. https://t.co/t3VhdYvQSE https://t.co/1aaGTUknRZ

Others just flat out gave Mnuchin a piece of their mind:

Look at #Mnuchin, this smug clown. #GretaThunberg has more integrity and wisdom in her pinky toe than a thousand Mnuchins.

Get back to school (not you, Greta)

CNBC reporters discussed the climate crisis with the Treasury secretary after his comments. Some of the journalists appeared to be completely in tune with the Trump administration’s climate-crisis denial. But one asked Mnuchin about a contradiction in Trump’s position, whereby he supports the value of tree-planting to the planet but “does not believe that carbon dioxide is ultimately the problem”.

Trees absorb carbon. That makes them a vital ingredient in battling the carbon emissions we’ve released, and continue to release, into the atmosphere. But if Trump doesn’t believe carbon is a key part of the problem, then why does he think we need the trees? That was essentially the journalist’s question. Mnuchin responded:

It’s both correct. He doesn’t believe that [carbon is] the problem. On the other hand, obviously, planting a trillion trees is a good thing for the planet.

Well, first of all trees are being cut down at paces all around. I mean, having forests, creating trees, I think these are all good things.

Clearly, someone needs to go back to school. But it’s not Thunberg.