Don't be shocked, but we're all still poorer than in 2008 - Canary Workers’ Co-op 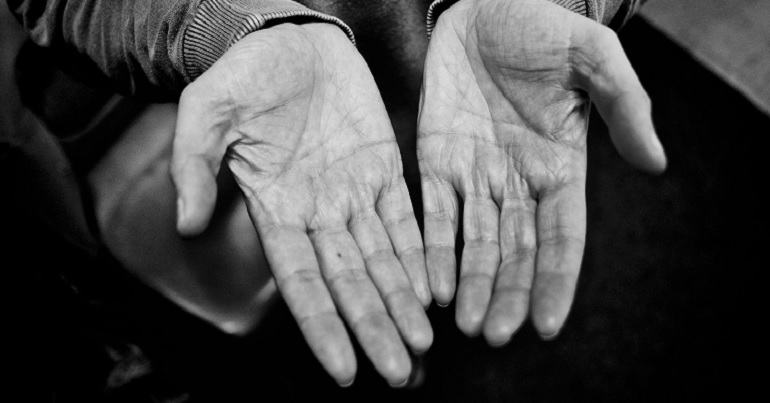 It probably won’t come as a surprise to many people, but a thinktank’s analysis has shown that we’re all still poorer than we were in 2008. You may wish to pick your jaw up off the floor.

No, you’re not imagining it. You’re skint.

The New Economics Foundation (NEF) has published research on gross domestic product (GDP) per head of the population. This is essentially how much money the UK makes in total, divided by the number of people living here. And it throws into question the government’s own analysis.

The NEF says that on average people were £97 poorer annually than in 2008. This is based on the three months leading up to Christmas 2019. As a branch of Unite the Union pointed out on Twitter:

As part of Unite’s work to confront the biggest squeeze on wages since Napoleon, we are providing innovative tools for reps – like our Pay Claim Generator that reveals an employer’s ability to pay and gives confidence to our reps to go out and fight for a bigger slice of the pie https://t.co/MVOupvCDgm

Drilling into the data

Drilling down into the detail, the NEF uses a different calculation to the official government body the Office for National Statistics (ONS). It puts the effect of rising prices of things we buy (“consumer price inflation”, or CPIH) into the equation. And it also adds in VAT, a tax that’s not often equated for but hits the poorest the hardest. The end result is that the NEF says we’re worse off than in 2008. The ONS says we’re not: 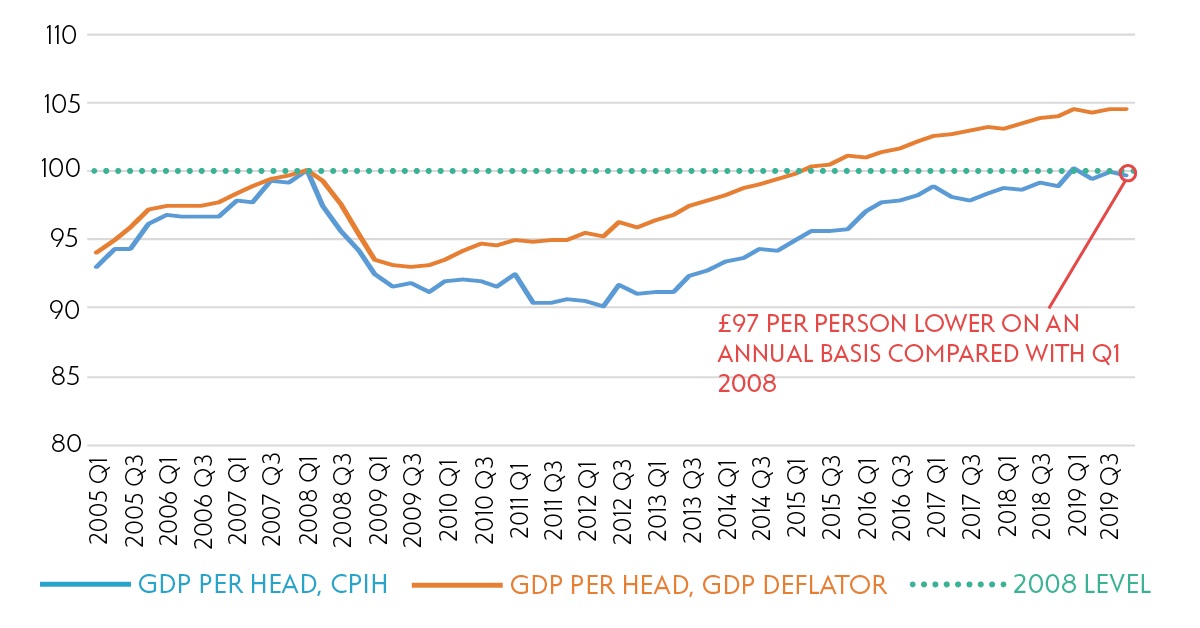 When you check the actual rising prices of things (CPIH) versus what the government claims (GDP deflator), it’s of little wonder many of us don’t feel any better off: 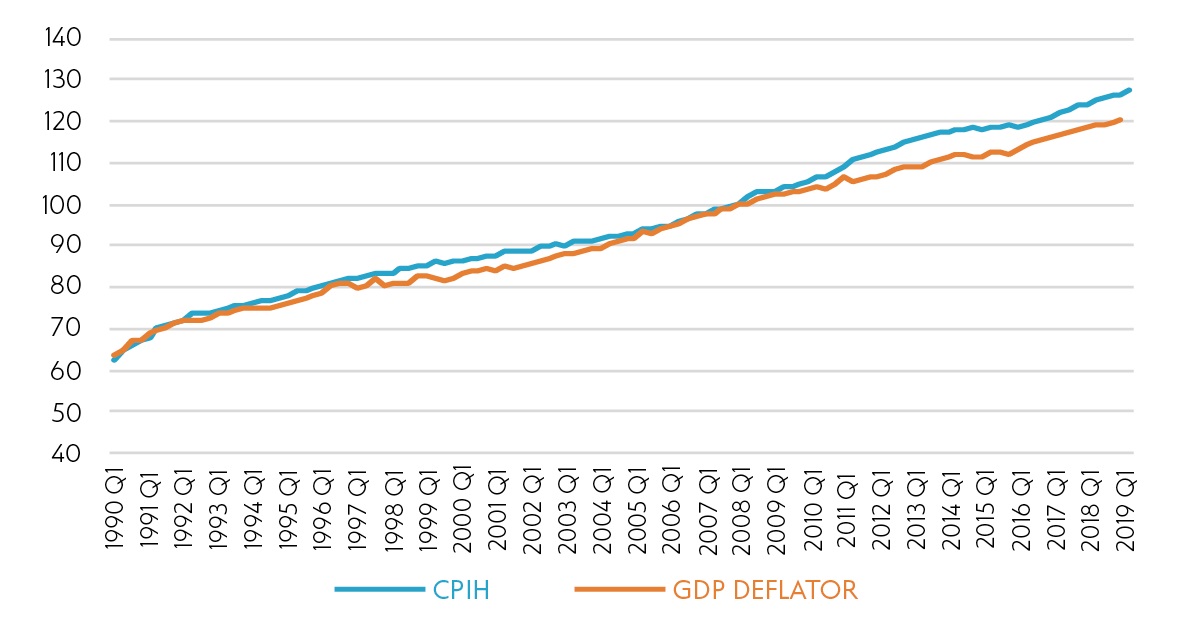 As the NEF’s head of economics Alfie Stirling wrote, the government claims people’s standard of living got back to 2008 levels in 2015. But the NEF says that’s not true. Moreover:

Outside of Westminster and Whitehall, it’s little wonder most people care more about not having shared in the last recovery, than they do about the chances of the next recession.

Indeed, with people still feeling the pinch, are they really worried about another recession? Technically, this is when the economy shrinks below 0% growth for two successive quarters. As City AM reported, the UK hasn’t had one since 2012. And that was just a brief recession. But lots of businesses are saying Brexit could cause one. For example, Barclays recently warned there might be another recession. This could see people losing their jobs and a fall in house prices.

But for many of the poorest people in the UK, the past 12-years may have felt like one long recession anyway.

It’s the poor what gets the blame

If you’re on Universal Credit, there hasn’t been much financial joy for you. You may have been part of the 52% increase in foodbank use where the DWP has rolled the benefit out. Or you might be one of the 5.1 million people who will probably lose money under it. God forbid if you claim Employment and Support Allowance in the Work-Related Activity Group (ESA WRAG). Because the Tories cut your money by nearly £30 a week in 2017. And if you’re living with illnesses or impairments, your Personal Independence Payments (PIP) have been cut in real terms, too. That is, of course, if the DWP gave it to you in the first place.

If you’re lucky enough not to claim benefits, you’re probably not much better off, either. Because your wages haven’t returned to 2008 levels yet: 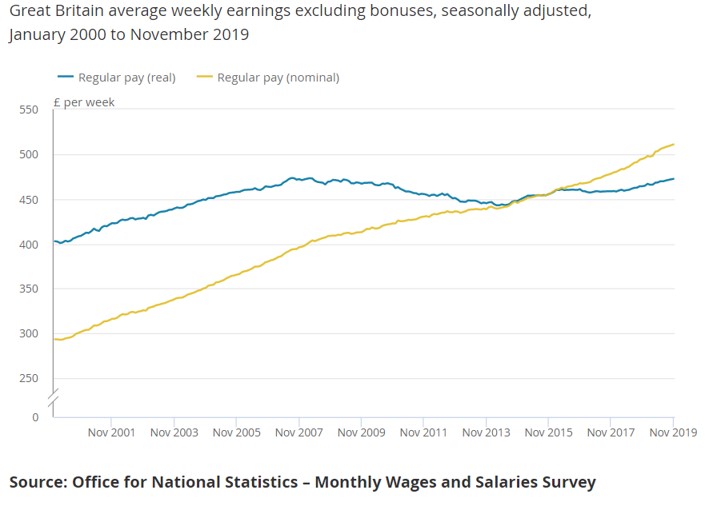 And if you work in hotels or restaurants, you’ve had the smallest pay increase of all sectors: 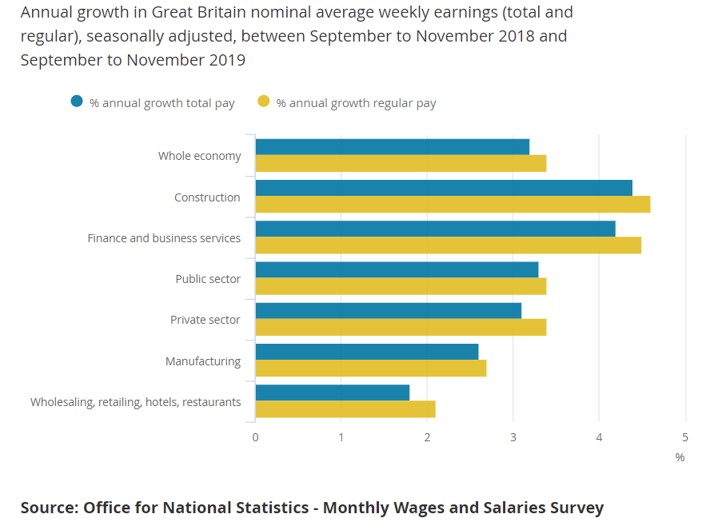 But many of you will know all this, anyway. Some of you may be part of the 14 million people living in poverty in the UK. You may be one of the 8 million of those who are working. Or your children could fall into the bracket of the 4 million living in poverty. Maybe your grandparents make up the 2 million pensioners also living on the breadline.

So, the NEF is merely telling many of us what we know already. Moreover, it’s probably telling many people reading this what they live day-to-day. But it’s yet another thinktank showing that the government’s claims about “levelling up” and things getting better are ultimately a load of hot air.