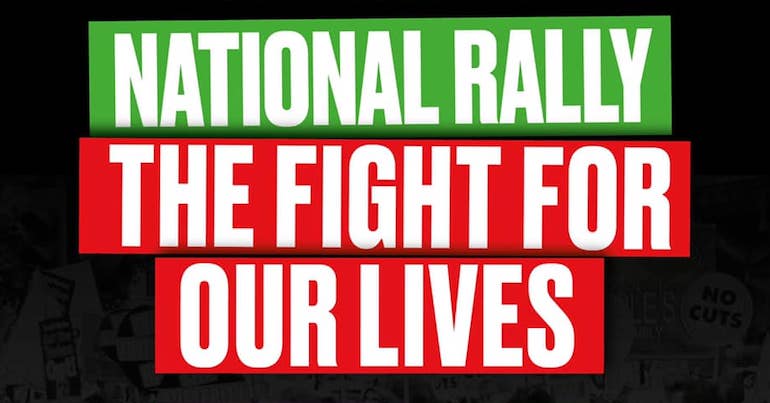 On 7 May, between 6.30pm and 8pm, campaign groups all over the UK are taking over the internet to Fight For Our Lives. The UK death toll from coronavirus (Covid-19) is now the highest in Europe. This event is the start of the fightback to challenge the government’s mishandling of the crisis.

Fight For Our Lives

Organised by the People’s Assembly Against Austerity, this event is a mass collaboration of groups representing millions of ordinary people. The event page states:

The Government’s mishandling of the coronavirus crisis has cost thousands of lives. The People’s Assembly will be hosting a huge online platform for campaigns to voice their demands to meet this emergency and for a better life after the crisis.

Diverse groups representing pensioners, unions, Black, Asian and Minority Ethnic (BAME) communities, refugees, alternative economic models (such as Universal Basic Income), and many more have united to challenge the government, stand in solidarity, and show that beyond lockdown a different world is possible.

People’s Assembly national organiser Ramona McCartney told The Canary that the idea for this event came from an effort to “try and somehow make sense of the crisis”. She explained:

When we went into lockdown, lots of activists asked ‘how can we be activists?’ and ‘what do we do in this situation, when everyone’s locked in their houses?’ There was a great feeling that the government was completely mishandling the whole crisis, especially around the NHS, careworkers and keyworkers.

The number of groups involved is testimony to the energy behind this campaign. 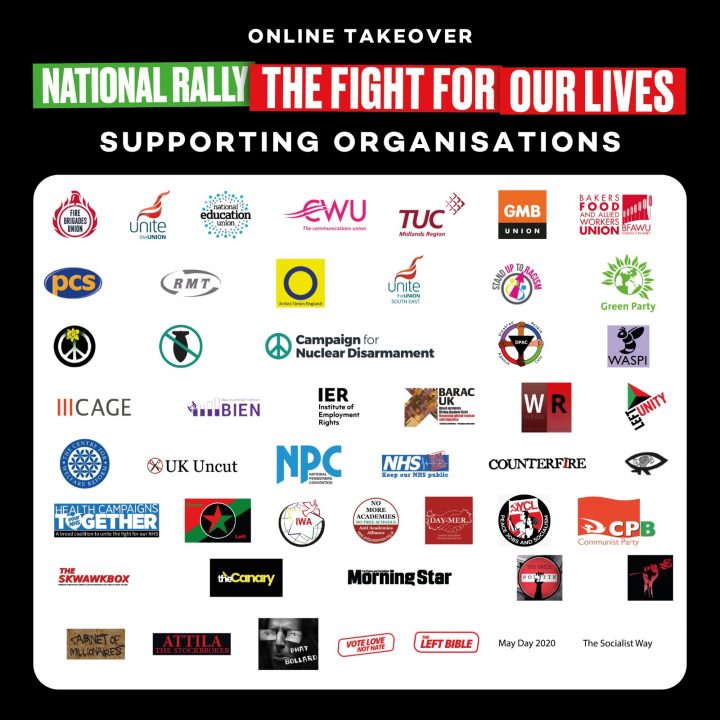 Against a rising awareness of the lack of protection for millions of workers, McCartney and others recognised a growing sense “of unrest”. Alongside this came the increasingly dangerous government response. Not least because, as she also emphasised, government “press briefings just sounded like a propaganda machine every day”.

Momentum for the event grew from a series of online People’s Assembly debates and talks. These drew “thousands of people” watching live and “over 200,000 views” afterwards. From this, McCartney explained:

We wanted to pull everyone together. To show that there is resistance to what’s happening and to unite. There’s a unity across these left-wing organisations. That’s how the idea came for this huge online rally.

To extend this, the 7 May event will ‘takeover’ social media accounts of groups involved. This is to livestream the rally and reach as many people as possible. Each of the groups has also issued three demands. These focus on change and how “things must be different when we come out of lockdown”.

“There’s no going back”

The plan is for these demands to become “something for people to rally around’. Each of the organisations involved “speaks for their own and speaks for the people they represent”. These demands “may be in education, health, welfare or the arts. For us, it’s definitely no return to austerity”.

“The overarching theme”, McCartney said, “is that there’s no going back”. These demands come “from the people as a direct challenge to the government”. From there, the hope is that:

The public sign it, and someday in the future, when it’s safe enough to do so, we can meet on the streets in our millions.

Perhaps the most devastating aspect of the pandemic has been the impact on the communities already hardest hit by ten years of Conservative-led austerity. Studies have shown that the pandemic has hit the poorest people the hardest. The disproportionate impact of coronavirus on Black, Asian and Minority Ethnic (BAME) communities is also a rising tragedy.

The People’s Assembly is “an umbrella organisation” that was founded, as McCartney explained, “under one bold statement: End Austerity Now”. This now has added significance:

After ten long years of crippling austerity, you can see from the figures and death rates, most are from the poorest areas. The poorest people and the most vulnerable people and the ones going out to work… are the ones hardest hit. This shines an absolute light on inequality and inequality that has definitely come from the harsh cuts that we saw the Tories roll out over the past ten years.

“The biggest hope” for this event during such challenging times “is hope itself”, McCartney said:

People will see that we are united and there’s strength in our numbers. When you don’t have anything else, sometimes the biggest thing we have is each other. And when we all come together, it gives confidence to communities, individuals and to organisations that we have everything and everything is worth fighting for.

A different way is absolutely possible. If the Tories have shown us anything, they’ve shown us that the government absolutely has money when it wants to.

Above everything else, this event is about “coming together, showing solidarity and unity”. The plan is to also get #HealthBeforeWealth trending across social media. McCartney said:

Let’s make sure that the government knows that there is opposition out there no matter if we’re in lockdown or not. We’re getting ready.

This is a fight to honour the lives already lost in this crisis and our lives too. It’s time to let the Tories know that we’re here and our collective power is rising.

Featured image via People’s Assembly Against Austerity, used with permission