From the frying pan into the fire. The torture that awaits Julian Assange in the US. - Canary 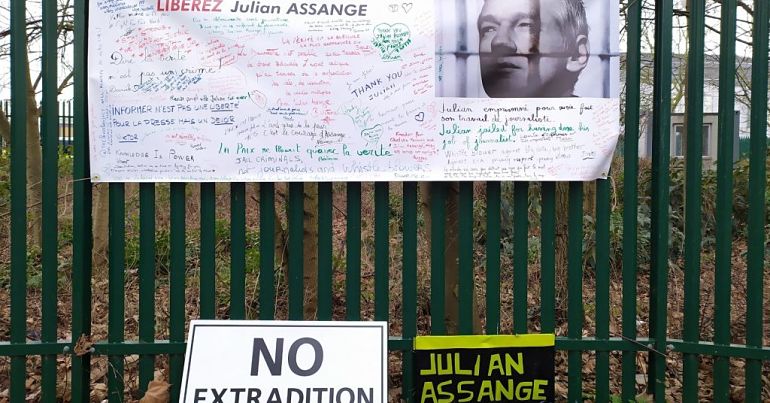 WikiLeaks founder Julian Assange is currently held in Belmarsh prison awaiting hearings that could see him extradited to the US to face prosecution for alleged espionage-related offences.

Award-winning US journalist Chris Hedges described the torture that would await Assange in the US prison system, adding “they will attempt to psychologically destroy him”. If extradited, Assange would likely be detained in accordance with ‘Special Administrative Measures’ (SAMs). One report equates this to a regime of sensory deprivation and social isolation that may amount to torture.

US journalist Chris Hedges spoke about the treatment Assange is likely to receive in the US. He argues that the US authorities will “psychologically destroy him” and that conditions imposed could see him turned into a ‘zombie’ to face life without parole:

#PulitzerPrize winner Chris Hedges [@ChrisLynnHedges] speaking about the type of treatment #Assange can expect if extradited to the US: "They will attempt to psychologically destroy him" #DontExtraditeAssange pic.twitter.com/EjPAPPMw1G

If Julian is extradited to the US, a darkness awaits him. He’ll be subjected to a prison regime called special administrative measures… He will be placed in a cage in the bowels of a supermax prison, a hellhole. He will be cut off from all contact with the rest of humanity.

From the frying pan…

Assange is already in a precarious position, alongside all other UK prisoners. Belmarsh is a high-security Category A facility and, as with all other prisons in the UK, inmates there are at risk to infection from coronavirus (Covid-19).

On 28 April, the BBC reported that there were “1,783 “possible/probable” cases of coronavirus – on top of 304 confirmed infections across jails in England and Wales”. Also that there were “75 different “custodial institutions”, with 35 inmates treated in hospital and 15 deaths”.

Vaughan Smith, who stood bail for Assange, reported that the virus was “ripping through” Belmarsh:

We know of two Covid-19 deaths in Belmarsh so far, though the Department of Justice have admitted to only one death. Julian told me that there have been more and that the virus is ripping through the prison.

Assange has a known chronic lung condition, which could lead to death should he become infected with coronavirus. Assange’s lawyers requested he is released on bail to avoid succumbing to the virus, but that request was rejected.

As for the psychological effects of segregation, a European Committee for the Prevention of Torture and Inhuman or Degrading Treatment or Punishment report argued that it can “can have an extremely damaging effect on the mental, somatic and social health of those concerned”.

…and into the fire

It’s likely that Assange will be placed under SAMs if he is extradited to the US. The Darkest Corner, a report authored by the Allard K. Lowenstein International Human Rights Clinic and The Center for Constitutional Rights, describes how SAMs work.

In its summary, the report explains that:

SAMs are the darkest corner of the U.S. federal prison system, combining the brutality and isolation of maximum security units with additional restrictions that deny individuals almost any connection to the human world. Those restrictions include gag orders on prisoners, their family members, and their attorneys, effectively shielding this extreme use of government power from public view.

SAMs deny prisoners the narrow avenues of indirect communication – through sink drains or air vents – available to prisoners in solitary confinement. They prohibit social contact with anyone except for a few immediate family members, and heavily regulate even those contacts. And they further prohibit prisoners from connecting to the social world via current media and news, limiting prisoners’ access to information to outdated, government-approved materials. Even a prisoner’s communications with his lawyer – which are supposed to be protected by attorney-client privilege – can be subject to monitoring by the FBI.

It ominously adds that: “Many prisoners remain under these conditions indefinitely, for years or in some cases even decades”. Moreover, these conditions can be used as a weapon to force a prisoner to plead guilty:

In numerous cases, the Attorney General recommends lifting SAMs after the defendant pleads guilty. This practice erodes defendants’ presumption of innocence and serves as a tool to coerce them into cooperating with the government and pleading guilty.

The report provides further details on how SAMs incorporate sensory deprivation and social isolation measures that “may amount to torture”. Also, it argues that the SAMs regime contravenes both US and international laws.

Should the UK courts agree to extradite Assange, he could face months, if not decades, of psychological torture. However, Article 3 of the European Court of Human Rights states clearly: “No one shall be subjected to torture or to inhuman or degrading treatment or punishment”. Under that article, the US extradition request should be rejected by the UK courts.

For a publisher to be subjected to such a nightmare scenario would be intolerable.