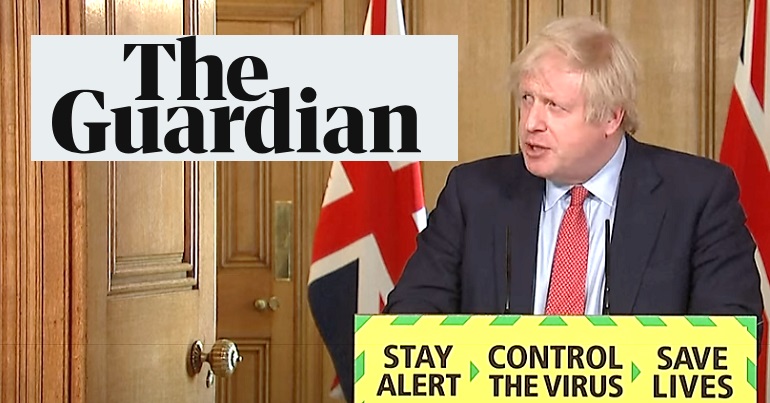 If you thought the BBC‘s track record on pushing out Tory government propaganda during the coronavirus (Covid-19) pandemic was bad, think again. Now it seems some corporate outlets, like the Guardian, have gone one step further. Because they’ve been publishing articles paid for by the government.

The investigative website Declassified UK noticed something odd about certain articles from the corporate media. As it tweeted:

The UK government is paying @guardian to tell its readers that its response to coronavirus is really very good.

Imagine being a news organisation and accepting money from the government.

The Guardian article in question was paid for by the government. It does clearly state at the bottom that:

This advertiser content was paid for by the UK government. All in, all together is a government-backed initiative tasked with informing the UK about the Covid-19 pandemic.

Also, when you click on the link under “paid for by” at the top left of the article, it takes you to GOV.UK’s main coronavirus page. But the Guardian wasn’t the only outlet publishing ‘paid for’ government content. The Evening Standard, of which former Tory chancellor George Osborne is editor, has done the same thing:

It's not only the Guardian publishing "paid content" from the government. Here is a "news" piece in the Evening Standard which it says is "in association with the UK government". https://t.co/tqeD2O8bSJ pic.twitter.com/xkgAp6qvMg

The Evening Standard‘s deal with the Tories was less clear. Because when you click through on the link attached to the phrase ‘in association with the United Kingdom government’, it says that page doesn’t exist. But it’s listed under “commercial“. Meaning this Evening Standard piece, marked as “news”, is also at least partially paid for:

The content from the Guardian wasn’t just a one-off either. Since May, when whatever deal it struck with the government clearly started, it’s published 11 of these paid-for articles. But what’s interesting about both it and the Evening Standard‘s paid-for content is that it’s the Guardian which seems less rigorous in what it does with these articles.

The Guardian vs the Evening Standard

used to describe advertisement features that are paid for and controlled by the advertiser rather than the publisher and are subject to regulation by the Advertising Standards Authority in the UK, the Federal Trade Commission in the US and the Advertising Standards Bureau in Australia. This content is produced by commercial departments and does not involve [Guardian News & Media] staff journalists.

has been paid for by an advertiser, but it is controlled by the Evening Standard’s editorial staff. In some instances, an advertiser may provide funding for content that we already plan to produce… Alternatively, the advertiser’s funding could help us to produce content that would not otherwise have been generated. Advertisers can suggest topics and their logo will normally appear at the top of the article. However, we produce the content and decide whether to publish it. It must comply with our editorial Code of Conduct.

So, it seems the Guardian is effectively happy to take money for propaganda, no questions asked. Whereas at least the Tory-fronted Evening Standard has written the articles itself. But this practice of earning a few quid by happily ignoring critical analysis is not new.

Not a new problem

For example, the Department for Work and Pensions (DWP) paid for a wrap-around front and back page ad in the Metro in 2019. They were later banned by the Advertising Standards Agency for being “misleading”. Meanwhile, the Evening Standard also has form on this. openDemocracy reported that in 2018 it signed a £3m deal with:

But it’s perhaps the Guardian which stands out as the worst offender of all these.

Press Gazette reported that in 2018, while the paper ran articles critical of Saudi Arabia’s monarchical dictatorship, it also printed adverts paid for by it the Gazette noted that:

Adverts for the Saudi royal appeared online, including next to a comment piece by Labour MP Emily Thornberry on Wednesday… which was headlined: “Britain’s red carpet for the Saudi ruler is shameless”. …

The adverts featured a picture of the prince and a woman wearing a hijab in a car, with the line: “He is empowering Saudi Arabian women”. It comes after he changed the country’s law banning women from driving.

In a bizarre twist of irony, the Guardian even ran an article later in 2018 reporting that Ofcom had banned the Saudi regime’s TV adverts. The paper defended itself, saying:

The acceptance of advertising and sponsorship in no way affects our editorial position.

We are free to, and often do, challenge the activities of companies and organisations that are also our advertisers and sponsors.

But it’s not so much about the Guardian‘s editorial independence, more its moral compass.

Not only have The Guardian accepted Saudi money in return for printing three huge propaganda adverts for the Saudi regime in today’s printed edition, they have disgustingly decided to print all 3 pro-Saudi ads just before a full-page ad calling on the government to suspend arms sales to the Gulf state over Saudi’s involvement in the horrific war in Yemen. The Guardian has chosen to play both sides, and it is utterly shameful.

More than shameful, the Guardian‘s double standards show it is happy to accept money from a human rights violating regime while also criticising it. Are these the actions of an outlet that truly believes in fighting for human rights? Or of one that will compromise its ethical standards to secure its own financial position? The evidence appears to indicate the latter. And with outlets like the Guardian now accepting cash for government coronavirus propaganda, the problem of ‘advertorials‘ just took on a whole, other context.