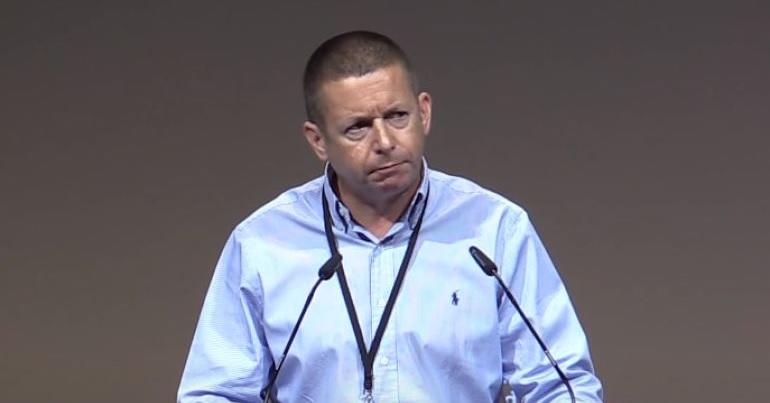 The United Left (UL), a left-wing coalition of Unite the Union’s members, will decide on its nominee for general secretary on 18 July. One of the people vying for that endorsement, Howard Beckett, has just revealed his bold vision for ensuring ‘workers win’.

“Fight. Fight. And Fight some more”

Beckett began his campaign to be the UL nominee for the union’s general secretary position on 15 July. He says it would be an “absolute honour to receive the nomination” and ultimately take up the position so he can “take our members through this crisis and help build an even stronger Unite for the future”.

He also posted a campaign video to Twitter in which he argued that:

Everyone in Unite has a role to play going forward. It is only by showing the breadth of our union that we can convince society that trade unionism, collectivism, solidarity is the way for workers to win.

Fight. Fight. And Fight some more.

Our members are angry & we want justice. Tonight, begins my campaign to be the UL nominee for General Secretary of Unite the Union. Come with me & win like we have won so many times before. pic.twitter.com/4ZPSDILcS9

Beckett, the union’s current assistant general secretary for political and legal affairs, also released a manifesto on 16 July. In it, he outlined some of the things he would do as general secretary of Unite. The vision includes reaching out to new sectors, so workers in those industries can benefit from the support of the union. Beckett identifies the care sector, where employees “endure the most exploitative conditions with no PPE, low wages and insecure employment”, as one example:

Borrowing from the excellent work of colleagues in Scotland, care sector workers all over the UK should be given the chance to be part of a dynamic Unite fight back strategy and I will launch a concerted organising programme for the care sector and other precarious sectors.

Beckett also vows that, under his leadership, the union would trust workers when in dispute with their employers and “be on your side”. As such, industrial campaigns will be “properly resourced” and different regions and nations will have “comprehensive campaign facilities, regional researchers and legal support”. Resourcing of the strike fund would also go up under his leadership, to £50m. He promises:

We will be a fighting union. We will fight tooth and nail for every job which is at threat in this crisis and beyond.

In his manifesto, Beckett outlines the support he intends to provide to workers who are struggling amid the coronavirus (Covid-19) crisis. Highlighting that millions of workers are living through “extremely difficult circumstances”, he’s considering proposals for up to two years’ free membership for people who are laid off and other membership offers for “for apprenticeship members, student members and those in precarious employment”.

Meanwhile, noting that Unite is the “first line of defence against poverty and hardship”, he states:

I will ensure our benevolent fund is better resourced and that it develops into regional welfare funds intended for workers in hardship.

He also commits to engaging members, organisers and officers in developing “the right structures and ways of working so we can build our strength and show real support and solidarity to each other”.

In a show of such solidarity, Beckett promises that, as general secretary, he would ensure the union pledged support for the Black Lives Matter movement. He details a series of measures on the subject of equalities, including overhauling Unite’s learning programme and auditing workplaces to understand the scale of under-representation and racism:

Black, Asian and other minorities, as well as women, LGBT+ and disabled members in our union experience multiple structural barriers and prejudice. It is important that we mitigate these barriers by putting in place opportunities for these groups, in recognition of that structural inequality, whilst also tackling the prejudices that intensify these inequalities

“Hold the leadership’s feet to the fire”

As the “largest affiliate” to the Labour Party, meanwhile, Beckett says he recognises how important it is that “the next General Secretary of this union is able to stand up to the party if it fails to represent our members’ interest”. In fact, he has already shown himself willing to stand up to the party’s current leader Keir Starmer. In a video posted on the 9 July, he warned:

Boris Johnson & Keir Starmer, I have a message for you both. We won’t stand idly by while you dump the pandemic fallout on the working class. We will fight back.

Similarly, in the manifesto he says:

I will be the custodian of the founding principles of the Labour Party and hold the leadership’s feet to the fire.

To aid in members’ understanding of politics at large, he has also pledged to set up “a new package of regional political schools and courses” for them.

“He feels the injustice very deeply”

Beckett is up against Steve Turner in the battle for UL’s endorsement on 18 July. Already, he’s attracted support from union and Labour Party heavyweights, such as Jennie Formby – who served as Labour’s general secretary under Jeremy Corbyn’s leadership. In her endorsement, Formby explained why she’s backing Beckett. Noting the various battles he’s taken up on behalf of workers, she said:

He understands how to win… but it’s more than that, he feels the injustice very deeply.

There are tough times ahead for workers in the UK, with the coronavirus crisis and a potential no-deal Brexit on the horizon. Many injustices no doubt await. A leader of Unite who takes those injustices to heart and fights tooth and nail for workers might well be a winning combination.