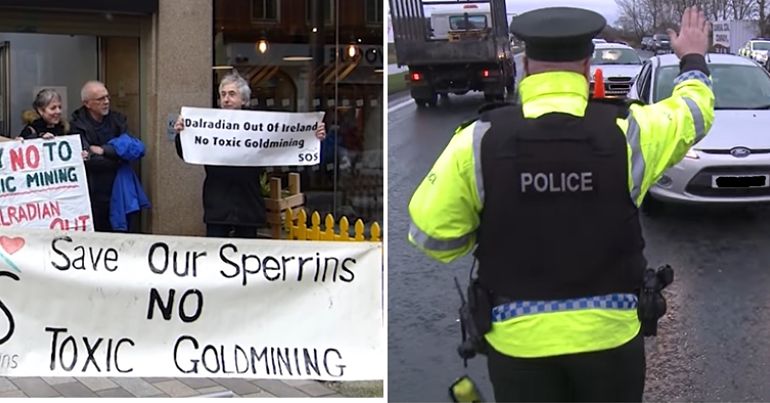 As the continued and growing opposition to the proposed goldmine in County Tyrone continues, community campaigners believe they’re battling police as well as the goldmine company. This follows a number of incidents in the community between anti-goldmine campaigners and supporters of the mine.

Campaigners claim the Police Service of Northern Ireland (PSNI) hasn’t taken the grievances they raised about these incidents seriously. This is in stark contrast, according to campaigners, to grievances made against them by goldmine supporters.

To highlight their cause, local campaigners formed a white-line picket outside Omagh police station on Saturday 22 August. Their protest received support from the trade union movement, political activists, and other anti-mining campaigners.

against the tactics employed by the PSNI when dealing with attacks on land protectors opposed to Dalradian’s destruction of #TheSperrinsAONB.

In recent days and months I have been made increasingly aware of the less than impartial job that the PSNI have been doing when it comes to Community Policing (or should that be Policing the Community) in Greencastle, Co. Tyrone.

Whilst supporters/employees of the proposed gold mine have carried out numerous verbal and serious physical assaults on local people, whilst death threats have been issued, people have been attacked by car and tractor, at mass and in local shops, online and in person, the PSNI have repeatedly refused to take any action.

At the same time, when frivolous accusations are made by those who support Dalradian’s destruction of the Sperrins AONB, ranging from allegedly cutting a cable tie to aggressively waving a finger, the same officers respond post haste and in numbers.

Given that the Canadian company must now owe the PSNI in excess of £1m, why do they continue to act as a private security firm, at a cost to each of us as tax/rates payers? With this in mind I’m supporting Saturday’s socially distanced demonstration, and encourage others to do likewise.

Community campaigner Martin Tracey (pictured below) told The Canary this protest is:

a real awakening for different people in different communities that have said they are coming to stand up now, because they don’t want policing to be what it used to be. 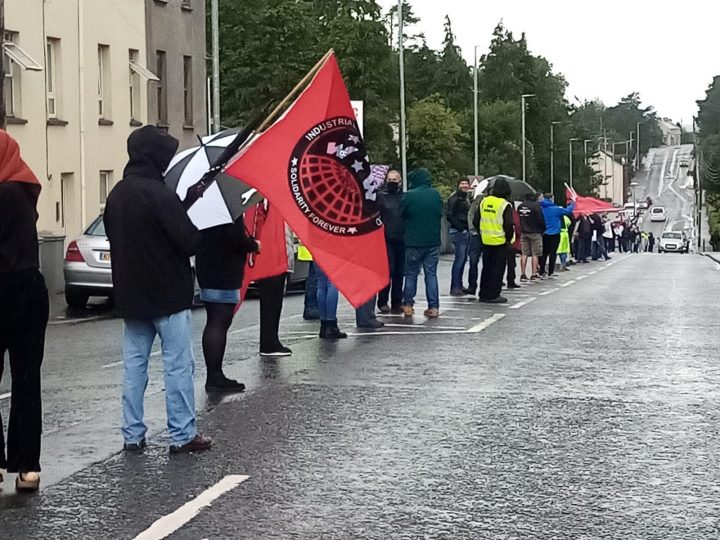 These local community activists told The Canary they feel the position taken by police is a tactic to further Dalradian Gold Ltd’s goldmine planning application. Tracey described it as “corporate policing” and added:

at the end of the day we’re not going back to the British establishment policing.

He also noted his community’s past relationship with policing:

In the past policing served the big British war machine whereas today it’s for industrial development coming in and raping this country of every asset that it has.

Tracey said the community also feels abandoned by four of the main political parties in the north of Ireland. These parties are Sinn Fein, the Social Democratic and Labour Party (SDLP), the Democratic Unionist Party (DUP), and the Ulster Unionist Party (UUP). Tracey told The Canary:

We feel that we’ve no other option. The political representatives, other than the independents in a number of different council areas, are not actually doing their job in representing the people that put them where they are and we feel it’s going back to the civil rights thing that people have to stand up for themselves or be trampled on top of by big business and corrupt politicians.

In government, when others wanted to exploit our natural resources for profiteering, the SDLP took a stand and introduced a moratorium on fracking. Similarly, we support a moratorium on strip mining and precious mineral/metal mining until we can be assured by scientific evidence that the extraction process poses no risk to our environment, public health or local communities.

Infrastructure Minister Nichola Mallon has a legal duty to consider all applications that come before her on the basis of evidence and representations from a range of stakeholders. Given the scale of responses to the application, over 40,000, Minister Mallon is right to call a Public Inquiry to independently consider the views of all those with an interest, particularly the local communities that will be affected.

McAleer elaborated on these grievances. He claims there’s a difference in police tactics when dealing with a “local land protector” or a goldmine supporter. McAleer says this includes the response times of the police and how they investigate the offence.

He claims campaigners “have reported countless examples of online, physical and verbal abuse… but as yet nothing has come of it”.

The Canary contacted the PSNI in relation to these accusations. A spokesperson for the PSNI said:

Police are aware the mining debate continues within the local community and we are liaising with all relevant parties.

We will continue to offer a service to the whole of the community in Omagh.

If anyone has a complaint to make about the actions of police they can contact the Office of the Police Ombudsman.

The Canary contacted Dalradian for response. A spokesperson for the company said:

We completely reject the allegation that any employee has been involved in any type of abuse.

There’s widespread opposition to this goldmine proposal. So on 29 June, the Department for Infrastructure (DfI) announced the application will be subject to an inquiry.

However, as Tracey told The Canary, they’re still unsure as to the precise details of this inquiry, and there’s also no start date. The Canary contacted DfI. A spokesperson said:

The commencement date of a Public Inquiry (PI)  will be a matter for the Planning Appeals Commission (PAC) to decide when the Department asks them to hold the PI. The Department will ask the PAC to hold the Inquiry when it is satisfied that the PAC has all necessary information to ensure that representations can be fully considered and robustly scrutinised.

The Department will shortly be requesting further environmental information (FEI) from Dalradian and this will require consultation with various statutory consultees and the wider public. Until this is fully assessed and considered it is not possible to confirm exactly when the Inquiry the Minister has committed to will be sought.

The PAC will organise the Inquiry in line with the Commission’s Procedures for Public Inquiries & Hearings into Regionally Significant & Called-in Planning Applications. This document can be found on the PAC website.

Environmental and community concerns need to take prime position. And whenever the inquiry takes place it must be truly independent. These campaigners won’t accept anything less.