Tories and cops plot new assault on protest rights in 2021 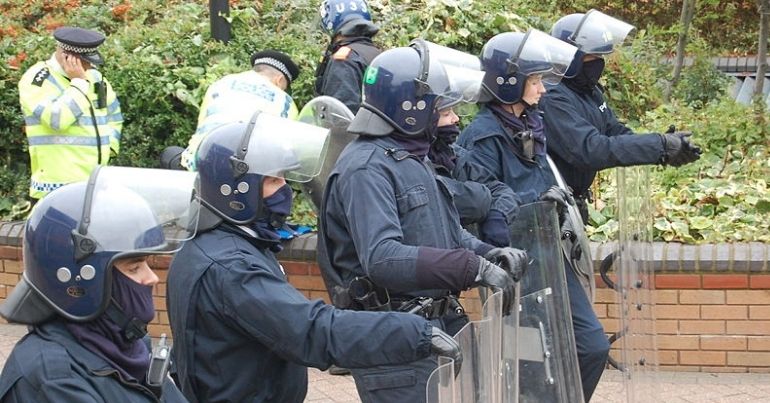 Draconian new limits on democratic protest are being planned as the government looks to further lock down dissent in 2021, the Network for Police Monitoring (Netpol) has warned.

This could mean new conditions for static protest, including powers to limit the number of participants and duration of a demonstration.

It seems the intention is to broaden these powers so they are more like those available for processions, which also allow the police to prohibit a demonstration from entering any specified public place.

The government also wants to change the wording of powers that put conditions on protests. It would broaden the definition from “serious disruption to the life of the community” to “significant disruption”.

This would provide senior police officers with greater flexibility to use these powers, although [lowering] the threshold for imposing restrictions does not automatically mean the police can “manage” a protest to their advantage. In April 2019, police issued numerous Section 14 notices against Extinction Rebellion protesters, who refused to comply with them. The proposed changes are simply more likely to give the police the chance to start earlier making a greater number of arrests.

Netpol also claimed that the government wants to:

introduce new grounds for using stop and search powers in order to “prevent significant disruption”, which could include searches for items that protesters could potentially use for direct action or civil disobedience, such as D-locks or climbing equipment.

The policing monitor said this amounted to a “significant expansion of stop and search powers” that will “encourage front-line police officers to search everyone even vaguely associated with a particular protest”.

This is unquestionably a reaction by the police specifically to Extinction Rebellion’s protests, in which most arrests were for minor alleged offences, either for breaches of restrictions under Section 14 or for obstruction of the highway.

The fact that senior officers and the Home Secretary have decided citizens taking to the streets to demand government action on catastrophic climate change is some kind of serious threat to democracy and public order is completely disproportionate. It’s a reminder of the ingrained antagonism that exists towards people exercising their rights to freedom of assembly.

Over the last two decades, every new police power has been misused or applied in a way that shows little concern for human rights. It is vital that when new changes are introduced next year, they are actively resisted.

The Protection of the Police and Public Bill is due to be published in 2021. It’s vital that we start organising now to ensure the police don’t get their wish list of protest powers. The right to protest without state interference is a fundamental one. And it’s essential that we don’t allow the Tories to get away with enacting this legislation without a fight.