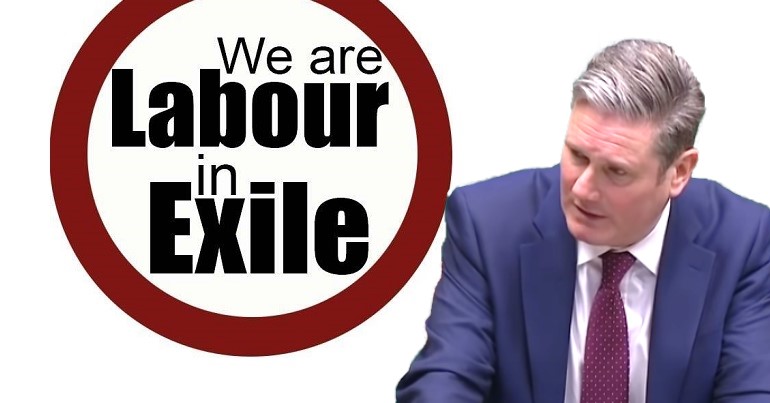 THIS ARTICLE WAS UPDATED AT 2:30PM ON SATURDAY 23 JANUARY TO REFLECT AN ERROR. IT ORIGINALLY STATED NORMAN THOMAS WAS THE FOUNDER OF THE GROUP. HE IS, IN FACT, CO-FOUNDER ALONG WITH SEVERAL OTHER PEOPLE

Keir Starmer’s leadership just became a bit more embattled. Because amid the ongoing “purge” of dissenting Labour Party members, a new group has formed. Its aims? To force the leader’s hand to either end the strong-arming of left-wing voices – or face the consequences.

The Canary and SKWAWKBOX have been documenting the ongoing issues within the Labour Party. For example, in the south west it has clamped down on some high-ranking officials from Bristol CLPs. In Bath, the party has put a stop to a meeting to elect new officials. It also barred all motions there, except one which (ironically) marked the death of George Orwell. Then, the whole of the south west Devon Constituency Labour Party (CLP) executive committee resigned en masse. Elsewhere, the party suspended Liverpool Walton CLP’s secretary Alan Gibbons, a prominent member and community activist.

SKWAWKBOX has reported on Starmer allegedly forcing Scottish Labour leader Richard Leonard out of his job. He did this reportedly because of the influence of party donors. Then, The Canary‘s investigations team reported on Labour facing legal action. As Emma Guy wrote:

We can confirm that Jewish Voice For Labour (JVL) has now launched its own legal proceedings into the suspension of CLP members and an alleged ban on discussing motions relating to antisemitism within the Labour Party. JVL is also fighting a ban stopping members from passing motions of solidarity with former labour leader Jeremy Corbyn

But now, another suspended CLP member is taking things one step further.

As The Canary previously reported, Norman Thomas was chair of South Thanet CLP. But the party suspended him in December 2020 – giving no reason at the time.

People are being punished for simply carrying out their duties as elected officers. We have to take action to fight these outrageous suspensions. This is a battle for justice, free speech and democracy in our party.

We are seeing a planned purge of left wing members of the party. By suspending officers the Starmer leadership is hoping to demoralise people and get them to resign. Many are going. But I think we should stay and fight for the party we believe in. The battle has only just begun.

So, Thomas has helped formed a new group.

It is called Labour in Exile Network (LIEN). As SKWAWKBOX reported, Thomas co-founded it in December 2020, along with several other suspended/expelled members. And as Guy previously noted, the group already has around 500 members. It’s important to note the aim of the group is not to form a new political party. Thomas previously told The Canary:

We are not aiming at forming a party at all.

The group will be holding a launch conference on 27 February. You can register to attend this via Zoom, here. But now, LIEN has given a “notice” to Starmer. Thomas told The Canary:

Our former leader Jeremy Corbyn and many party officers have been the victims of a gross injustice — and we will not cooperate with our party bureaucrats until this injustice is righted.

We the undersigned members of the Labour Party demand:

• the restoration of the whip to Jeremy Corbyn;
• the reinstatement of all Labour Party members wrongly suspended or expelled since the appointment of the current general secretary;
• a review of all previous suspensions and expulsions imposed during the previous leadership;
• a root and branch reform of the deeply flawed complaints and disciplinary processes of the party;
• and an immediate restoration of the right of constituency parties to freely discuss and pass motions on political issues as they see fit.

Until these demands are met we will pursue a policy of non-cooperation with the party’s general secretary, regional officials and the governance and legal unit, and we will absolutely refuse to comply with any advice, guidance or instructions from any of the above which we consider unfair and discriminatory.

As members of the labour movement we are taking immediate, collective action in solidarity with our comrades who have been unfairly punished.

The notice doesn’t pull any punches. But it also is unrepentant – giving both Starmer and suspended members very little wriggle room. Thomas told The Canary:

I can see this dispute going two ways. One way is, our left wing activists will be picked off one by one. They will be expelled, cowed into silence or leave the party in disgust.

The other way is — we say this is our party and we aren’t going anywhere.

The future of our cause totally depends on the readiness of the members to fight for the Labour Party they believe in, for the socialist policies Jeremy Corbyn has championed. They can’t suspend or expel us all.

United we stand and if enough of us stand united we can’t lose.

The Labour machinery’s campaign against the left continues to intensify. So, what Thomas and LIEN have done may be a game-changer. Because as with everything the left wing does, organisation is crucial. But equally important are the notions of unity and solidarity. And LIEN is looking like it will have those in droves.