Oil, tanks, and a 2am tweet: what the Nazanin Zaghari-Ratcliffe affair tells us 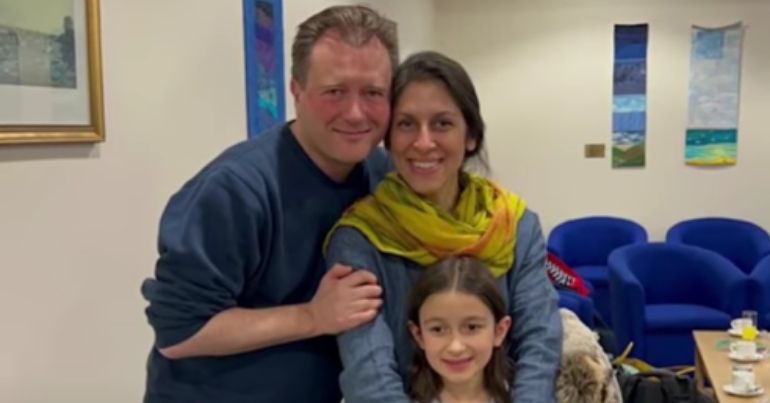 Six years after it started, the Nazanin Zaghari-Ratcliffe affair has come to a close. Sort of. Zaghari-Ratcliffe, a dual-citizen of Iran and Britain, was first arrested in April 2016. Since then she has spent periods both in jail and under house arrest accused of espionage by the Iranian authorities. She denied the charges.

Insiders have long claimed that Zaghari-Ratcliffe’s imprisonment was less about espionage and more about debt. Specifically a long-running row between the British and Iranian governments about an arms deal for British tanks dating back to the 70s.

Richard Ratcliffe, Zaghari-Ratcliffe’s husband, fought a long public campaign for her release. On 16 March 2022 she was finally released and flown home alongside another released prisoner, Anoosheh Ashoori.

The current foreign secretary Liz Truss was on hand for a photo opportunity. Perhaps tellingly, the image was tweeted from her account at 2.16am. Hardly ‘Prime Time’ – but then the Tories have a lot to hide when it comes to this case:

Great to see both Anoosheh and Nazanin in such good spirits. An emotional moment for both families as they welcome them home. pic.twitter.com/ewtFeaYJ1s

It’s not clear if the Ratcliffe’s will meet the prime minister Boris Johnson too. Any such gathering would likely be emotionally charged. The Tories – and the Foreign Office in particular – have good reason to avoid too much scrutiny. It was, after all, during the prime minister’s stint as foreign secretary that Johnson made Zaghari-Ratcliffe’s situation much worse.

In 2017, Johnson made comments that Zaghari-Ratcliffe had been in Tehran training journalists. A suggestion which the Iranians claimed supported their view that she was a spy.

It was suggested, including by her husband, that Johnson’s comments directly compounded her predicament. During his hunger strike outside the Foreign Office in 2021, Richard Ratcliffe told the press that Johnson’s words were used by Iran to propagandise against his jailed wife.

Context matters here. The images of the Ratcliffe’s reunited are heartwarming. But there have to be questions about timing. For one thing, it appears the UK has finally paid its debt to Iran. The Guardian reports that £394m was paid on Monday

The debt related to a £650m order for Chieftain tanks and support vehicles by the Shah of Iran ahead of the 1979 revolution. These were never delivered. According to the Commons Library the UK recognised the debt was owed:

The UK Government accepts liability for an estimated £400 million debt owed to Iran. The debt is for undelivered armoured vehicles and tanks, originally ordered by the Shah but cancelled by the UK in response to his overthrow in the Iranian revolution of 1979.

But, they rejected the claim that the detention of Zaghari-Ratcliffe was linked to the deal:

However, the Government argues this is a separate issue to the detention of British-Iranian dual nationals and also rejects any link between detainees and the nuclear talks.

Now it seems that the UK has accepted that without payment, its highest profile detainees were going nowhere.

A danger to us all

Richard Ratcliffe himself wrote last year that Britain’s highly unaccountable arms trade is a danger to all citizens. He told Declassified UK in May 2021 that:

the money withheld by the British government is the reason Nazanin has been detained in Iran since her arrest in 2016 while on a family holiday with our then 22-month old daughter, Gabriella.

He claims the Iranian authorities themselves said so:

A few weeks after she was arrested, Nazanin was told by her interrogators from the Islamic Revolutionary Guard Corps (IRGC) that while there was “nothing in her case”, she was going to be held for leverage with the UK. Gradually they revealed she was being held to recover a debt.

That someone can be held for leverage in an arms deal that went sour decades ago should concern us all. And the UK’s arms trading is highly indiscriminate. We sell to virtually anyone: be they authoritarian allies like Saudi Arabia and notional enemies like Russia.

Yet payment of the debt is only part of the story. And a glance at the headlines will tell you why. Russian oil is going to be less accessible as sanctions pile up following the Putin regime’s invasion of Ukraine. Other sources must be found. It follows that a thaw between the West and Iran is on the cards.

Certainly, Iranian politicians seem to think so. A statement published by Al Jazeera Wednesday, and signed by 160 parliamentarians, said due to Ukraine, Iran had the upper hand:

Now that the Ukraine crisis has increased the West’s need for the Iranian energy sector, the US need for reduced oil prices must not be accommodated without considering Iran’s righteous demands.

The sense seems to be that Iran is now well positioned to push for, and benefit from, refreshed nuclear talks with the US and others.

Pawns in a game

It is heartening to see Nazanin Zaghari-Ratcliffe back home with her family. And her story can tell us much about geopolitics today. Hers is an extreme example of how all ours fates turn on the whims of global capital – in this case, the fossil fuel and arms trades – and of a set of blundering ruling class buffoons, for whom we are all just pawns in a game.