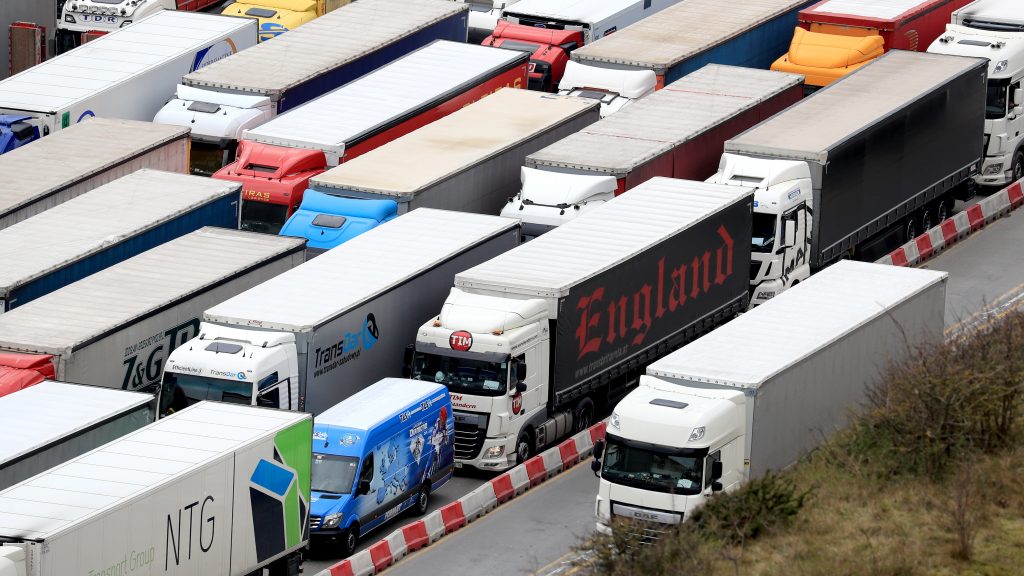 Lorry drivers in Dover face the “absolutely outrageous” scenario of sitting in two-day long queues without food or toilets if the UK crashes out of the EU, hauliers have warned.

A Road Haulage Association (RHA) spokesperson said a no-deal Brexit means thousands of drivers may end up waiting in queues of more than 48 hours with no welfare facilities.

The RHA is among organisations meeting cabinet ministers in Dover later to discuss preparations for Brexit at the border.

Duncan Buchanan, policy director for the RHA in England and Wales, will meet Chancellor of the Duchy of Lancaster Michael Gove, Home Secretary Priti Patel and Transport Secretary Grant Shapps at the Port of Dover.

He told PA: “I think people underestimate the scale of the complexity of it.”

Speaking about potential delays in Dover in a no-deal scenario, he said: “I believe the reasonable best case scenario that authorities are working on is between 24 and 48 hour delays on all vehicles.

“All vehicles, all lorries going through the port. I think that’s possibly optimistic.

He added that another concern is that there is no provision for how vans are going to be dealt with.

“We have huge road delays. We have serious problems. If a lorry is caught up 24 hours on the motorway, where does the driver go to the toilet?

“They’re putting in no welfare provisions whatsoever. This is absolutely outrageous that drivers can be treated like they’re completely unimportant.

“There needs to be proper facilities for drivers so that their welfare is looked after,” he said.

Buchanan said there are 60 working days to get this sorted, adding: “It needs to be done as a matter of speed.”

He said he has heard people say drivers will need to bring “picnic hampers” due to delays.

“It’s ridiculous,” he said, adding: “The idea that they’re going into the bushes to go to the toilet on the side of a motorway, I mean, what planet is that on?”

He also pointed out the legal issue whereby drivers of heavy goods vehicles are limited in the amount of hours they are allowed to drive in a day.

“So if they run out of working hours, they’re not allowed to drive so the queue will go in really funny and odd ways, because people are going to have to overtake people who are taking rests.

“These are issues I wish I could say to you have been sorted out and have been addressed properly but they’re not,” he said.

Asked if it is possible to sort these issues out in 60 days, he said the first priority is to minimise the queues.

“What we need to do is to have good accurate and complete information so the lorries can get on the ferries and get off the ferries really quickly without anyone being turned around.

“If we get that done then the problem is minimised.

“That’s why we need the clear instructions from government, the training, provision, online training for traders, we need end to end journey explanations of who does what.

Operation Brock has already been deployed to keep the M20 open in both directions in Kent.

In the event of disruption in Dover, lorries travelling to mainland Europe will be held on the coastbound carriageway while a contraflow system will operate across other lanes.

The previous method for dealing with lorries queuing, known as Operation Stack, meant sections of the motorway were closed and caused chaos for local journeys.