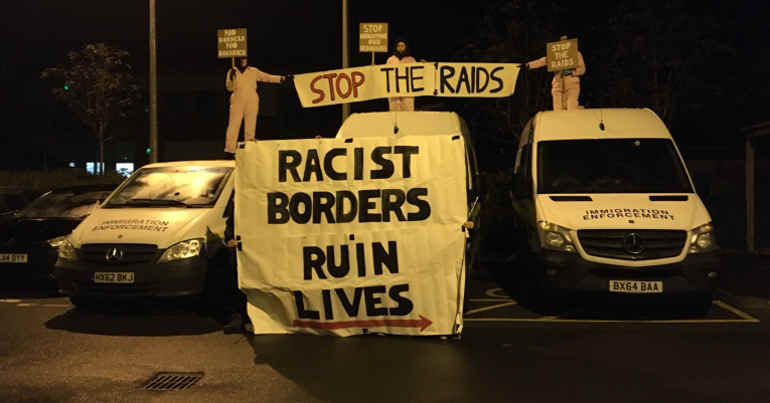 Early in the morning on Thursday 24 October, a group of activists from Bristol Rising Tide and Reclaim the Power took direct action to prevent Immigration Enforcement vans from leaving the Home Office’s depot in Portishead, near Bristol.

Their action came a day after public anger and grief as 39 people, including a teenager, were found dead in a lorry container in Essex. The 39 people are presumed to have been immigrants trying to enter the UK.

Direct action against the Home Office

According to a press release:

People are occupying the roofs of Immigration Enforcement vehicles and stopping them from leaving the Home Office building in Portishead.

The action is designed to prevent dawn immigration raids across the South West this morning. Around fifteen people dressed in pink overalls, holding placards saying “stop the raids” and “stop kidnapping our neighbours”, are part of a national day of protest against the institutional racism of the government’s Hostile Environment policy.

The activists continued by saying:

When Theresa May was Home Secretary in 2012, she announced that her intention “was to create here in Britain a really hostile environment for illegal migration”

Immigration raids – in which people are targetted by Immigration Enforcement officers, taken from their homes, streets or places of work and taken into detention centres – are a part of this policy.

Raids “that tear people from their homes and communities”

The Home Office conducts raids from this building, with these vehicles, that tear people from their homes and communities brutally and barely legally… Last year Mustafa Dawood, a young Sudanese man, died fleeing in fear from one of these vans. There has still been no inquiry into his death.

Mustafa Dawood died falling from a roof in June 2018 during an immigration raid on his place of work.

While our country wrestles with the Brexit identity crisis caused by our colonial past, people across the world continue to have their lives torn apart by the smash and grab approach of UK based companies and British foreign policy. When they come here fleeing war and climate chaos they are punished again by racist policies determined to turn these survivors into criminals. It’s perverse and horrific and has to stop,

The action was intended to encourage people to resist immigration raids. Alex Green of Reclaim the Power said:

Migration is beautiful and enriches us all. We encourage everyone to report raids to each other when they happen and to act together to limit the damage they can cause, for example by contacting your local anti raids network and making sure everyone knows their rights.

“These systems struggle to operate without community consent”

In October 2018, around 100 people staged a spontaneous seven-hour protest in Easton, Bristol, to prevent Immigration Enforcement officers from taking a local man from the shop where he worked. He was later released.

Last [October]’s resistance to a workplace raid in Easton, Bristol, brought the neighbourhood together in opposing the Home Office. These systems struggle to operate without community consent.

The Canary received this update from the activists after the protest:

The protest was designed to prevent a dawn raid occurring and lasted for four hours. It wrapped up at 9am to ensure it didn’t impact on anyone forced to ‘Sign’ at the Home Office building adjacent to it.

“We are witnessing the realities of a harsh immigration system”

On 23 October, The Canary reported that “a murder investigation has been launched after 39 bodies were found inside a lorry container on an industrial estate”. Those who died are believed to be immigrants from China trying to enter Britain.

The loss of 39 lives is a devastating tragedy and our thoughts are with their families and friends as we wait for details to emerge of who these people were, and where they came from. It is evident that we are witnessing the realities of a harsh immigration system that led these desperate people to that lorry and ultimately to their deaths. We urge a change in the system to allow safe and legal routes for those who migrate and are seeking asylum.

Samphire supports people released from immigration detention in the UK.

Featured image via a press release from Bristol Rising Tide