Fresh bid to restore powersharing at Stormont gets under way - Canary 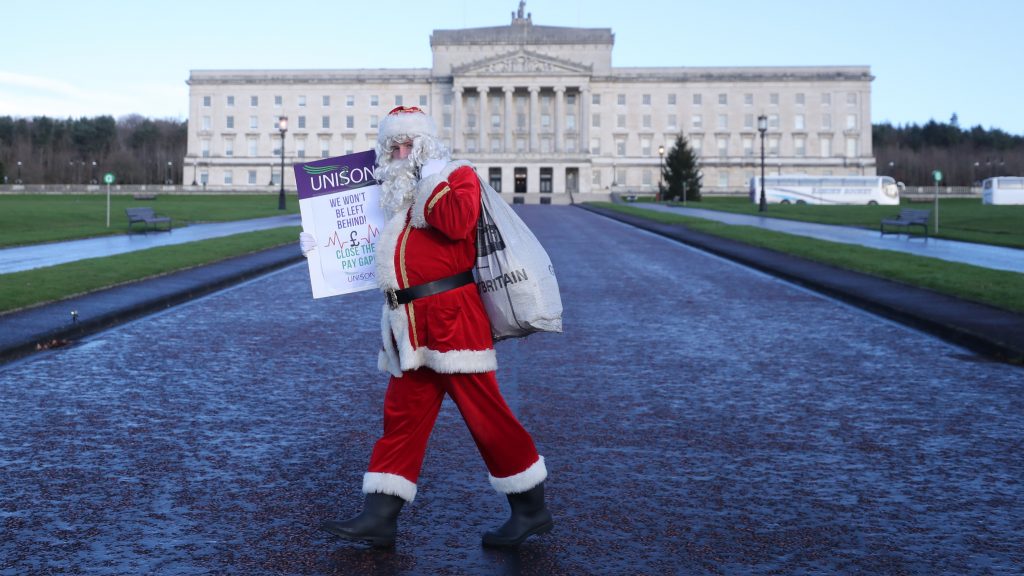 A fresh bid to restore Stormont’s crisis-hit institutions is under way.

Northern Ireland secretary Julian Smith has embarked on a round of bilateral meetings with the leaders of the five main parties, in an effort to kick-start a new talks process ahead of a looming deadline in January.

If a devolved executive is not resurrected by 13 January, legislation that gives the civil service extra powers to run the region’s floundering public services will expire, and Smith will be under a legal duty to call a snap Assembly election.

The region’s two main parties, the DUP and Sinn Féin, go into the latest negotiations on the back of disappointing election results, many interpreting the general election as the public passing judgment on the parties’ failure to restore the Assembly.

A spiralling crisis in the region’s health service has heaped further pressure on the politicians to get back to work in a devolved legislature.

Healthcare workers will go on strike on Wednesday in protest at pay restraints and staffing shortages.

Smith’s first meeting on Monday was with the Alliance Party, followed by exchanges with the SDLP and Ulster Unionists.

Irish language activists and healthcare workers staged separate protests outside Stormont House as the talks were taking place inside.

The demonstrations had a festive theme as Unison health union members sang carols, with the words changed to highlight their demands for pay parity with workers in the rest of the UK.

Scores of children from Irish language schools wore Santa hats as they marched to the front of Parliament Buildings calling for legislation.

After her meeting, Alliance Party leader Naomi Long said a deal could be done ahead of the middle of January.

“We have three working weeks to deliver, so this week can’t be about people sitting around and licking their wounds or preening themselves after last week’s elections.

“The elections are over, we are now down to the hard graft of getting an Assembly functioning.

“That means looking at difficult choices and reforms that need to be undertaken so that when that Assembly is up and running – and I believe it must be – that it is actually fit for purpose and capable of delivery.

SDLP leader Colum Eastwood said the electorate had delivered a message to the politicians that they needed to get back to work.

“The only way you do that is by getting into government and taking responsibility.”

He added: “The idea we can be off the pitch any longer is just not acceptable any more. I think the public have made it very, very clear. They want Stormont back up and running.”

Ulster Unionist leader Steve Aiken said he had raised concerns about the health service during his meeting with Smith.

“The one thing we must see is a responsible and accountable government brought back and one where the challenges of the past are identified and that is going to mean significant changes across the board and if we can’t get reformation in the process we have to ask ourselves what’s the point of bringing it back.

“If we can’t bring it back by the middle of January we must have proper government in Northern Ireland – if that is direct rule, then it’s direct rule.”

Aiken said it was unlikely a deal would be struck before Christmas.

Irish Foreign Minister Simon Coveney will also be at Stormont on Monday for talks.

Powersharing imploded almost three years ago amid a row about a botched green energy scheme.

That rift soon widened and refocused on long-standing disputes over issues such as the Irish language and same-sex marriage.

With same-sex marriage having been legislated for at Westminster earlier this year, the wrangle over the Irish language remains the key stumbling block.

Sinn Féin has made an Irish Language Act a prerequisite of any deal to restore devolution.

The DUP has expressed a willingness to legislate to protect the language, but only as part of broader culture laws which also include the Ulster Scots tradition.

Ahead of the renewed political talks involving the parties, senior health leaders, representing doctors and nurses in the north of Ireland, issued a statement outlining their serious concerns about the situation in the health and social care system.

The groups called on politicians to get the devolved institutions up and running again with immediate effect.