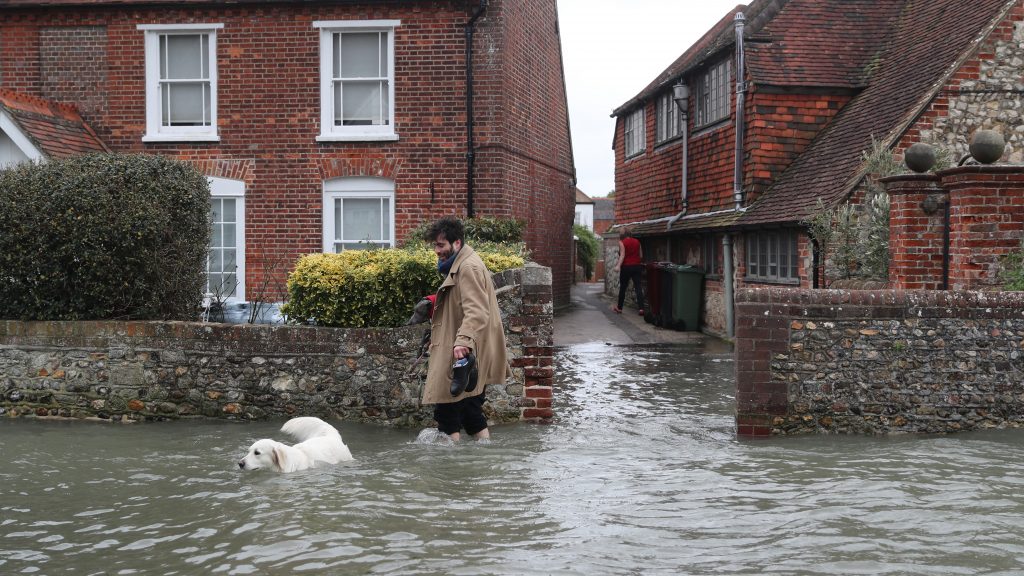 A “perfect storm” of heavy rain, strong winds and melting snow could leave hundreds of homes across the UK flooded this weekend, experts have warned.

Storm Dennis is forecast to batter large swathes of England, Scotland, Wales and Northern Ireland with 70mph winds and up to 140mm (5.5inches) of rain in some areas.

The Environment Agency (EA) said the flood impact from the weather system is likely to be worse than last weekend’s Storm Ciara due to rain falling on already saturated ground.

Meanwhile Paul Davies, principal meteorologist at the Met Office, said much of the UK can expect between 20mm to 40mm of rain over the weekend, increasing to 50mm to 80mm in some areas.

Davies said up to 140mm would not be “impossible” over the high ground of Wales and Scotland.

The “main areas of concern” on Saturday are north and south-west England, and Wales, followed by south-east England on Sunday.

Storm Ciara, which hit the UK on Sunday, left 800 properties flooded in England alone, according to the EA.

John Curtin, the agency’s executive director of flood and coastal risk management, said Cumbria, Lancashire and Yorkshire were the areas he was now most “concerned” about.

“This one (storm) could be a step up from what we have seen before,” Curtin said.

“We had a big storm last weekend, (we now have) saturated catchments, snowmelt and rainfall, so it is a perfect storm.”

He said the snow which fell in parts of England following Storm Ciara is likely to melt as the rain arrives on Saturday.

Curtin said communities will get about eight hours warning ahead of any flooding over the weekend and urged people to sign up to the agency’s flood warning system.

He said areas along the River Severn in Shropshire and River Ouse in North Yorkshire could feel the impact of the rain on Monday and Tuesday.

Davies said: “With Ciara the rain was heavy, but swept through. The concern with Dennis is the longevity of the rainfall.”

About 2,000 properties have been affected by flooding since November last year, while 64,000 have been protected, Mr Curtin said.

Curtin said about a quarter of the agency’s 400 river gauges – used to measure water levels – have broken their highest-ever record in the past 10 years.

He said just under 10% of the agency’s gauges had recorded their highest-ever water levels this winter alone.

“One of the trends we are seeing, which is really quite worrying, is how frequently we are seeing weather records being broken,” Curtin.