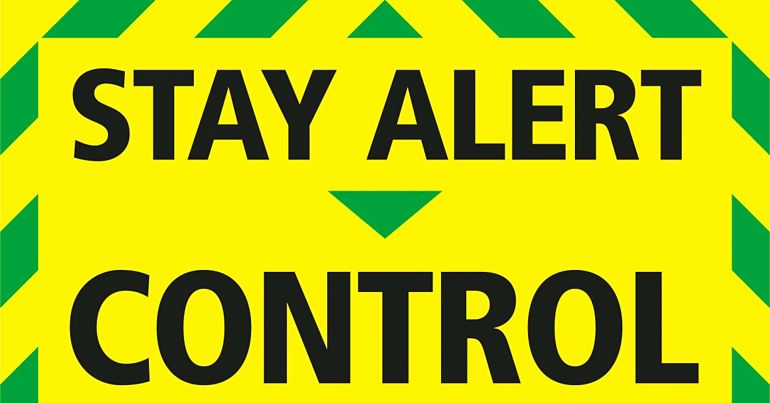 When announcing the lockdown on 23 March, Downing Street introduced the slogan “Stay at home”, which was well adhered to and praised for its clarity.

But when prime minister Boris Johnson spoke on 10 May about easing the restrictions for England, new messaging urged the public to “stay alert” to the virus, a slogan that has been criticised for being too vague.

The devolved administrations refused to adopt the messaging at the same time and hit out at Johnson for failing to consult them over the change.

Additional advice has since started to appear, saying: “Keep our distance, wash our hands, think of others and play our part. All together.”

Asked why the extra messaging was being introduced, justice secretary Robert Buckland said there is a need to explain the “different elements” involved.

He told Sky News: “Stay alert is very much still part of what it is all about.

“I think what we’re trying to do is explain underneath that general direction what that means.

“Of course the different elements to staying alert, which include washing hands, keeping our distance, builds up to that general approach which is that we all must be very much aware not only of each other but what we can do in order to minimise the inadvertent transmission of this terrible disease.”

The Cabinet minister said “stay alert” is “more difficult” to explain than “stay at home” because it involves “more nuanced messages”.

“I think ‘stay at home’ had the clarity and simplicity of a direct instruction; this was always going to be a more difficult moment when we had to give more nuanced messages and to encourage everybody to take those small steps out of the full lockdown,” he added.

“It is going to be a tough ask; it is a very difficult time for everybody and the government doesn’t pretend anything otherwise.

“We have to keep developing those messages and that’s why you’re hearing that kind of detail.”

Critics of the “stay alert” message include Susan Michie, professor of health psychology and director of the Centre for Behaviour Change at University College London.

Prof Michie is a member of the SPI(B) subcommittee of the Scientific Advisory Group for Emergencies (SAGE) – the body that has been instrumental in guiding ministers through the coronavirus response – and said last week that the new direction is not clear enough.

She said: “I think the concern with the actual slogan – ‘stay alert’ – is it’s not very obvious what alert means, what people should be alert to, and what they should do if, when being alert they identify something that isn’t defined.”