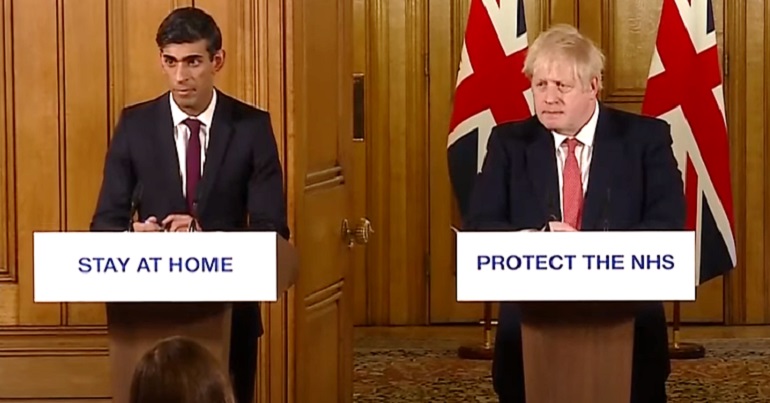 The Trades Union Congress (TUC) has issued a stark warning to the government over the coronavirus (Covid-19) pandemic. It comes amid growing concerns about the state of the UK economy and a possible recession. And the TUC is very clear as to what path the government needs to take. And it involves not making the same mistakes of the past.

City A.M. reported that the UK economy is in free fall. Data for March showed that gross domestic product (GDP) fell by a record 5.8%. The deputy governor of the Bank of England warned that unemployment could hit 1980s levels. And the boss of the Office for Budget Responsibility (OBR) said April’s figures could be dire. All this led chancellor Rishi Sunak to warn that:

We are likely to face a severe recession, the likes of which we haven’t seen

But so far, the Tory government’s plan looks worrying. The Canary previously reported that Sunak’s initial ideas for protecting the economy include potential public-sector pay freezes, an end to pension increases, and tax rises. But as we noted:

In short, if a government raises public sector pay and reduces taxes, people have more money to spend. In an economy like the UK’s, where it is reliant to the tune of hundreds of billions of pounds on people buying stuff, it would seem economically incompetent to restrict this.

Now, the TUC has proposed an alternative ‘road map’ for economic recovery. And it doesn’t involve pay and pension freezes.

In a press release, TUC general secretary Frances O’Grady warned that we needed to ‘learn the lessons’ of the previous decade that left the UK unprepared, economically, for the pandemic. She said:

The UK’s weak economy and ten years of cuts left our country unprepared for coronavirus. Only the dedication of millions of individual workers kept our country going.

Let’s learn the lesson. Together, we can work our way safely out of this recession.

The TUC has researched how the UK economy recovered after previous recessions. And it found that the strongest economic recoveries were, on the face of it, due to high public spending. For example, the strongest recovery was after the stock market crash of 1929 and great depression: 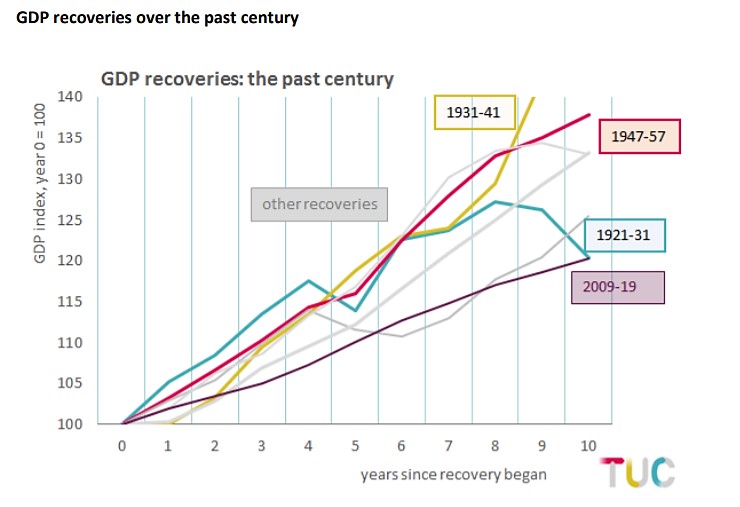 The worst economic recovery was after the 2007/08 financial crisis, a period of Tory-led austerity. So the TUC says that, to make sure the economy does bounce back after the pandemic, the government needs to spend to invest.

The TUC noted that:

The evidence from the post-war recovery is that this investment for growth recovery plan can pay for itself. Millions of working families with higher disposable income create the economic demand needed for strong growth and healthy public finances. Stronger public services and an effective safety net will support people to start and grow businesses, and will better protect against a future pandemic.

And it has a six-point plan:

The devil in the detail

You can read the TUC’s full report here. It outlines measures which the TUC believes are needed to ensure a fair economic recovery for all. Some of these include:

But on top of the report, the TUC also discussed separately the realities that the pandemic has exposed in UK society.

As policy and campaigns support officer Alex Collinson wrote, coronavirus has put into sharp focus the gaping inequalities that exist in our country. He noted that:

Covid-19 is far from the great leveller some would have us believe. The virus doesn’t discriminate – but the UK labour market certainly does.

Some people have been lucky enough to spend the last two months working from the comfort of their homes on full pay. Others have had no choice but to continue working as normal, either because of the type of work they do or because they can’t afford not to.

Some will have saved hundreds on reduced transport costs. Others have been so strapped for cash that they’re having to get by without essential goods, take on debt, or turn to our broken social security system for help.

This crisis has exposed – and exacerbated – glaring inequalities in the UK labour market.

But it’s not just within the labour market that these inequalities have been amplified.

For example, learning disabled people have been dying of coronavirus at a higher rate than people in care homes. It’s led one charity to say learning disabled people had been “forgotten” during the pandemic. Then, financially, many single parents reliant on welfare will have been hit harder than two-parent families. Also, charities have accused the government of putting disabled people’s lives at risk with its approach to the pandemic. And the government has now thrown homeless people and rough sleepers under the bus. The point being that all these groups were already hit hardest by the previous rounds of Tory austerity. Now, their issues have just been compounded.

O’Grady summed up the report by saying:

At its heart is good jobs. Jobs in a reborn UK manufacturing sector… in a social care sector finally getting some respect. Jobs in the green tech of the future. Let’s rebuild our country through hard work, determination and investment in all our futures – not cuts to spending, deregulation and tax breaks for millionaires and bosses.

Now, the ball is in the government’s court. Either it can repeat the same mistakes of the previous decade, or it can take stock of how previous actions led us, in part, to the economic and social crisis we’re now in. Because there is clearly another way. And the TUC believe it’s one that would benefit us all.