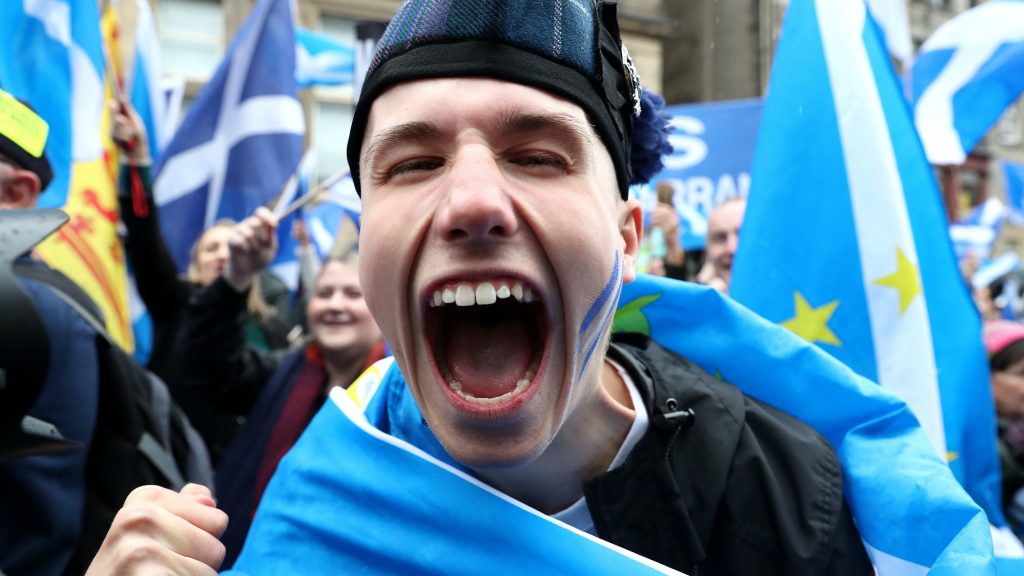 Support for Scottish independence has reached a record high of 55%, according to a new poll.

The latest research by Panelbase found the results of the 2014 independence referendum – when 55% of Scots voted to stay in the United Kingdom – were reversed.

Pro-independence organisation Business for Scotland commissioned the poll, with chief executive Gordon MacIntyre-Kemp hailing the results as a “huge landmark” showing the “writing is very definitely on the wall for the union”.

Panelbase questioned a total of 1,011 people across Scotland between 12 and 18 August for the research.

Overall, 51% of those questioned said they support independence, 42% said they would vote to stay in the UK and 7% of voters were undecided.

When undecided voters were excluded, 55% favoured Scotland leaving the UK, with 45% preferring to stay in the union.

MacIntyre-Kemp said: “The reversal of the 2014 result is a huge landmark – 55% Yes will send shockwaves throughout the political world.

“There is no conclusion to draw from this new set of data other than the writing is very definitely on the wall for the union.”

He added: “The referendum that will be demanded following May 2021 Holyrood elections, on these figures, would start with Yes to independence commanding a 10% lead.

“Independence is now significantly the majority decision of the people of Scotland and its momentum looks solid.”

A second poll published on 19 August by Savanta ComRes found support for independence at 54%, when undecided voters are removed.

The polling firm also asked participants about their voting intention in next year’s election and put the SNP at 43%, the Tories at 21% and 16% for Labour.

The Scottish Greens were on 10% in the study, with the Lib Dems at 8%.

With the prime minister repeatedly ruling out having a second independence ballot, Brown said: “Boris Johnson’s attempts to deny the right of the people to decide their own future is now utterly unsustainable.

“When we look at Boris Johnson’s handling of coronavirus, and his Tory government’s contempt for all things Scotland, it is no wonder that the majority of voters in Scotland want to make their own decisions on the future of our country.”

He added: “With consecutive polls putting support for independence above 50%, it’s clear this is not a trend but the established position of the Scottish electorate.”

SNP leader and first minister Nicola Sturgeon has confirmed a pledge to hold a second independence vote will be in her party’s manifesto for next May’s Holyrood elections.

He said: “I’m delighted to see yet another poll show that ever more people in Scotland believe that it is time to choose independence.

“It’s no surprise that momentum towards independence continues to build in the face of utter contempt shown to Scotland by the Westminster government.

“The people of Scotland deserve so much better and by taking our future into our own hands we can build that better Scotland.”