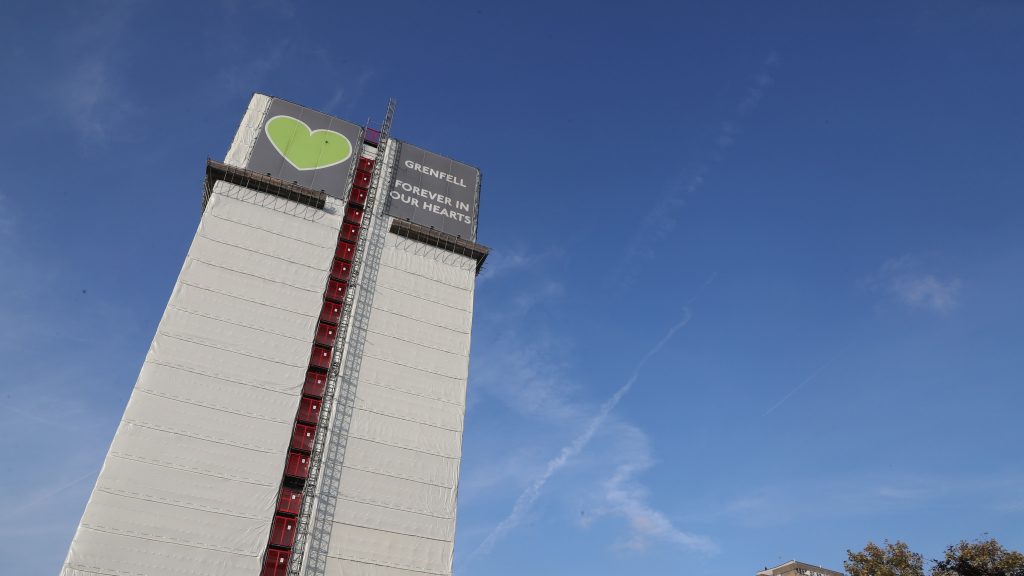 Dangerous cladding will not be removed from all at-risk buildings until seven and a half years after the Grenfell Tower tragedy if the work continues at its present rate, government data has revealed.

Analysis of figures released by the Department for Levelling Up, Housing and Communities shows that it will take another three and a half years to remove the cladding from high-rise buildings. The data, which is released monthly – with the most recent document covering up to 30 September – shows 30 buildings have yet to have work start at all on removing dangerous cladding and 168 are still being worked on.

In some of those cases, the cladding had been removed or the works were finished but not signed off. This is down from 45 buildings that still had unsafe cladding and where no work had started to remove it in December 2020, with a further 201 buildings still undergoing work to remove ACM cladding.

A further 61 buildings have now had their remedial work completed, meaning they are free from unsafe cladding.

The government said the new Levelling Up, Housing and Communities secretary Michael Gove was looking “afresh” at this issue to ensure work was being done as soon as possible. But if the rate continues, the Liberal Democrats said it would take another three and a half years to complete – making the full removal seven and a half years since the Grenfell Tower fire which killed 72 people in 2017.

The party has demanded the chancellor put the removal of the cladding at the heart of his Budget next week.

After the Grenfell tragedy the Conservative government said ‘never again’, yet four years down the line there are still buildings with unsafe cladding on the Tories’ watch.

It is an utter disgrace that it could take yet another four years to finish the job. This is an appalling dereliction of duty by the Conservatives. Their handling of the building safety scandal has been nothing short of scandalous. People deserve to live in safe homes, yet years after an avoidable tragedy the Government is shamefully dragging its feet and turning its back on tenants and leaseholders.

Four years on from the Grenfell tragedy, the Government’s response to the building safety crisis has been beset by inertia, indifference and constant delay.

From fixing ACM cladding to protecting leaseholders from the cost of remediation, the Government have missed every deadline and broken every promise. Meanwhile, innocent homeowners are trapped in unsellable homes.

The figures also show that only £79m of the Government’s £200m fund to support private leaseholders with removing dangerous cladding has been spent so far.

We will not compromise on building safety, and building owners must take swift action to fix dangerous cladding. The Government will fund every eligible application to the Building Safety Fund. So far we’ve processed over 600 building applications, with estimated remediation costs of £2.5 billion, and we are progressing the remainder as quickly as possible.

Of high-rise residential buildings identified as having unsafe ACM cladding at the beginning of 2020, 97% have been fully fixed or have works under way, backed by over £5 billion. The new Secretary of State is looking afresh at work in this area to ensure we are doing everything we can to protect and support leaseholders, and he will not hesitate to take further action if necessary.

But campaigners said there was a “regular massaging” of the statistics. Giles Grover from the group Manchester Cladiators said:

The Government completely failed to meet its initial ACM remediation target date of June 2020 and subsequently pushed this back to the end of 2021 yet, at this rate, that deadline will have to be pushed back once again meaning thousands of people in those buildings are still trapped in limbo.

Innocent people are being betrayed by the Government’s continuing warm words and vague promises that are never backed up with firm action on the ground.

We urge the new Secretary of State, Michael Gove, to please not repeat the mistakes of his predecessor – he has a mandate from the Prime Minister to deliver a long-lasting and effective solution to this crisis and the whole approach being taken by the Government must be reviewed and refreshed so that it is truly fair, fit for purpose and delivers the funds at true pace.

Mr Gove has a reputation as a problem solver and we need him to properly listen to and engage us to help him solve this crisis so innocent residents can finally begin to move on with our lives. Without his doing so, we fear we will be trapped in this nightmare for years, if not decades, to come.