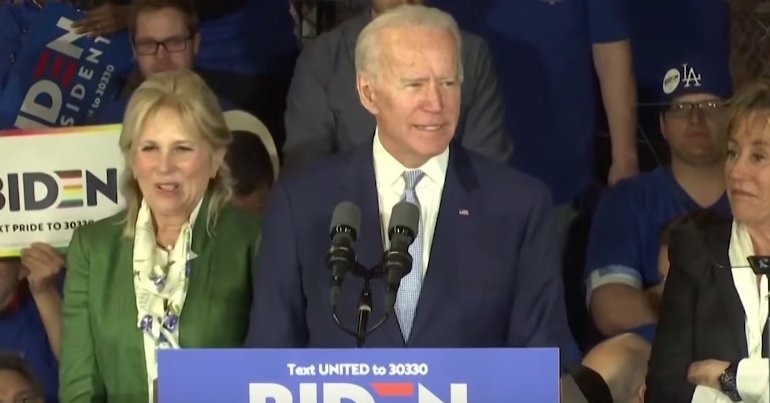 After a very rocky start to his campaign, Joe Biden did well in the states that voted on so-called Super Tuesday. The press could hardly contain themselves, gleefully announcing Biden as the ‘Joementum’ front-runner in the race against Bernie Sanders to be the Democratic nominee.

But the media wasn’t the only industry celebrating Biden’s surge. In a revelation that surprised no-one who’s been paying attention, the stock markets showed private healthcare stocks ‘surged’ the morning after Super Tuesday. So that industry must have been pretty pumped by Biden’s wins too:

It’s a win… for those with the big bucks

As the Independent reported, after the show of support from voters for Biden on 3 March, healthcare stocks ‘surged’. Private healthcare firm UnitedHealth saw the value of its stocks rise by over 12%. Meanwhile, the Dow Jones Industrial Average “traded 577 points higher”, according to the Independent. The financial markets overall didn’t do too badly either:

What a thundering indictment of the Democratic Party establishment https://t.co/951wFgFrng pic.twitter.com/VKfdD4XkTe

The opposite is usually true when Sanders storms ahead. For-profit healthcare stocks ‘rock‘ when he wins. Because Sanders has pledged to get profiteering out of healthcare in the US by building a “Medicare for All” system. Essentially, he’s offering voters the US equivalent of an NHS.

Bizarrely, given how people voted on 3 March, the majority of people in the Super Tuesday states want such a thing:

Last night voters in 12 states were asked if they back Medicare For All—"a government plan for all instead of private insurance?" All 12 states said yes.

Yet they voted for the guy who said he would increase their premiums (how much they pay for insurance) and ensure that healthcare isn’t “quality” but “affordable” in a speech:

You've gotta hand it to them; the Democratic Party have accomplished the impossible: they've found a candidate who is even worse than Hillary Clinton, and would lose to Trump by an even larger margin https://t.co/zxgvlwfIuf

Biden corrected himself later in the speech to say he would “increase the generosity of the premium tax credit they now get” and provide quality that’s affordable:

Biden does correct himself later to say "quality that is affordable" , but before that he said "not quality, but only affordable". There are better examples of his decline, but if you watch this entire video you will realize that he struggles at long speeches. Its a big problem. pic.twitter.com/dHnYOoXz2z

But, even though Biden’s the favourite for people who make lots of money out of people’s suffering, he doesn’t appear to be a good choice for anyone interested in getting Donald Trump out of office. In fact, the candidate would be easy pickings for the Republican party on numerous fronts. It could, for example, call into question his character for previously spreading falsehoods about his university education:

Despite being a notorious liar himself, Trump's strength is calling out other people's hypocrisy and lies. You need an exceptionally consistent & honest candidate to take down Donald Trump. #BernieBeatsTrump https://t.co/rjTMCW9TU8

Biden excused spouting this nonsense by saying his memory had failed him. But forgetting such fundamental, central details about his university education makes for a possible attack line too. Especially as speculations about his health are already in play:

Serious question for Biden supporters: How do you counter this narrative in a general election? https://t.co/HEPKqYLOnr

Trump could also paint Biden as a corporate, establishment stooge. This was a major part of his strategy against Hillary Clinton in 2016. And Biden is making it pretty easy for him to do exactly that:

No, Joe. The "establishment" are the 60 billionaires who are funding your campaign and the corporate-funded super PACs that are spending millions on negative ads attacking me. https://t.co/XDB8OwJB1L

I guess that means Joe Biden is now up to 61 billionaires supporting his campaign! https://t.co/nF1q4iBh0o

If you are playacting and pretending you don’t know what “the establishment” is, let me show you what it is right here👇🏻https://t.co/X4WJvPh6D0

In short, it seems highly unlikely Biden would emerge as the victor in an election against Trump. He’s exactly the kind of candidate Trump has shown he can win against. Sanders, however, would be a whole different ball game. Recent polling and 2016 polling consistently show Sanders as the favourite among voters against Trump.

Meanwhile, people suspect Trump has already cottoned onto this. They’re warning that’s why he’s currently “pretending he wants Bernie over Biden”, because he knows he’ll wipe out the latter:

Trump is playing Dems by pretending he wants Bernie over Biden – not what he said on secret tape! Yet many are playing along. Trump wants a 2016 rerun vs a DC insider whose weak campaign won't inspire turnout, dogged by corruption charges & pro-war/bank/NAFTA record. It's a trap! https://t.co/pwESPFGkNR

People need to start rallying behind Sanders very, very quickly. Because if Biden gets the Democratic nomination, history looks likely to repeat itself. It’ll be 2016 all over again. The planet and its people, let alone the US’s uninsured citizens who can’t afford healthcare, can not take another four years of Trump.