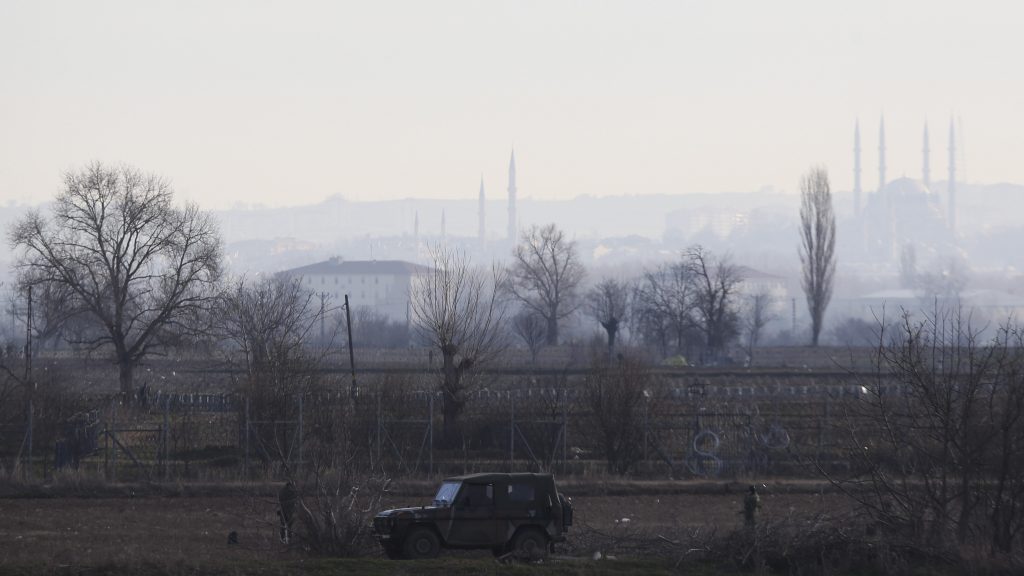 Refugees faced more attacks on the Greek-Turkish border as people attempted to enter Greece, while the European Union’s foreign ministers held an emergency meeting to discuss the situation on the border and in Syria, where Turkish troops are fighting.

Greek authorities used tear gas and a water cannon to repulse an attempt by refugees to push through the border from Turkey in the morning, while Turkish authorities fired volleys of tear gas onto the Greek side of the frontier.

Thousands of refugees have been trying to get into Greece through the country’s eastern land and sea borders over the past week, after Turkey declared its previously guarded borders with Europe were open.

Turkey has said it is deploying 1,000 special forces police on its side of the border to prevent Greek authorities from pushing back refugees who manage to cross into Greece.

Many have been camping out on the Turkish side, hoping to cross despite Greek insistence that its border is closed.

Reporters were being kept away from the border area on the Turkish side, but saw at least one bus full of people leaving the area Friday morning. And four reporters were detained in Turkey trying to cover the unfolding humanitarian crisis.

It was unclear where the bus was headed.

After months of threats, Turkish president Recep Tayyip Erdogan has now said his country will no longer be the gatekeeper for Europe.

He has demanded that Europe shoulder more of the burden of caring for refugees, although the EU insists it is abiding by a deal in which it disbursed billions of euros for care in return for Turkey keeping the refugees on its soil.

Erdogan’s move came amid a Syrian government offensive in Syria’s northwestern Idlib province, where Turkish troops are fighting following Turkey’s invasion into northeast Syria in 2019. Turkey and its extremist allies faced accusations of ethnic cleansing and war crimes following the invasion which also caused great destruction and misery in communities who’d been at the forefront of fighting against Daesh (Isis/Isil) and which had been building a progressive democratic system in the middle of Syria’s brutal conflict.

A ceasefire in Idlib brokered by Erdogan and Russian president Vladimir Putin on Thursday went into effect at midnight.

It was not clear whether the agreement would also affect the situation on the Turkish-Greek border.