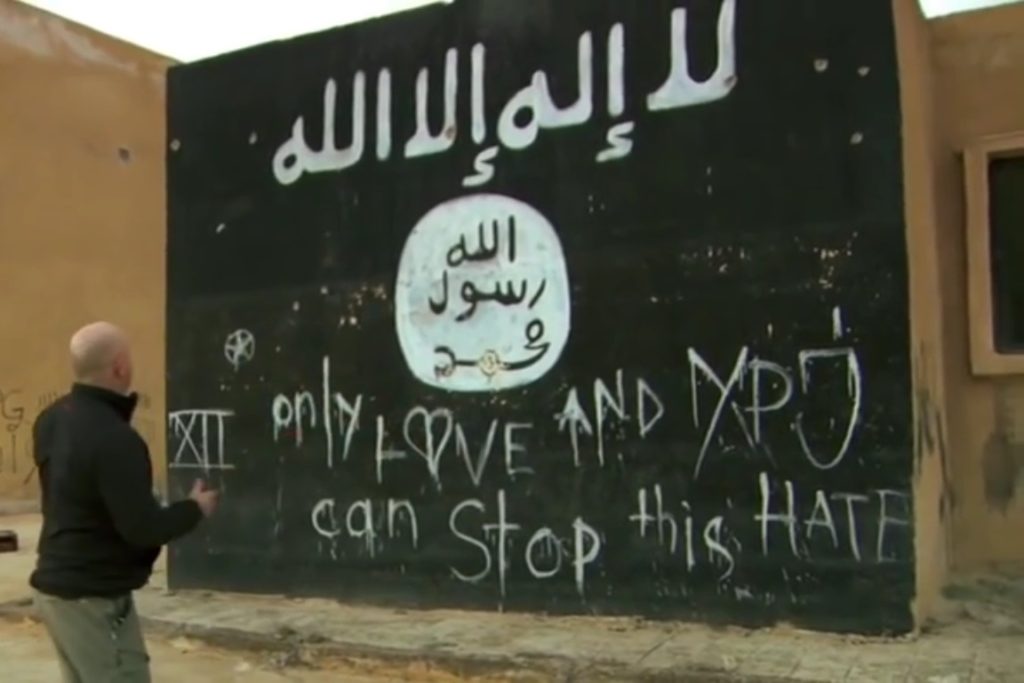 On 14 July, Ross Kemp’s latest documentary saw him praised throughout the mainstream media. But while there were precious gems to be found in the programme, both Kemp and the press really mis-sold its key message – one of a courageous fight for democracy, equality and freedom.

At the end of ‘The Fight Against ISIS’, which saw Kemp travel with forces fighting on the ground against Daesh (Isis/Isil) in Syria and Iraq, the presenter praised what he called “a genuine movement for democracy, equality and tolerance”. Here, he was referring to the People’s Defence Forces (YPG) and the Women’s Defence Units (YPJ) of the autonomous region of Rojava in northern Syria, where a secular and gender-egalitarian experiment in direct democracy has been underway since 2012.

Media outlets, however, managed rather spectacularly to avoid talking about the YPG/YPJ and Rojava – let alone about their progressive political mission. From the Guardian to the Metro, the Express to the Times, and the Mirror to the Telegraph, the focus was almost solely on Kemp’s “brave reporting” and the suggestion that he was “almost killed” while filming the documentary. There was also a rather uniform and unspecific description of ‘the Kurds’ and ‘the Kurdish militias’ as if they were a single group of non-political entities who all thought and acted the same.

‘Kurds’ are not all the same

First of all, Kemp visited Şengal in north-western Iraq, where Daesh had launched a genocidal attack on the local Yezîdî religious community in early August 2014. Up to 5,000 men were killed in the assault, 7,000 women and children were taken captive, and the 450,000-strong district was soon left with just 10,000 residents as locals fled the onslaught.

But what Kemp didn’t mention was that the official army of the Kurdistan Regional Government (KRG) had abandoned the Yezîdî population. It was instead the non-state militias of the Kurdistan Workers’ Party (PKK) and its YPG/YPJ allies which quickly stepped in, rescuing at least 35,000 refugees. Like Kemp, though, media outlets and governments spoke at the time about non-descript ‘Kurdish fighters’, lumping the western-backed KRG and the independent progressives of the PKK and YPG/YPJ together as if they were one and the same.

Meanwhile, in July 2015, the Turkish government destroyed promising peace talks with the PKK – which wants greater autonomy for Kurds in Turkey, and has waged war on Kurdish communities ever since. It has also blockaded and attacked Rojava ever since 2012. The KRG has also placed an embargo on Rojava to prevent its democratic model from spreading across the border into Iraq. In fact, Wikileaks recently revealed that the corrupt Kurdish nationalists ruling in the KRG have been in high-level talks with Turkey about how they can work together to destroy the PKK, and there are allegedly 18 Turkish military and intelligence bases already in Iraqi Kurdistan today.

Just as Kurds are not all the same, neither are Muslims, Arabs, or Sunnis (or any other ethnic/religious group, for that matter).

In the second half of Kemp’s documentary, he spoke to Arabs whose village had been liberated from Daesh by the YPG/YPJ-led Syrian Democratic Forces (SDF) at the start of 2016. One woman told him, when asked about Daesh supposedly being Sunni Muslims:

No, no, no, they are not Sunnis like us. Islam has never ordered us to kill anybody.

One fighter from what Kemp called “a large Kurdish-led multi-ethnic battalion” of the SDF, meanwhile, said that Daesh fighters “just wear the mask of Islam”.

Speaking about Daesh obliging women to wear burqas, one Arab woman spoke about the tradition as a foreign concept, poignantly saying “it’s a Saudi Arabian thing” – a statement that could very much be applied to the whole Daesh ideology. A male villager, meanwhile, also talked very negatively about Daesh, insisting that the group “wanted us to go back to the dark ages”.

With the SDF around, however, these villagers said:

We feel safe now… As long as we’ve got the [SDF] soldiers here, we are happy.

Getting to the heart of the Rojavan model

But Rojavan militias are not only fighting an effective and courageous fight against Daesh expansionism. They are also proposing an alternative political system for the whole Middle East. And while Kemp managed to avoid talking about politics for the majority of his documentary, he really got down to the grain in the last 15 minutes or so.

Visiting the largely Arab town of Tal Abyad (Girê Spî in Kurdish), which the YPG/YPJ fully liberated from Daesh in July 2015, Kemp attended a community meeting. Here, he discovered that:

One of the basic principles of the Rojava government is that people on the ground should make the policies that affect them – so governance from the bottom up.

like most councils across Rojava, this one reflects the diversity of the town. Arabs, Kurds, Turkmen, Armenians, men and women, have all volunteered to rebuild the town traumatised by war.

And one member at the meeting told him:

Arabs were delighted about the liberation by the YPG. We’re all united, it’s one community.

Kemp himself avoided talking about the PKK or its ideologue Abdullah Öcalan, who inspired the Rojavan model, has been compared to Nelson Mandela, and whose picture hung on the wall during the community meeting. But he did express his admiration, saying:

There seems little doubt about these people’s determination to promote equality and democracy. [The Rojavan model] wants to encompass all people… It wants women to have equal standing in society. I admire them for at least attempting to achieve it.

We must not depoliticise Rojava’s fight against Daesh

Two YPJ fighters made it very clear why they were fighting towards the end of the documentary. One said:

We don’t want to be at war, we want to live with others in peace

But in the first half of Kemp’s documentary, and even until the end, there was a distinct depoliticisation of Rojava’s clearly political battle against Daesh. Kurdish academic and activist Dilar Dirik has long railed against this type of coverage, especially when related to female fighters, saying:

Western media’s white-washing of the Kurdish women’s resistance sanitises a radical struggle in such a way as to suit the perceptions of a western audience. Rather than challenging the awkward fact that the movement [the PKK and their YPG/YPJ allies] that the vast majority of women fighting ISIL belong to is labelled as a terrorist organisation – by Turkey, the EU, and the US – they conveniently leave it out…

Appreciation for these women should not only praise their fight against ISIL, but it should also recognise their politics.

Turkey is in large part responsible for the absence of international recognition for Rojava, and for the unjustified designation of the PKK as a terrorist organisation. As NATO’s second biggest army and the most dominant military power in the region, Turkey’s hate-filled war against the PKK drives its opposition to the existence of an autonomous PKK-affiliated region on its border. And as Kemp pointed out, many people in Rojava actually:

fear what the Turks might do more than ISIS

And with the current descent into authoritarianism in Turkey, combined with the fact that around 100 Daesh recruits allegedly cross from Turkey every week into the part of Syria which Rojavan forces are currently seeking to liberate from jihadi control, that fear may be completely justified.

In this environment, it’s of the utmost importance that the world knows and cares more about Rojava and the PKK if it’s at all interested in peace and democracy in the Middle East. As Kemp argued in the conclusion of his documentary, they represent:

a genuine movement for democracy, equality and tolerance. They are a beacon of light in a sea of tyranny.

– See testimonies from the Daesh massacre of Yezîdîs in 2014 here and here.