Tony Blair may be about to stand trial for war crimes, but there's a massive catch - Canary 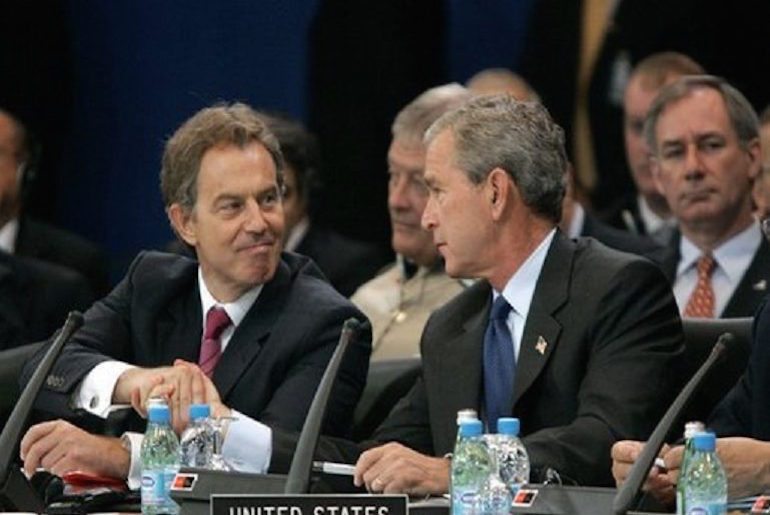 The families of British soldiers killed in the Iraq war have launched a crowdfunding appeal to fund their prosecution of Tony Blair and other state officials “who might have acted unlawfully or in excess of their powers”.  The appeal has attracted huge public support, raising over £100,000 in just a few days. But now the families have learned that, while they have to rely on voluntary public donations to fund their case, any court costs and damages incurred by Blair will be picked up by the taxpayer.

The fathers of two British soldiers killed in the second Iraq war have launched a crowdfunding appeal to fund a possible prosecution of Blair and other state officials involved in the decision to take Britain to war in Iraq. Roger Bacon and Reg Keys say:

We represent the Iraq War Families Campaign Group, campaigning for the families of the 179 servicemen and women killed in the conflict. We are seeking to bring to justice those responsible for the War and the deaths of our loved ones […] Our armed forces must never again be so callously sacrificed by political ambition and the irresponsibility and failings of Government and Whitehall. Those responsible should be held to account.

The appeal, which is backed by the families of around 30 dead soldiers, has raised more than £100,000 of its £150,000 target in just three days. Meeting the full target will fund the families’ legal team, McCue & Partners, to conduct “a full and forensic legal analysis of the [Chilcot] report” and bring them to the point of launching proceedings against Blair.

But now the families have learned that Blair’s legal costs and any damages awarded to the families will be covered by the taxpayer if and when the trial comes to court. The Cabinet Manual (pdf, p52), which sets out rules on the conduct and operation of government, says:

It is the practice for ministers to be indemnified by the Crown for any actions taken against them for things done or decisions made in the course of their ministerial duties. The indemnity will cover the cost of defending the proceedings, as well as any costs or damages awarded against the minister.

A footnote makes clear that former ministers are also included.

Roger Bacon, the father of Matthew Bacon, who was killed by a roadside bomb in Iraq in 2005, said:

It is sickening he is indemnified. You feel this in the pit of your stomach. We will just have to swallow it – as difficult as it is to swallow.

It is very very disappointing if Tony Blair is indemnified against any financial punishment. It is nauseous to think he will have the taxpayer fund him while we are trying to raise funds to sue him.

Earlier this month, the families had vowed to sue Blair, who has earned tens of millions of pounds since leaving Downing Street, for “every penny”. Mr Keys said they hoped to put the damages into a fund to help rebuild Iraq:

I would like to see Tony Blair in court and answering questions under oath for the actions he took. I don’t know how he has made his money but he has done it on the back of being prime minister. There should be recompense for the actions he took. Chilcot has found him wanting. The misfeasance case allows us to sue him for unlimited damages. I would like those damages to be out into a fund for the rebuilding of Iraq. It would go some small way to make recompense for what happened there.

But Blair, who is thought to have already benefited from taxpayer-funded legal advice ahead of the Chilcot report’s publication, will now escape with financial impunity.

The Chilcot report criticised the decision-making behind the Iraq war, and found that its legal basis was “far from satisfactory”. But it did not express “a view on whether military action was legal”; Chilcot said that question could only be resolved in court. But the International Criminal Court has ruled out an international trial of Blair, saying a “decision by the UK to go to war in Iraq falls outside the Court’s jurisdiction”.

And with the British state unlikely to prosecute the former PM, the bereaved families say it’s down to them to bring a civil case against Blair:

The only remaining option is to take legal action of our own. It’s down to us – and we hope you will help – to seek justice where there has been none. We want to fight on for the memory of our loved ones. We want to say that we as families are not powerless – we can stand up to those who behaved so unconscionably in sending them to war for no just cause or reason.

Meanwhile, MPs from across seven parties have brought a motion to declare Blair in contempt of parliament, due to be debated in September. Former Scottish first minister Alex Salmond, who recently hinted that Blair could also be hauled up in Scottish courts over the issue, and Labour leader Jeremy Corbyn have both backed the motion.

A spokesperson for the group said:

If we are to prevent such a catastrophe happening again it is essential that parliamentarians learn to hold the executive to critical examination in a way that parliament failed to do in 2003. Holding Blair to account will be an essential part of that process of parliamentary accountability. The case has been made by Chilcot and any parliament worth its salt is duty bound to take action.

So it seems likely that, one way or another, Blair will be held to account for dragging the UK into a devastating war in Iraq. It’s just that you and I will be paying for the lawyers to defend him.

Donate to the crowdfunding appeal seeking to hold those responsible for the war to account.

Support The Canary, so we can keep reporting on stories that matter.