Newly signed up Labour members may have a very nasty message waiting for them [IMAGE, TWEETS] - Canary 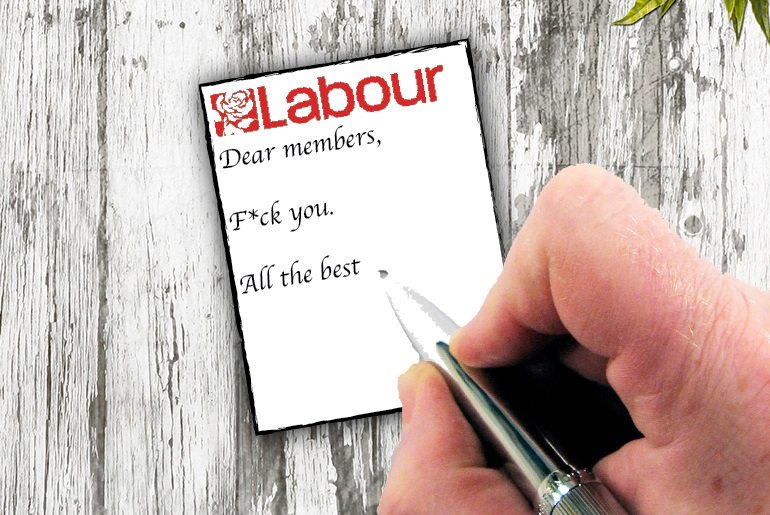 There have been a number of signs in recent days and weeks that the Labour party establishment looks down on members who it considers to be supporters of its leader, Jeremy Corbyn. And an email sent to The Canary from the Calder Valley constituency in West Yorkshire gives us yet more apparent proof of this attitude.

The email in question makes it clear that Labour members who joined after June 2015 are not eligible (i.e. welcome) at the party’s national conference in September. Considering that Corbyn has attracted hundreds of thousands of supporters and members to the party since the leadership race began in August 2015, this means that a vast number of Corbyn supporters are effectively barred from attending the conference.

While the eligibility requirements may well be a longstanding rule in the Labour party, they seem to send the wrong message out to new members. The constituency Labour parties (CLPs), says the Labour website, “can choose the members from your area to represent you at annual conference”. An extra note may be necessary here, to make it clear that the members sent to the conference must be of the party’s liking.

Here’s the email from the Calder Valley CLP: 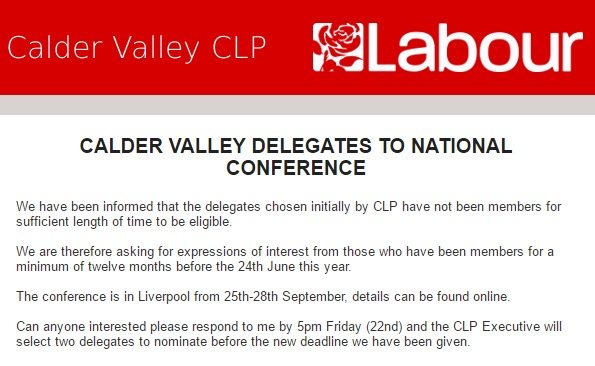 But this issue has not only come up in the Calder Valley CLP. One member (and Corbyn supporter) from Kent who appears to have been affected by this is Bridget Chapman, who wrote on Twitter:

@Scriptonite I'm one of the delegates affected. Have paid delegate fee of £116 + paid for hotel in advance (non refundable). Now told NO.

In recent weeks, the attempted Labour coup has seen anti-Corbyn MPs go against the democratic will of party members and supporters – who voted overwhelmingly for Corbyn to become leader in September 2015. The suspension of entire CLPs supportive of Corbyn, meanwhile, has also received much criticism. At the same time, the party has sought to cut new party members out of the upcoming leadership battle between Corbyn and Owen Smith, charge prospective supporters £25 for the right to vote, and purge potential voters by searching through their social media accounts for recently banned words.

Since becoming Labour leader, Corbyn has promised to “put the people back in power” and to consult members over policy-making. Maybe the concept of such bottom-up democracy sits uncomfortably with Labour MPs used to the Tony Blair years of top-down decision-making. Maybe that’s what this is really all about. And maybe that’s all the more reason for Corbyn supporters and new Labour members to stand up and ensure that their voices are heard.