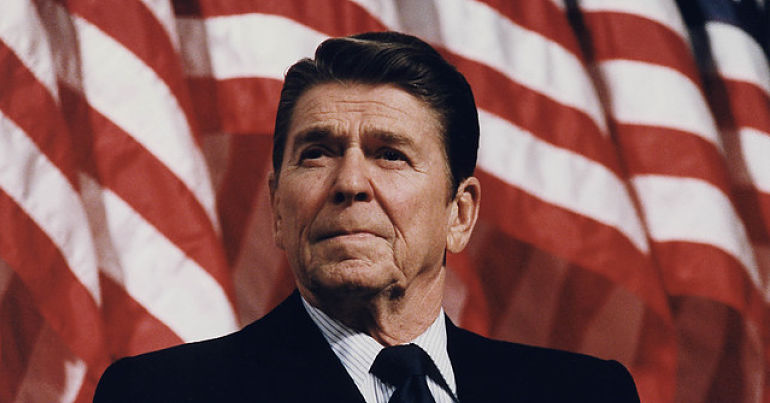 A declassified recording from the US National Archives shows Ronald Reagan refer to Black people as ‘monkeys’ in 1971.

Revealed by the Atlantic on 30 July, the racist remarks were made during a phone call with then-president Richard Nixon. Reagan, angered that African delegates at the United Nations had voted against US wishes, launched a racist tirade down the phone to the president.

Reagan said of the UN vote:

Last night, I tell you, to watch that thing on television as I did…

To see those, those monkeys from those African countries—damn them, they’re still uncomfortable wearing shoes!

At the time of the phone call, Reagan was a governor in California. During his campaign for governorship, he had declared:

If an individual wants to discriminate against Negroes or others in selling or renting his house, it is his right to do so.

Nixon was apparently not disturbed by his conversation with Reagan – he responded to his remarks with “a huge laugh”. In fact, the Atlantic reports that Reagan’s racism comforted Nixon, who harboured his own prejudices. Indeed, Nixon “believed in a hierarchy of races, with whites and Asians much higher up than people of African descent and Latinos”.

In a later phone call, Nixon would go on to call the African delegates “cannibals”.

Once elected president in 1980, Reagan would go on to enact racist policy in line with his racist remarks. During the 1980s, his government sought to defeat the left around the world. And its efforts contributed to the deaths of tens of thousands of civilians (at least) throughout the Global South.

In Afghanistan, for example, Reagan’s regime sponsored jihadi fighters to fight the USSR. Osama bin Laden would be one figure to benefit from the proxy conflict.

The Reagan administration also reaped disaster throughout Central America. As Jacobin reported, it:

showered the far-right military in El Salvador with economic and political support, and battled with a reluctant post-Vietnam Congress to do the same in Guatemala. Reagan also staunchly backed the right-wing contras at war with the new socialist government in Nicaragua.

Reagan said the ‘contras‘ were the “moral equal of our Founding Fathers”. But as Noam Chomsky wrote in 1992:

Reagan used them to launch a large-scale terrorist war against Nicaragua, combined with economic warfare that was even more lethal. We also intimidated other countries so they wouldn’t send aid either.

The International Court of Justice (ICJ) found in the 1980s that Reagan’s policy in Nicaragua had violated international law. But rather than pay reparations, the US withdrew from the ICJ’s compulsory jurisdiction.

Damning, but no surprise

The declassified phone call is appalling. But Reagan’s racism was also consistently embodied by his policy choices. So his words should come as a surprise to nobody.