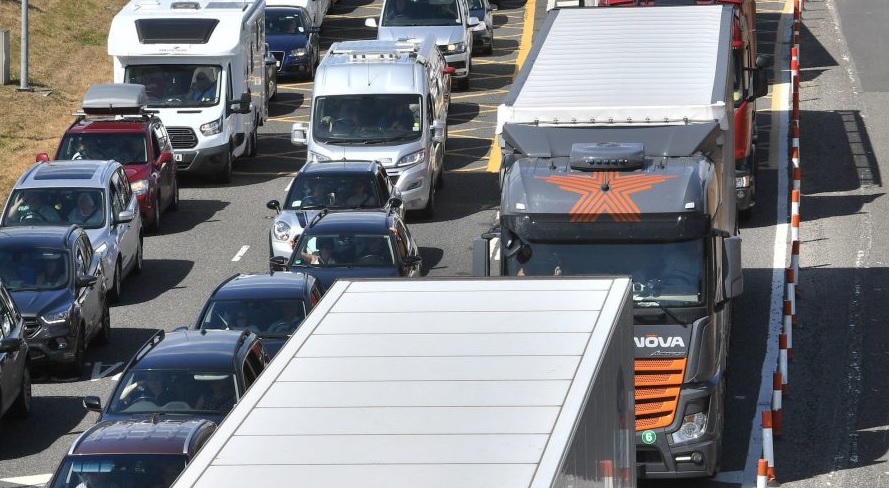 Lorry drivers and haulage firms face increased fines in the event of a no-deal Brexit, with Labour comparing new powers for traffic officers to a “neo-police state”.

According to Sky News, the Department for Transport has set out proposals for Highways England traffic officers to be given the power to demand and check drivers’ documentation in a consultation.

John Howarth, Labour MEP for the South East region, which covers Dover, said the Government is secretly seeking to give draconian powers to traffic officers.

He added: “I am alarmed by the reports of secret plans for unprecedented summary powers for traffic officers in Kent in the event of the UK crashing out of the EU without an agreement.

“This is an admission that Kent faces chaos and the introduction of neo-police state powers with a so-called ‘consultation’ carried out in secret and with ‘non-disclosure agreements’ is quite disgraceful.”

Mr Howarth said he is writing to the transport secretary Grant Shapps to call for full disclosure.

“Only then can we judge if such measures are proportionate or are simply part of the Government cranking up its no-deal bluff,” said Mr Howarth…..

“Nobody voted for this in 2016 and this Government has no mandate for no deal”.

Mr Shapps told Sky News the Government is taking “necessary steps” to make sure that goods carry on flowing.

“This is what people expect a responsible Government to do under the circumstances.

The consultation proposes legislation to support Operation Brock, the no-deal contingency plan to deal with disruption on the M20 leading to Dover.

Traffic officers would stop drivers some distance from Dover to check paperwork and they would be forced to comply and only those with the correct paperwork will be permitted to carry on to Dover, with those who fail to comply being fined up to £300.

Rod McKenzie, a spokesman for the Road Haulage Association, asked for clarity.

“The government appears to be trying to bring some discipline to what has been, up to now, a chaotic and confusing system in the event of a no-deal Brexit,” he said.

“We do believe that hauliers and everyone involved in the logistics business needs to be fully prepared for unfamiliar customs and borders paperwork, but they do need to be told urgently what is required from them and that has not yet happened.”