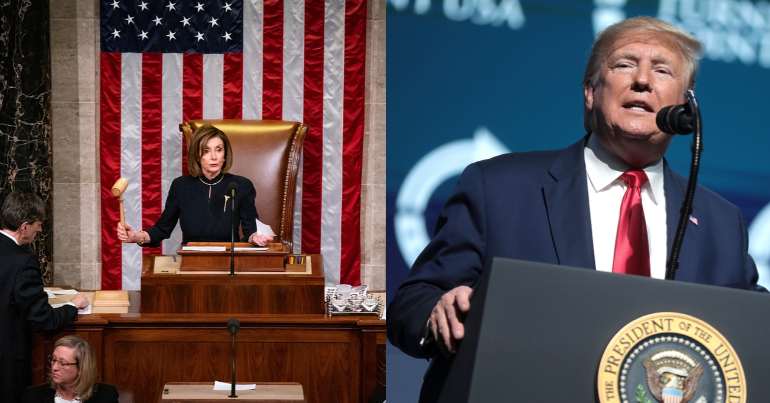 As Donald Trump’s impeachment trial begins in the US, it’s very tempting for progressives worldwide to cheer his apparent downfall. But we shouldn’t be so quick to start the jubilations. Because his conviction is not at all likely – let alone certain. And the whole episode may well embolden him by serving as a tool to rally his base.

There’s an even more important reason why this impeachment process is nothing to celebrate, though. Because it serves to singularise Trump’s presidency as some kind of break from an otherwise noble and untarnished record of US governance. But it’s nothing of the sort. Whether it be George W. Bush or Barack Obama, Ronald Reagan or Bill Clinton, Richard Nixon or John F. Kennedy, successive US administrations of both establishment parties have loyally upheld an imperialist world order that has unleashed unforgivable crimes and unmentionable human suffering for decades.

In December 2019, the US House of Representatives voted to impeach Trump, making him only the third president in the country’s 243-year history as an independent nation to be impeached. This month, his trial on charges of ‘abuse of power’ and ‘obstruction of congress’ began in the US Senate.

Given that Trump’s own Republican Party is in the majority in that chamber, however, there is little chance of him being convicted. The vote to impeach in the House of Representatives was almost completely on partisan lines – with a small handful of Democratic members joining all Republican members in voting against impeachment.

Until fairly recently, Democrats had been divided on whether to move forward on impeachment. Some took the view that since Trump is a dangerous, out-of-control demagogue (as he undoubtedly is), congress members have a duty to uphold the constitution by removing him for “high crimes and misdemeanors“. Others, however, felt that an impeachment trial would end up as a distraction. The reality is that the outcome could be even worse: it may well play right into Trump’s hands.

In his 2016 campaign for the presidency, he sold a carefully constructed narrative to the US public made up of two parts. First, that Washington had become corrupted by an out-of-touch elite that served special interests rather than the people – which is absolutely spot on. The second idea was that, since Trump was purportedly a “self-made” billionaire, he was not beholden to these interests and was therefore well-positioned to represent ordinary people – which, of course, is completely false (since as soon as he entered office he showed himself to be every bit as beholden to special interests as his predecessors). Now, he will surely paint himself as being victimized by the Washington establishment to help rally his base.

But there’s another reason why his impeachment might not be a good idea. Because the charges on which it’s based are minor infractions in the grand scheme of things. Whether it be his fawning over Israel‘s criminal far-right government, his pulling out of the Iran nuclear deal, or his disastrous meddling in Latin America, Trump’s presidency has indeed been a complete horror show. So the impeachment charges – alleging he used his influence to obtain information from the Ukrainian government in order to discredit political opponents – pales in comparison to these larger crimes.

Moreover, many of the Democratic members of congress – especially from the party’s establishment wing – have supported some of the Trump administration’s worst policies, from its recognition of Jerusalem as Israel’s capital to its orchestration of a coup attempt in Venezuela and its massive increase in military spending.

Above all, though, the impeachment process risks presenting Trump’s presidency as somehow uniquely evil. But in reality, it simply represents an unmasking of a decades-long pattern of behavior by the US government both internationally and towards its own people.

Whether it be war crimes in Indo-China, Reagan’s wars in Central America, or the so-called ‘War on Terror‘, the US has for decades been a rogue state that tramples over international law and causes untold human suffering across the globe. As Noam Chomsky once pointed out, if the Nuremberg standards that were applied to Nazi war criminals after the Second World War had been applied to the US, every single post-war president “would have been hanged”.