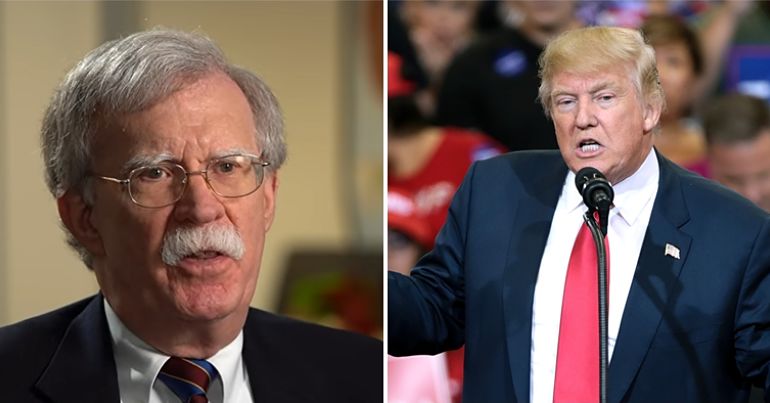 John Bolton’s book, titled The Room Where it Happened, claims to give a “comprehensive and substantial account of the Trump Administration”. It covers Bolton’s 17 months as Donald Trump’s national security adviser. In an interview about his book, Bolton says he doesn’t believe Trump is competent to hold office.

Meanwhile, ordinary members of the Democrat Party see this as an opportunity. Some believe they could even subpoena Bolton because of it. And if they get their way, Bolton will give evidence under oath in front of the US Congress about the allegations he makes in his book.

And while the prospect of electing a progressive candidate to the White House on 3 November this year is off the cards, Bolton’s revelations could damage Republicans in the longer term. Firstly it could guarantee Bolton’s wish that Trump is just a “one-term president”. Furthermore, and if Democrats get their way, it could tip the balance in their favour in the US Senate.

Trump’s unsuitability for office is obvious. But it’s revealing to hear it from a former high-level adviser. US Democrats want to capitalise on this and dig further into Bolton’s time with the Trump administration.

The Democrat strategy isn’t without risk though. Because reopening these issues so close to an election could affect moderate lawmakers. However, they believe it’s worth it as they feel voters will punish Republicans in November for defending Trump from these accusations.

Should Democrats then take control of the senate, this could give them the power to approve or reject presidential appointees to judicial positions. They could then begin to reverse the impact of the conservative appointees during Trump’s term, some of whom deny a woman’s right to choose.

The optimism generated by hearing a conservative Republican turning on one of their own is short-lived. Because Bolton doesn’t believe Trump is “philosophically a Conservative or a Republican” in any case. Bolton was Trump’s national security adviser until Trump forced Bolton’s resignation in September 2019.

In addition to Trump’s incompetence, Bolton’s problem with Trump appears to be his belief that Trump was too soft on China and was mainly interested in trade. Instead Bolton believed the focus should have been on dealing with the “threats of terrorism…in Afghanistan”.

But the ‘tell all’ book could indeed be a canny move by the former adviser. Because Bolton hopes to do a damage limitation exercise on Trump’s time in office by ensuring Republicans don’t lose control of the Senate in November. The Republican Party currently holds a slender 53 to 47 majority and Bolton feels Trump could “damage those chances.” But if Democrats get their way, it’s Bolton who could ‘damage those chances’.

Bolton failed to attack the entirety of Trump’s sorry record in office. The hawk-like Bolton didn’t condemn him for increasing bombing in Afghanistan. Nor for describing far-right protesters as “very fine people”. He attacked Trump’s lack of strategy and philosophy and described Trump’s approach to decision-making as “scattershot”. An accusation that may not surprise too many people.

Instead he praises Trump for pulling out of the Iran nuclear deal. This deal saw Iran reduce its uranium stockpile. The deal also meant damaging sanctions the EU, US and UN imposed on Iran were lifted. So pulling out of that deal meant certain sanctions were re-imposed on Iran. This in turn greatly hampered its efforts to fight coronavirus (Covid-19).

Bolton also praised pulling out of the Intermediate-Range Nuclear Forces (INF) treaty with Russia. The INF treaty ended the so-called arms race between the US and former USSR in the late 1980s.

While he praises Trump for increasing the defence budget, Bolton dismisses this as he believes Trump would reverse it, if re-elected for a second term, to “spend more on infrastructure and other things like that.”

Bolton believes his book could help distance him and the ‘philosophical and strategic conservatives’ from Trump’s tenure. This could subsequently help Republicans keep control of the senate and help to have the right people “in line for the 2024 presidential nomination”.

It’s probably too late to get behind a progressive candidate with a realistic chance of winning the 2020 election. But Trump and the neocons can be stopped.

Current opinion polls give Biden the lead, which is something to build on to stop a “neo-fascist gangster” returning to the White House. In that respect, Bolton shouldn’t be the only one focused on the long term.