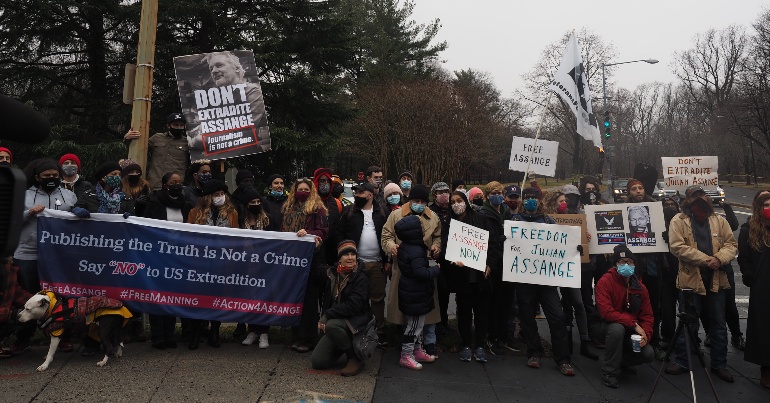 On Monday 4 January, a UK court ruled on the extradition of Julian Assange to the US. As The Canary reported, the judge fortunately refused the extradition request. And there’s more good news too. The day before, scores of protesters gathered outside the British embassy in Washington, DC to show their support for Assange.

Judge Vanessa Baraitser turned down the US extradition request from the US for Assange. Assange is wanted by US authorities for allegedly violating 17 counts of the Espionage Act relating to the publication of state secrets. These state secrets include war crimes in Iraq; the Obama administration’s role in the 2009 coup in Honduras, and the US’s deliberate withholding of information from NGOs about operations at its detention center at Guantanamo Bay. The Canary reported in 2018 that in November of that year, leaked documents showed Assange had formally been charged by a US district court.

Baraitser based her ruling on Assange’s risk of suicide as well as the US’s notorious prison conditions. Unfortunately, she failed to condemn the charges themselves, claiming that US prosecutors had somehow met the criteria for Assange to be extradited to stand trial.

“All we see here is pure hypocrisy”

On the eve of the trial, demonstrators gathered outside the British Embassy in Washington to protest the hearing and show their solidarity with Assange and his organization WikiLeaks. Representatives from the event’s organizer Action for Assange gave speeches in his support. The protesters also heard from Lee Camp of Redacted Tonight, Niko House of the MCSC Network, and Jackson Hinkle of the YouTube channel The Dive.

Journalist and long-time Assange supporter Max Blumenthal made an appearance toward the end of the demonstration and addressed the crowd. He said:

From all over the political spectrum… [people] are just coming together over some basic principles; principles that the British kingdom, the faded empire of the UK claims to embody – human rights and democracy. And all we see here is pure hypocrisy. …

What we have today with all of you out here – in not the nicest weather, in the middle of a pandemic, to support someone who is not an American citizen, whose name has been completely maligned in our media, who has been smeared, who has been the target of every kind of possible denigration and smear – this is incredible that we’ve mobilized this many people today, and this is just the beginning.

Julian Assange is in jail because of these words that he said, that ‘if wars can be started with lies, wars can be stopped with the truth’. And Julian Assange with his model of publishing, which with the courage of WikiLeaks, they brought us the truth that exposed the lies, not just behind the conventional wars that we’ve seen, but the hybrid wars – the vicious sanctions that are starving to death tens of thousands of Venezuelans, and Iranians, and Cubans, and are now targeting independent sovereign countries like Nicaragua, where WikiLeaks through the State Department cables showed how the US was paying opposition parties to try to distort, destroy the Sandinistas. We’ve learnt so much from WikiLeaks and it’s for that reason that Julian Assange is in jail… he’s in jail to make an example of him… so the rest of us don’t go and do what he does.

Andrew Smith of Action for Assange pointed out that the two US parties have been as bad as each other on this issue. He said:

We’ve had Obama’s administration prosecute more whistleblowers than anyone else previously in history combined. And Donald Trump broke that fuckin’ record! Donald Trump is prosecuting a journalist. It is his administration, at the advice of [former acting director of national intelligence] Rick Grinnell, that is bringing forth these charges that will end our public right to know. They hide it behind the veil of a right-wing leader, because they are the ones who people think will defend free speech. We cannot allow their propaganda to allow this to happen!

Smith also paid tribute to the many independent media outlets, including The Canary, who were present at the event.