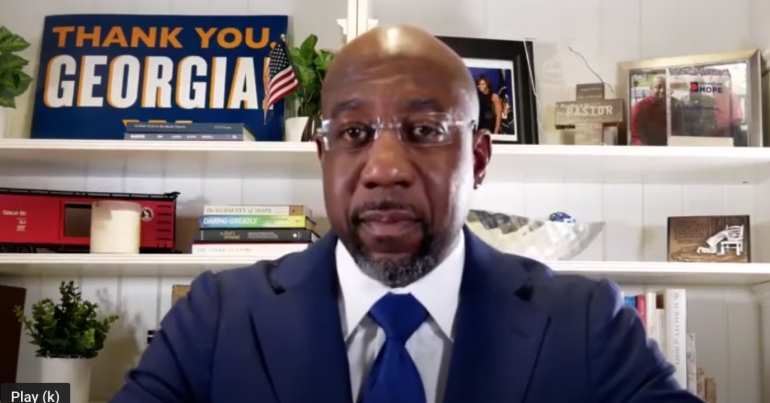 Georgia has announced the election of its two senators – reverend Raphael Warnock and Jon Ossoff, meaning the Democrats will take control of the Senate. As a result, the party will control Congress, the Senate and the presidency for the first time since 2011. Both Democratic candidates won against Georgia’s Republican incumbents, David Perdue and Kelly Loeffler. This is a historic moment, as senator-elect Warnock is set to be Georgia’s first Black senator and the 11th Black senator in US history.

In his address to supporters on election night, Warnock paid homage to his mother, saying:

The other day… the 82-year-old hands that used to pick somebody else’s cotton went to the polls and picked her youngest son to be a United States senator.

Warnock grew up with 11 siblings in the housing projects of Savannah, Georgia. He graduated from Morehouse College, a historically Black university, and is currently the pastor of Ebenezer Baptist Church where Dr Martin Luther King Jr. served.

The votes of Black people have been suppressed in this nation for a very long time. This is the dawning of a new day.

Warnock went on to say:

We were told that we couldn’t win this election. But tonight, we proved that with hope, hard work, and the people by our side, anything is possible.

Former candidate for Georgia state governor Stacy Abrams played a pivotal role in the Democratic wins in the historically Republican state with a long record of voter suppression. Her work leading Fair Fight Action and the New Georgia Project registered an estimated 800,000 new voters in the lead up to 2020 election. Celebrating the results, congresswoman Cori Bush tweeted:

Black women did this—but this isn't just "Black Girl Magic." This is the result of pure organizing, labor, and love that Black women have poured into GA.

Gratitude to every one of my sisters who willed the possibilities of this moment into existence. We see you and we love you.

Following the election, Warnock sent a message of hope, saying:

Warnock won the election in spite of Kelly Loeffler’s racist campaign against him.

On 2 January, Trump made a call to Georgia’s secretary of state, pressuring him to “find” votes to overturn the election. Riled up by the president’s unfounded accusations of election fraud, a violent mob of Trump supporters stormed the capitol in Washington D.C., while militia gathered outside capitol buildings in other states, including Georgia.

However, even white supremacists storming the capitol can’t diminish the importance of Warnock’s historic win. His message of compassion and unity offers respite in this dark moment in US history. The Democratic wins in Georgia shows that Black votes really do matter.