Sanders lays out democratic socialist alternative to Trump, railing against the ‘decimation’ of the US working class - Canary 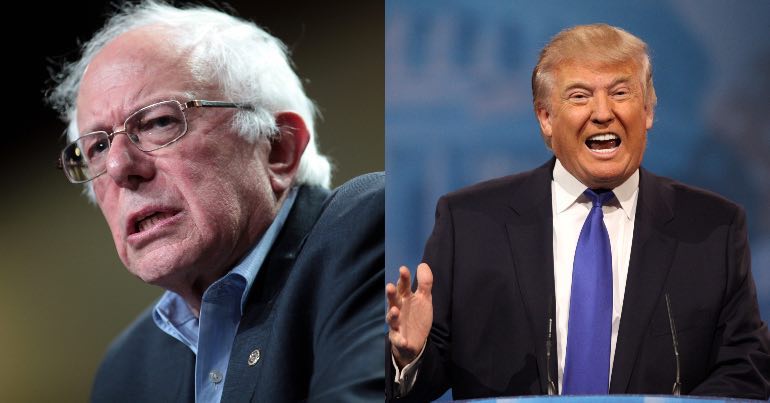 Presidential hopeful Bernie Sanders has slammed Donald Trump in an online question and answer session. He also detailed his vision of a democratic socialist alternative to Trump.

Sanders was answering questions on Reddit when he called out Trump and his policies since taking office. The senator, who has consistently railed against the level of inequality that exists in the US, went on to describe how he thinks corporations have “decimated” the US working class.

Sanders contended that the US working class “has been decimated” by corporations. He was also asked how he deals with the negative idea that many in the US have of socialism. He replied that “we explain” the term to people. And he said that:

we also explain the incredible attacks against working families that have taken place under unfettered capitalism.

He went on to reveal that:

Over the last 45 years despite huge increases in productivity and technology the average worker is not making a penny more in real dollars than they made 45 years ago.

At the same time, he argued, the richest 1% in US society has increased its wealth.

Considering that the bottom half of the population has become poorer during the same period, he explained what democratic socialism means to him:

“Trump is a fraud”

One Reddit user asked Sanders how he intends to “reach out” to people aged 50 and older. And he responded by stating that:

President Trump is a fraud and a liar.

He fleshed out his comment by saying that Trump had made promises during his presidential campaign that he’s since broken. Trump, he said, promised Americans that “he would not cut Medicare, Medicaid or Social Security”. But instead, Trump has actually:

The future of the US

Sanders said he believes his vision “is not utopian”. Instead, he argued that the achievements of democratic socialism exist in other countries. With this in mind, he maintained that US citizens need to “demand a government which works for all of us”. And, he asserted, “that is what my campaign is all about”.