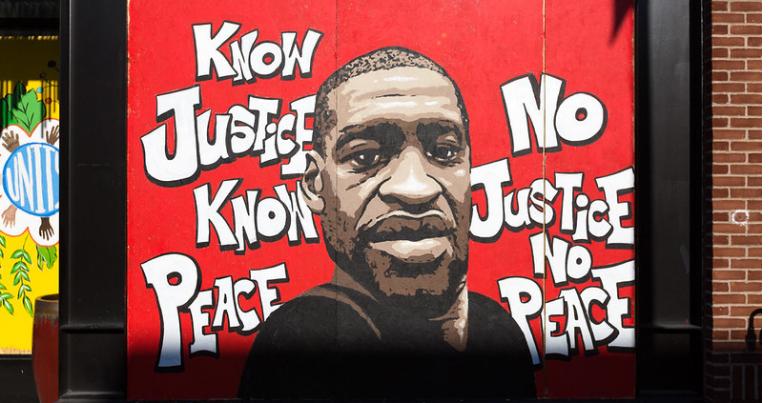 The trial for Derek Chauvin, the police officer accused of killing George Floyd, began on 29 March.

Prosecutors say Chauvin knelt on Floyd’s neck for about nine minutes in an incident that led to protests calling for justice around the world. A medical examiner later classified Floyd’s death as a homicide.

Chauvin is facing several charges, including second-degree murder. He has pleaded not guilty.

Floyd’s family have called for justice after holding a vigil in Minneapolis before the trial. One of his brothers, Philonise Floyd, said:

I have a big hole right now in my heart. It can’t be patched up… I need justice for George. We need a conviction.

Opening statements for the trial were heard yesterday. It is expected to last for about a month. In order to get a successful conviction, the prosecution must prove that Chauvin kneeling on Floyd’s neck was a “substantial causal factor” in his death.

Potential jurors began being questioned on 9 March, with selection being completed on 23 March. There are 15 jurors, four of whom are Black, two of whom are mixed race, and nine white. One is expected to be dismissed and another two used as ‘alternate’ jurors.

Chauvin’s defence team is expected to try and draw focus to police procedures, as well as Floyd having taken drugs and underlying health conditions as contributors to his death.

the jury will have to overcome the suggestion that he was just trying to do his job well. Most jurors don’t want to believe officers go to work and think ‘I’m going to kill someone today.’

Around 1000 fatal police shootings are reported every year in the US. Since 2005, just 126 police officers have been arrested for manslaughter or murder by shooting. Only 44 have been convicted.

However, a criminology professor said the video evidence of the incident might serve the prosecution well, as a police officer has been convicted in the past for a shooting after the prosecution proved a reasonable person would not have acted in the same way.

If I’m a prosecutor, I’m holding my stopwatch up for 8 minutes and 47 seconds and showing the jury how long that is.

The video of Chauvin kneeling on George Floyd’s neck surfaced in May 2020. In the video, Floyd can be heard saying “I can’t breathe”, as the officer continues to kneel on his neck. Bystanders were also shouting at Chauvin to get off Floyd’s neck.

After about nine minutes, officers carried Floyd away. He was pronounced dead an hour later.

His death immediately led to large-scale protests around the US and worldwide. In July 2020, the New York Times estimated 15-26 million people in the US had taken part in protests.

The world is waiting to see if the US will be courageous enough to stand up to a system that has a history of violating the rights of African Americans and, rather than protecting those lives, has actually destroyed them.