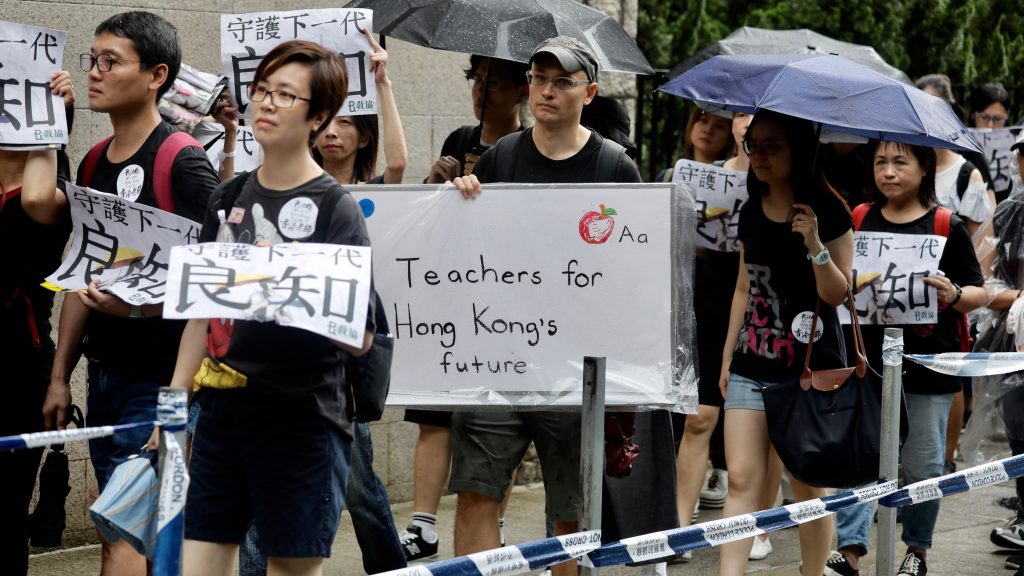 School teachers in Hong Kong are marching to the official residence of the city leader as another weekend of protests got under way.

An overflow crowd rallied at a public square in the financial district before setting off for Government House, carrying signs that read “Protect the next generation” and umbrellas to ward off intermittent downpours.

Teachers say they want to show their support for the protesters, many of whom are students.

They said the government should answer the protesters’ demands and stop using what they called police violence to disperse demonstrators who take over streets and besiege and deface government buildings.

“We are here due to continuous violence by the government and police,” said a secondary school teacher, who gave only his last name, Ko.

“We feel we have the right to protect our students.”

Hong Kong’s protests, nearing the end of their 10th week, show no sign of relenting.

Both a march on the Kowloon side of Victoria Harbour and a counter-rally backing the government were planned for later on Saturday.

A rally in Victoria Park has been called for Sunday by a pro-democracy group that has organised three massive marches through central Hong Kong since June.

The movement’s demands include the resignation of the city leader, Carrie Lam, democratic elections and an independent investigation into police use of force.

China’s paramilitary People’s Armed Police have been holding drills this week across the border in Shenzhen, fuelling speculation they could be sent in to suppress the protests.

Officers could be seen drilling inside a sports stadium on Saturday, and dozens of army-green trucks and other vehicles are parked in and outside the facility.

The Hong Kong police, however, have said they are capable of handling the protests.

“I can tell you we’re confident the police have the capability to maintain law and order,” Yeung Man-pun, commander of the Kowloon City district, said when asked about the possibility of a deployment of mainland security forces.