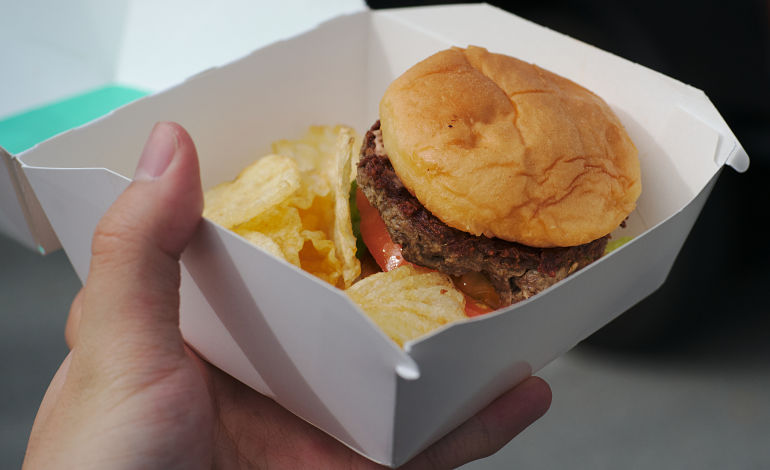 The US company Impossible Foods has created a ‘beef’ burger made entirely out of plants. It announced on Wednesday that it plans to open a factory the size of a city block to make 1 million pounds of its plant-based burgers every month. Currently, the Impossible Burger is only available in eight restaurants in the US. But it hopes to introduce it to 1,000 establishments by the end of the year. As well as introduce it to supermarkets and international markets when the facility is running at full capacity.

Both vegans and meat-eaters say the Impossible Burger tastes like the real thing. And its environmental benefits over beef are encouraging. Plant-based meat could very well be the answer to the sustainability issues posed by animal agriculture.

When given the burger to taste, without being told it’s plant-based, meat-eaters think it’s real meat. Other meat-eaters couldn’t really tell the difference, and say they would choose the Impossible Burger over a beef burger because it’s more eco-friendly.

The people at Impossible Foods spent five years studying what makes a beef burger unique – the sights, sounds, aromas, textures and flavours – and used exclusively plant-based ingredients to recreate everything.

The burger is made from wheat, coconut oil and potatoes. But what makes it different from other veggie burgers is the ingredient heme. It’s a building block of life found in plants. But it’s abundant in meat. The company discovered that heme is what makes meat sizzle, bleed and taste ‘meaty’.

Another contender is the Beyond Burger from Beyond Meat (who also produce plant-based chicken). Instead of heme, the company uses beets to make the burger red and ‘bleed’. Beyond Meat point out that meat’s core ingredients – amino acids, lipids, trace elements, carbs and minerals – don’t just belong to animals, but plants as well. And its been working for seven years to figure out how to make a beef burger using only plants.

Rather than being marketed at vegetarians and vegans, Impossible Foods, Beyond Meat and other similar companies are trying to attract meat-eaters to their products.

Compared to the cow-based alternative, the Impossible Burger claims to use 95% less land, 74% less water, and create 87% less greenhouse gas. And Brown is very clear about his passion for sustainability. He said:

The way that we’re producing meat now is incredibly destructive. Our whole mission is to reduce the environmental impact of the food system.

The company is highly ambitious. Brown added that:

You can think of this [facility] as the birthplace of a whole new industry that’s going to transform the food system.

But this kind of transformation will only happen if the general population decides to give up meat for these alternatives.

It is likely that further improvements will need to be made to plant-based meat, so that it becomes truly indistinguishable from the real thing. While many vegans and meat-eaters say some versions of plant-based meat are identical to the real thing, others feel there are small (but recognisable) differences in texture, taste and appearance.

The major thing that puts meat-eaters off these kinds of burgers is the price. They’re not hugely expensive (about £4.80 for two Beyond Burger patties). But this is still more expensive than the cheapest beef patties. On the other hand, if you factored in the environmental and health costs of cheap, processed meat, it might not seem like such a bargain after all.

More innovation and higher demand may bring down costs. So would subsidising plant crops. (Currently the US government massively subsidises the meat, dairy and egg industries.) If plant-based meat becomes affordable, then there won’t really be any good reason to turn it down.