A psychologist tried to take on the animal rights movement. But his argument makes no sense. [OPINION] - The Canary 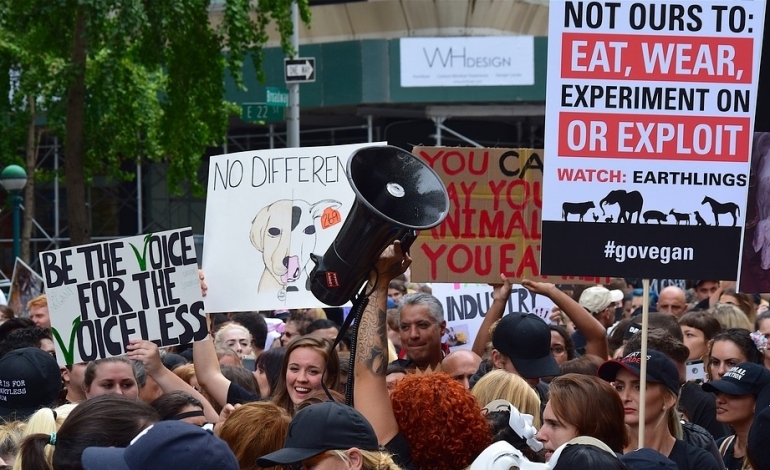 Jordan Peterson is a psychology professor at the University of Toronto. He’s also a controversial figure in Canada due to his opinions on political and social issues – often clashing with the left and the LGBT community. He’s a critic of Bill C-16, which Canada’s Senate has passed without amendment. The bill intends to prevent discrimination against transgender people. Yet Peterson claims the law would strangle free speech by criminalising people who refused to use someone’s preferred gender pronouns. He has also criticised the notion of animal rights. Peterson took to Twitter to voice his opinion on the subject:

Animals don't have rights. Rights are, by definition, reciprocal. People have responsibilities (to animals, as well). Terminology matters. https://t.co/6dtdQ1FGzf

But while Peterson may think that this simple logic discredits the animal rights movement, it doesn’t. There are many problems with his argument.

How you define rights matters

Peterson says that ‘terminology matters’. And it does. If you’re defining rights based on reciprocity, then perhaps animals don’t have rights. After all, if we give animals rights, what do we get in return?

But why should we define rights based on a mutual exchange? This may be Peterson’s definition of rights, but it’s not the only one; and certainly not the most logical one. If you say rights are based on reciprocity, then some might suggest this would exclude infants and certain people who are cognitively impaired.

Someone who opposes animal rights might argue that (most) infants will grow up to provide something to their parents and society. So babies deserve rights for their potential to contribute something of value in the future. But what if a baby had a terminal illness? Should the child lose its basic rights because of its unfortunate fate? And ultimately, what constitutes a ‘mutual exchange’? What does it mean to ‘provide something’?

An animal rights advocate may argue that animals, such as pets, can offer benefits to humans – such as companionship. In fact, by giving animals certain basic rights, we may benefit to the extent that this helps us to become more compassionate and understanding of the lives of animals.

Rights based on interests

It would be more consistent and less problematic to define rights based on interests. In this way, we can afford animals those rights that they have an interest in possessing. People deserve a right to a fair wage, equal opportunities, the vote, and free speech because they have an interest in having these things, whereas animals don’t. These freedoms aren’t relevant to a dog.

But animals do have an interest in their life, in living out a natural existence and being free from pain, suffering and exploitation. These may be basic interests, but this doesn’t mean animals, therefore, can’t have rights. It just means they deserve some basic rights. I’d be interested to know how Peterson would respond to this counterargument. So far, he hasn’t replied to my comments or to anyone else’s.