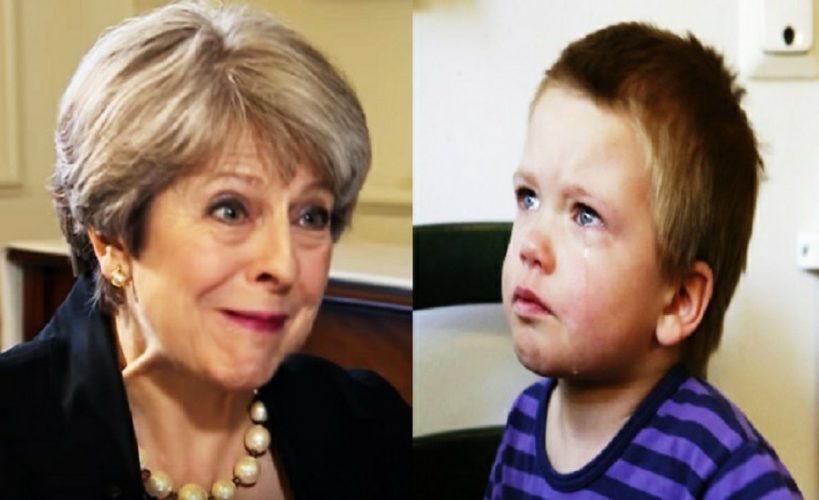 Shadow Education Secretary Angela Rayner says the education system is in “chaos” and “crisis”. And the situation is now so bad that volunteers are having to carry out renovation work on schools. But the government has announced this like it’s a good thing.

When it all falls down

In August, the government agency Highways England organised a “community day” for St Thomas More primary school in Kettering, Northamptonshire. Volunteers from companies that do work on the East Midlands road network renovated school facilities and grounds. This was all paid for by government contractors like Amey and Kier:

As the government announced on Tuesday 14 November, the school:

received a much-needed facelift after 80 employees from 12 different organisations provided materials to carry out the work over a two-week period… communal areas were cleaned, walls and woodwork painted and 275 old coat hooks replaced with brightly coloured, matching ones. New plastic sheeting was also installed around busy places near banisters and the canteen, so they can be wiped clean more easily.

Benches were given a new lease of life while planters were built out of fence posts that create a welcoming entrance to the building. The playground has had new long-lasting rubber surface laid to ensure that pupils are able to play in a safe environment.

But the reality of the situation is different. This volunteering merely replaces work that the government should be paying for itself. And as The Canary previously reported, government cuts to education budgets have led the Institute for Fiscal Studies (IFS) to warn that schools in England are facing real terms (that is, money adjusted for inflation) reductions of 6.5% to spending per pupil between 2015/16 and 2019/20.

The IFS noted that:

But schools having to use a begging bowl to replace lost funding is, sadly, not unusual.

A dystopia in our schools

As BBC News reported, a survey by Parent Teacher Association UK found a third of parents now give money to schools. Some of it goes specifically to “budget black holes”. And as Michelle Doyle Wildman wrote for TES on 9 November:

My youngest son has just started secondary school. On his first day, I was delighted to see that the school had emailed me with what I hoped was a message of reassurance that the new recruits were settling in.

Instead, what I got was a request to donate to the school fund by monthly direct debit. And indeed the vast majority of communications since then have involved money in some way.

You may have read in TES recently about our research into parents’ attitudes towards the cost of sending their child to a state school. Parents told us that costs are going up and becoming an increasing cause for concern.

It is paradoxical that parents who send their children to a ‘state’ school which is publicly funded, therefore free, are worrying about the cost. But in the increasingly dystopian world of Tory Britain, parents paying for schools and volunteers doing essential maintenance on them is now a reality.