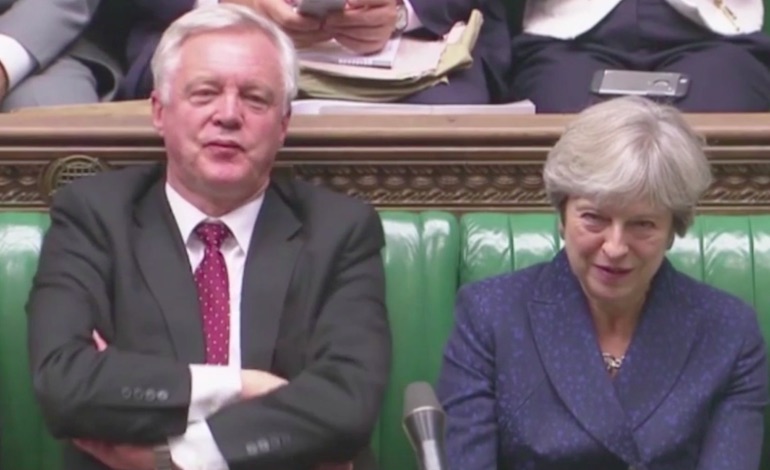 The Conservative government’s latest announcement to put the final Brexit bill before parliament has provoked a backlash from Conservative MPs. Brexit Secretary David Davis appears to have made the concession to ward off a brewing Tory revolt. But it hasn’t been enough.

Any agreement on the UK’s withdrawal from the European Union and transitional period will now go before a vote in both Houses of Westminster. But if MPs and peers vote no, Davis has insisted that the UK will leave regardless, which calls into question the relevance of the vote.

But pointless if we have enshrined a drop dead date in the Bill, & get a deal at 11th hour! There’d be no time!

And also offers no safeguard if no deal is reached. Unacceptable.

Conservative MP Antoinette Sandbach branded Davis’ announcement as “meaningless if, for any reason, the timetable slips beyond March 2019”.

"It's blindingly obvious… that the final agreement with the EU is not going to have been agreed by 2019"
Shadow Brexit Secretary @Keir_Starmer has written to Theresa May questioning the government's #EU Withdrawal Bill pic.twitter.com/2KrhhuBkZP

I have written to PM. The only way to face down her Brexit extremists, who will drive us to 'no deal', is to accept Labour's amendments to the Withdrawal Bill. Act now in the national interest; not party interest. https://t.co/dPMAMiqL3B

David Davis' announcement just now that there will be an Act of Parliament to approve a final EU deal is totally insufficient: he gave no guarantee of a meaningful vote before 29 March 2019 and this doesn't cover the event of there being no deal /1

And one Twitter user shared this nine month old tweet to hint at who the Conservative rebel MPs are:

The seven Conservative rebels who voted in favour of rejected #brexitbill amendment that parliament must agree the #Brexit deal. pic.twitter.com/tmZvtjsMxW

This apparent concession from the Conservative government has done little more than create confusion. Brexit Secretary Davis and Prime Minister Theresa May say that parliament will decide with a ‘take it or leave it’ vote. But they also say that if parliament doesn’t vote in favour of the government’s wishes, they will move forward with their Brexit plans anyway. With the Conservatives at war over Brexit as the 2019 deadline edges closer, the future of the country is up in the air. And given its prolific u-turn record since the 2017 general election, the government will continue to keep the country on tenterhooks.