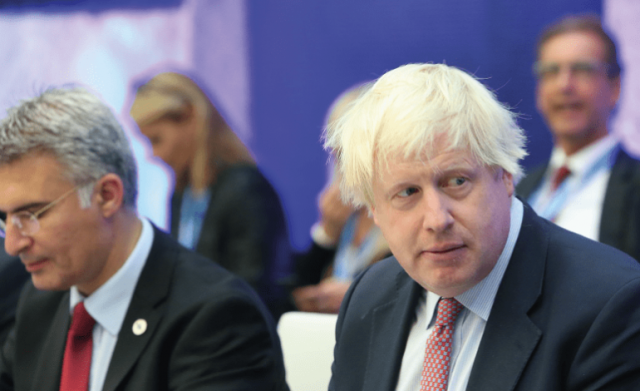 In her Lord Mayor’s banquet speech, Theresa May accused Russia of meddling in “our democracies”. But just over a week earlier, Foreign Secretary Boris Johnson essentially said the opposite. So who’s telling the truth? The Prime Minister, or the man who was photographed having lunch with a ‘professor’ named by an FBI informer as a go-between to Russia?

At the banquet, May said:

I have a very simple message for Russia. We know what you are doing. And you will not succeed. Because you underestimate the resilience of our democracies, the enduring attraction of free and open societies, and the commitment of Western nations to the alliances that bind us. The UK will do what is necessary to protect ourselves, and work with our allies to do likewise.

Labour MP Ben Bradshaw, meanwhile, has requested a judge-led inquiry into the possibility that Moscow influenced the result of the Brexit referendum.

Asked recently if Russia had been interfering in voting, meanwhile, Boris Johnson replied: “I haven’t seen any [evidence], not a sausage… As far as I know they have played no role.”

This was specifically in response to a question about the investigation by the Electoral Commission into the financial arrangements of Leave.eu funder Arron Banks. Banks himself has said that: “Allegations of Brexit being funded by the Russians… are complete bollocks from beginning to end.”

But that’s only half the story. Because in October, Johnson was photographed at a Conservative Party event standing next to Joseph Mifsud – a Maltese academic, ‘London professor’, and director of the now defunct London Academy of Diplomacy.

Questions, anyone??
Photo surfaces of Boris Johnson with Joseph Mifsud.
The "London professor" named in FBI docs who's now gone to ground..
..and who Boris specifically denied meeting.
(H/t to @gavinsblog for top digging.) pic.twitter.com/jJwRsLfs9k

According to court documents, Mifsud was the main contact between Papadopoulos and the Kremlin.

The Foreign Office told crowdfunded journalism site Byline that Johnson had never “knowingly met this person [Mifsud], planned to meet this person, or indeed ever heard of this person”.

The photo of Johnson and Mifsud was published by a British-Indian associate of Mifsud, Prasenjit Kumar, who is pictured here with Theresa May:

Theresa May accuses Russia of interfering in elections…

The 2016 EU referendum vote may have been skewed by the deployment of thousands of Twitter bots. Vote Leave, fronted by Johnson, paid millions of pounds to AggregateIQ, a firm that specialises in “audience persuasion”. The Guardian also claims that a Russian spy targeted former Vote Leave head Matthew Elliott via the Conservative Friends of Russia.

Clearly, there are many unanswered questions. But May and Johnson definitely appear to be divided over alleged Russia meddling. And they can’t both be right.