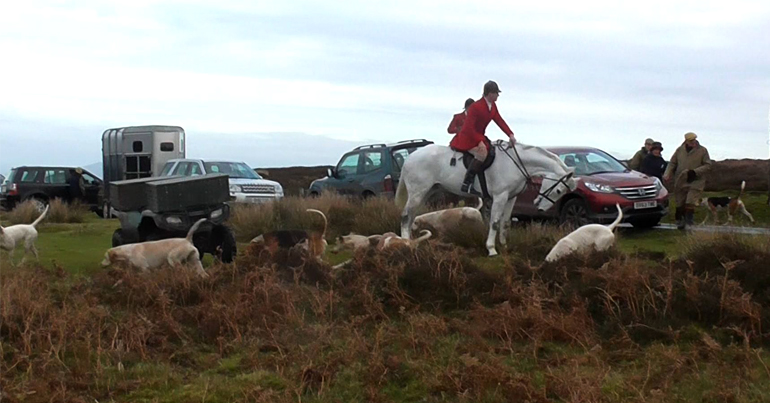 UPDATE: This article was updated at 3.40pm on 4 January to reflect some new information

The National Trust announced on 20 December that it had cancelled a licence allowing the South Shropshire Hunt to ‘trail hunt’ on its land. This came after images of the hunt’s hounds chasing a fox were published by National Dis-Trust. But it’s just the latest in a string of revoked hunting licences.

Caught in the act

The National Trust had licensed the South Shropshire Hunt to use its Long Mynd estate on 14 January. But the charity cancelled this after the hunt visited the site on 10 December 2018. National Dis-Trust, along with Shropshire Monitors, caught the South Shropshire Hunt’s hounds chasing a fox on that day. The groups also observed a terrier man accompanying the hunt on Long Mynd. The charity doesn’t permit either of these acts, although the hunt claims that these allegations aren’t true.

National Dis-Trust told The Canary the two groups presented their evidence to Long Mynd staff on 11 December. This was then passed to the National Trust’s trail management team. The League Against Cruel Sports said it also wrote to Long Mynd’s general manager, calling for a “block [on] those seeking to hunt wildlife on its land”. As a result the National Trust cancelled the South Shropshire Hunt’s remaining Long Mynd licence. Another hunt, the United Pack, still has a license to hunt on the estate on 8 and 29 January.

National Dis-Trust spoke to The Canary about this development. It said:

The cancellation of the so-called ‘trail hunt’ licence for the South Shropshire Hunt at Long Mynd based on evidence from ourselves & Shropshire Monitors shows that the reality of the National Trust’s policy is a far cry from their empty claims about licensing responsible hunts. Every other hunt currently licensed for National Trust land will be acting in the same way; some employ huntsmen convicted for illegally hunting, others have recently been filmed killing foxes on National Trust land. We continue to call on the National Trust to abandon this embarrassing charade and join the rest of us in the modern world.

Two other hunts have also seen their chance to use National Trust land fall apart. In December 2018, the Surrey Union Hunt reportedly chose to give up two dates at Polesden Lacey. This came just days after Guildford Hunt Saboteurs caught the hunt chasing and killing a fox near the estate. On 6 December 2018, SurreyLive quoted a National Trust spokesperson as saying:

The Surrey Union Hunt is not intending to use their licensed dates of December 8 [2018] and January 2 at Polesden Lacey… We are aware of reports that a fox was killed over the weekend. This is now a police matter and as such we cannot comment any further.

And on 18 December, the National Trust issued a statement about the Trinity Foot and South Herts Beagles. The hunt had been licensed at Ashridge Estate on three dates between November 2018 and January 2019. This decision came after a National Dis-Trust and Hertfordshire Hunt Saboteurs called for the charity to stop licensing the hunt.

But in its statement the National Trust said there “there is no suggestion they [the hunt] have done anything wrong”. The charity said it cancelled the licence because its deer management activities in the area were “not compatible” with those of the beagle pack. The statement also said that it “will not be inviting applications to trail hunt at Ashridge in future.”

The BBC reported on 3 January that police are investigating the Portman Hunt after a fox was killed on 2 January. A video by North Dorset Hunt Saboteurs shows graphic images of a disembowelled fox. The incident happened 11 miles from Kingston Lacey, a National Trust estate that licensed the Portman Hunt for the 6, 20 and 26 March. As a result, National Dis-Trust and the League are calling for these licenses to be revoked.

A long-running campaign to get hunts off National Trust land appeared to hit a brick wall in 2017. A motion at the charity’s 2017 AGM to ban trail hunting failed by a narrow margin. But the campaign continued on a number of fronts and has seen quiet success. Not only has the number of licensed hunts dropped (from 67 in the 2016/17 season to just 25 in the 2018/19 season), but now even those are beginning to dwindle. And this seems to be down to the hunts’ own reckless and arrogant behaviour.