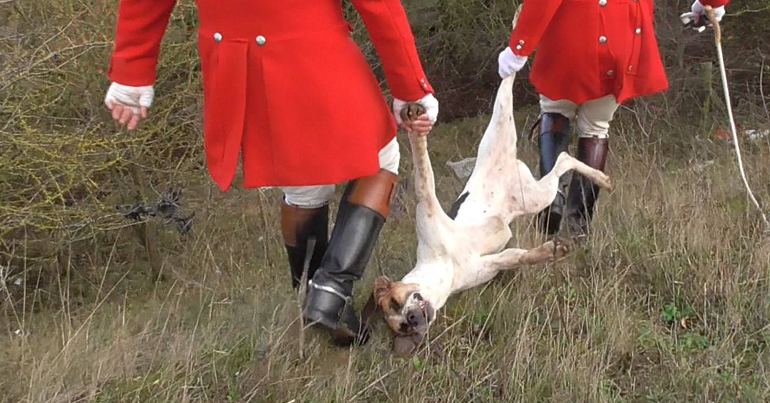 A hound belonging to the Fitzwilliam Hunt was killed on a busy A road on 8 December. A public statement by the hunt said it happened while “pursuing legal activities”. But hunt saboteurs present claimed otherwise.

Hit by a car

Whilst near Thrapston, Northamptonshire, a hound from the Fitzwilliam Hunt was hit by a car on the A14. Images from North Cambs Hunt Sabs show a hound dead on a road as well as a car with its airbag out.

A statement by the saboteur group said the incident happened just after midday:

A sab who arrived on the scene… slowed the traffic on the eastbound carriageway. One hound ran across all four lanes to the west bound carriageway, before turning around back to the huntsman. The poor young hound was struck by two vehicles and was catapulted along the road.

The hound was killed outright, the car driver was not injured and we thank her for her sympathy and understanding after this most unfortunate accident.

North Cambs Hunt Sabs claimed the hound was killed whilst illegally chasing a fox along the edge of the A14. But a spokesperson for the Fitzwilliam Hunt denied that, saying the hunt was “pursuing legal activities”. The hunt also claimed that a saboteur tried pulling one hunt staff from his horse. However, the saboteurs dismissed this as untrue, saying the hunt was trying to “deflect attention” from the hound getting killed.

Cambridgeshire Police said it was aware of the situation but hadn’t yet received any calls or complaints about it.

This incident raises an important question. If the hunt was pursuing legal activities as claimed, such as trail hunting or hound exercise, what brought them so close to a busy highway?

Wildlife suffers at the hands of hunts week in and week out, but it’s not just foxes, hares, and deer that are victim to hunts’ callous attitude. This dead hound is yet another reminder of the ‘other victims’ of hunting.