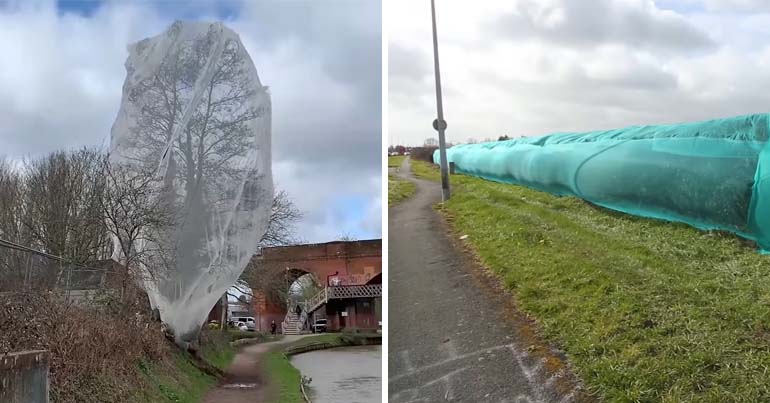 ‘Netting’ has infuriated people across the country because of its threat to wildlife. So people are fighting back with grassroots action against the “sickening practice”.

Builders and developers secure nets over hedges or trees in areas where building work is expected to take place. The RSPB told BBC News that:

developers do this to make it easier for them to remove greenery when the time comes, as although it’s an offence to destroy an active nest, there are no laws to prevent the installation of nets to stop birds nesting in the first place.

In other words, netting is a workaround that allows developers to gain planning permission more easily.

Reports of trapped and dead birds under netting have stoked outrage at the practice, though. On 18 March, the Woodland Trust called it a “sickening practice” that shows an “alarming disregard for the welfare of wildlife”. And on 25 March, the RSPB said it couldn’t “stand by and let the current practices spread unchallenged”.

While conservation groups have called the practice out, people across the country are taking action. A Google pin map called “Nests Not Netting” allows people to share places they’ve found nets. At the time of writing, the map showed more than 100 pins for active sites across Britain.

In addition to trees and hedges, the map also includes swallow nets. These prevent nesting of migratory swallows in areas such as roofs. It gained widespread awareness when an ultimately successful campaign to remove swallow nets from a Tesco store in Norwich hit the headlines. Details of removed nets are also included on the map.

The campaign against the practice has developed a number of different approaches. Nearly 200,000 people have signed a petition on the Government website to “make ‘netting’… a criminal offence”, for example. A group of people tore nets down from trees in Darlington after they found a dead dunnock. And an academy in Ely agreed to remove nets from trees after people wrote to the school with their concerns.

Netting is a very visual example of the cruelty inflicted on wildlife. And although new nets continue to pop up, it’s clear people will continue taking action against this horrific practice.