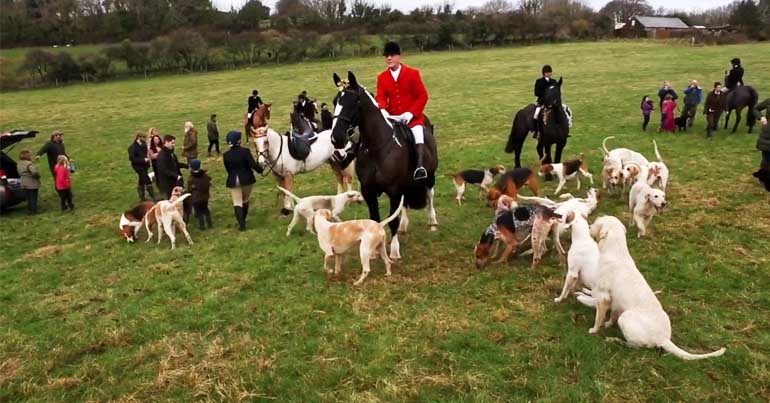 A woman from the Isle of Wight said she was attacked by a dog linked to a local hunt. And when she reported it to the police, her husband claimed the police told them not to go to the press about it.

Local paper the Isle of Wight County Press reported on 26 July that a woman was “savagely attacked” by a hunt terrier. The victim chose to remain anonymous. But she said that the terrier attacked her when she came across the Isle of Wight Hunt exercising its hounds. She also claimed several of the hounds attacked her own dog.

A terrier with the group bit her several times on her thigh, and several of the hounds turned on her pet sprocker spaniel, causing an injury that needed stitches and fluid drainage.

The Isle of Wight Hunt said it “apologised unreservedly” for the attack.

However, the woman approached the local paper because she believed police hadn’t taken adequate action. She said that four weeks had passed since the incident. She didn’t believe the police had taken any action. The woman was also worried that the terrier posed “a danger to the public”.

The woman’s husband went on to claim that police officers told the couple “not to go to the press”. The husband also alleged the police had implied that publicising the incident could lead to the dog’s death:

The police told us not to go to the press, and asked us how we would feel if the terrier had to be put down.

He also criticised the Isle of Wight Hunt for displacing other members of the community:

We have heard of people who no longer walk in the area because of the hunt, and one running group has changed its route because of it. This is a loss of amenity to the community if people feel they can no longer use the local area.

The County Press said police were “unable to comment” on the husband’s claim. The Canary contacted Hampshire Police to confirm if its officers made the statement and whether it would be routine advice to imply that press coverage increases the chances of a dog being put down. A spokesperson said:

The darkest side of hunting

Terriers aren’t hunting hounds. They have traditionally been used after a fox has ‘gone to ground’, or tried to escape the hounds, in a badger sett or fox hole. A terrierman puts the dog into the hole to track the fox. Once it’s located, the terrierman will ‘dig out’ the fox and kill it – if the terrier hasn’t already killed the fox.

Terrier work is one of the most gruesome aspects of hunting. The League Against Cruel Sports says it leads to “some of the worst cruelty associated with hunting”. Terriermen are reportedly also often the source of violence on hunting days, with the Hunt Saboteurs Association describing them as “rural hooligans”. The National Trust has also banned terriermen, saying they have “no place” in hunts that abide by the law.