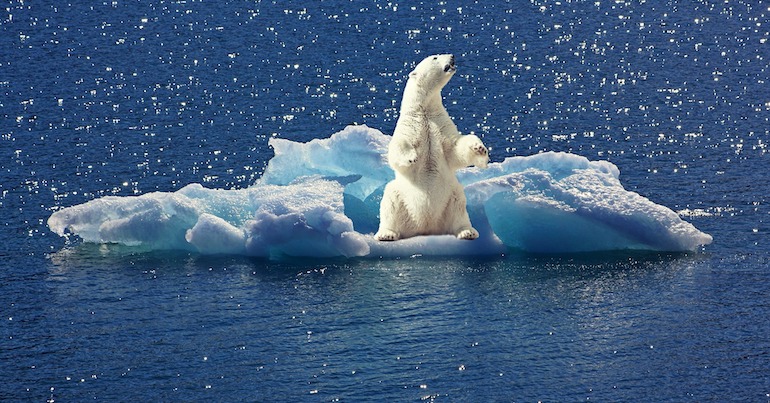 Scientists have discovered that, for the first time ever recorded, sea ice has vanished entirely off the Alaskan coast. This latest evidence of the current climate breakdown has left experts “out of adjectives”.

In July, temperatures in the Canadian town of Alert hit 21ºC, a new record for anywhere north of 80º. As The Canary reported, areas of forest and peatland were on fire across Siberia, Greenland, and Alaska. Scientists have now discovered that there’s no sea ice within 150 miles of Alaska’s shoreline. This follows a growing trend that shows the Arctic ice is melting at an unprecedented rate. The global heatwave in July has led to warmer seas; and as a result, the ice is literally vanishing. As Prof Peter Wadhams from the University of Cambridge told the Independent:

At this time of year ‘normally’ (ie 30 years ago) there would be sea ice in southern Alaska waters but, more importantly, sea ice across the north coast of Alaska leaving only a narrow slot between ice and land for ships attempting a northwest passage.

a decline of around 85,000 square km per year – equivalent to losing an area of sea ice each year greater than the size of Scotland.

Climate scientist Zack Labe, meanwhile, shared an infographic to show just how fast the ice is melting this year:

The Chukchi Sea is nearly sea ice-free as the unusual conditions continue. @SkepticalRanger has a summary of ice cover around Alaska at https://t.co/rQbh6dZAhU@NSIDC also has a recap of July's record low sea ice at https://t.co/a1zEilRyza pic.twitter.com/mlAbAnfzAc

“What is happening in the Arctic is affecting the entire planet”

I’m losing the ability to communicate the magnitude [of change]. I’m running out of adjectives to describe the scope of change we’re seeing.

This news also has huge implications for Alaskan wildlife and communities. In July, large numbers of dead seals and grey whales were reported off Alaskan coasts. Polar bears are already an endangered species; and already fragile ecosystems may be further threatened, as loss of ice means huge numbers of walruses arrived early in Alaska this year.

The loss of terrain has been particularly pronounced over the last decade. The erosion caused by increasingly fierce storms, together with the rising sea level, means that the displacement of its population is inevitable.

This isn’t new information. In 2013, warnings emerged that people in Kivalina may become “America’s first climate change refugees”. Six years later, this looks set to be the start of a global pattern:

Unfortunately, according to experts, what is happening in Kivalina will cease to be an isolated event, becoming a widespread reality in many other parts of the globe. For Kivalina there is no turning back: relocating the village is the only solution. These Alaskans are amongst the first to suffer the consequences, but what is happening in the Arctic is affecting the entire planet.

As The Canary‘s Glen Black reported:

Arctic environments are “particularly sensitive” to the impact of the climate crisis, the WMO [World Meteorological Organization] said. Smoke can cause snow and ice to absorb rather than reflect sunlight, causing the surface to warm faster. This also risks thawing permafrost, which contains an estimated 1.7tn tonnes of carbon that will be released as either CO² or methane. Methane is much more damaging to the climate than CO² in the short-term because it is better at absorbing heat. And a 2017 report showed the Arctic is now “warming at double the rate of the global temperature increase”.

The lack of sea ice in Alaska is just the latest sign in the highly visible impact of climate breakdown. So far, 2019 has already witnessed record temperatures and extreme weather such as the devastating Cyclone Idai, regarded as one of the deadliest storms on record in the southern hemisphere. Around the world, biodiversity is under alarming threat, and carbon dioxide levels have reached historic highs.

Now, sea ice has disappeared off the Alaskan coast for the first time, the Arctic’s on fire, and sea levels are rising.

Have we actually run out of time? We must act now to insist every person and government, in every country, makes immediate and actual change.