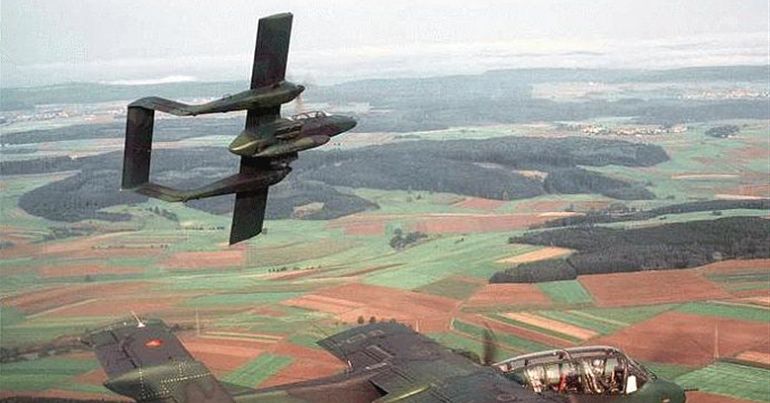 The latest instalment of creative storytelling about Venezuela has come in the form of a Yahoo! Finance news video entitled How Venezuela became ‘the cocaine capital of the world’. The report builds on years of dubious reports alleging major ties between the Venezuelan government and the narcotics trade, and is easily disproved on all counts.

Meanwhile, the US government and corporate media seem curiously unmoved by news that the Honduran president – a key US ally in the region – has been implicated in a $1.5m drug case.

‘The cocaine capital of the world’?

The spurious claim that Venezuela has become “the cocaine capital of the world” was not plucked from thin air.

Take the Cartel de los Soles (Cartel of the Suns) conspiracy, according to which various high-level Venezuelan officials supposedly control a notorious drug cartel. Despite allegedly operating since the early 1990s, the ‘cartel’ was yet to claim any drug-related victims or even be implicated in any drug busts as of 2017.

In February 2017, the Donald Trump administration sanctioned Venezuela’s then vice president Tareck El Aissami over drug trafficking allegations upon scant evidence. A poll taken at the time found that two thirds of Venezuelans rejected the allegations, and 69% thought the US hadn’t provided sufficient evidence.

In 2018, Washington formally accused the elected government of President Nicolás Maduro of “profiting from illegal narcotics shipments” and levelled sanctions against Venezuelan socialist party official Diosdado Cabello. In March 2019, El Aissami was again accused of drug trafficking in the New York Times, as well as having links with Hezbollah. The story recycled the older allegations with the help of a fresh “dossier” that the Times did not release to its readers. And after a failed coup attempt in February 2019, Fox News claimed that “drug trafficking [is] keeping Maduro in power”.

The drug trafficking narrative appears to be laundered through neoconservative thinktanks like the Foundation for the Defense of Democracies (FDD), whose website claims that:

Venezuela is… one of the largest transit points for cocaine and heroin flowing into the United States.

The FDD’s Emanuele Ottolenghi is frequently quoted by Fox echoing the ‘transit point’ argument. Elsewhere, Ottolenghi has encouraged Venezuela’s “regional allies… to actually put action where their words are and show they’re willing to take the risk to restore democracy in Venezuela”.

The FDD happens to be one of the most powerful thinktanks influencing US foreign policy. FDD’s former executive director Mark Dubowitz, for instance, “is credited with helping design the sanctions regime that was put in place in 2010” against Iran. In July, senior FDD counselor John Hannah sat down with US special envoy to Venezuela Elliott Abrams to discuss US strategy and sanctions in the country. “The drugs come in from Colombia to Venezuela,” Abrams told Hannah, “and then they go north from Venezuela”.

Incidentally, the Yahoo! report also features Ottolenghi; indeed, its brazen ‘cocaine capital’ claim would have been all but impossible without the stream of evidence-light allegations that came before it.

Far from the truth

The only way one could claim that Venezuela is the world’s cocaine capital is by arguing that it is the world’s preeminent transit country. This is the argument put forward in Yahoo!‘s report.

Former chief of the US Drug Enforcement Agency (DEA) Mark Vigil tells Yahoo! that Venezuela has “become worse than a narco-state”, estimating that “150-200 metric tons of cocaine are passed from Colombia to Venezuela per year”. Citing an unnamed US official, CNN also estimates that “240 metric tons… of cocaine crossed into Venezuela from Colombia” in 2018. The Washington Post then cited CNN quoting an unnamed US official.

Even if, as CNN claims, the estimate of 240 metric tons is “conservative”, it is still nowhere near the 1,400 metric tons of cocaine that the US state department estimated were smuggled through Guatemala the same year.

What’s more, US sanctions on Venezuela should logically impact coastal trafficking routes, given that Venezuelan exports have been considerably paralysed. Indeed, air trafficking routes would not be affected, but as US Southcom commander Kurt W. Tidd analysed in 2016:

air trafficking continues to be a declining percentage (3%) of overall cocaine flows.

trafficking by air and mail is comparatively limited [to maritime trafficking].

The following trafficking maps produced by the DEA offer a visual representation of coastal cocaine routes. Crucially, they suggest that cocaine transit through Venezuela has consistently decreased since 2013 – when Maduro was first elected: 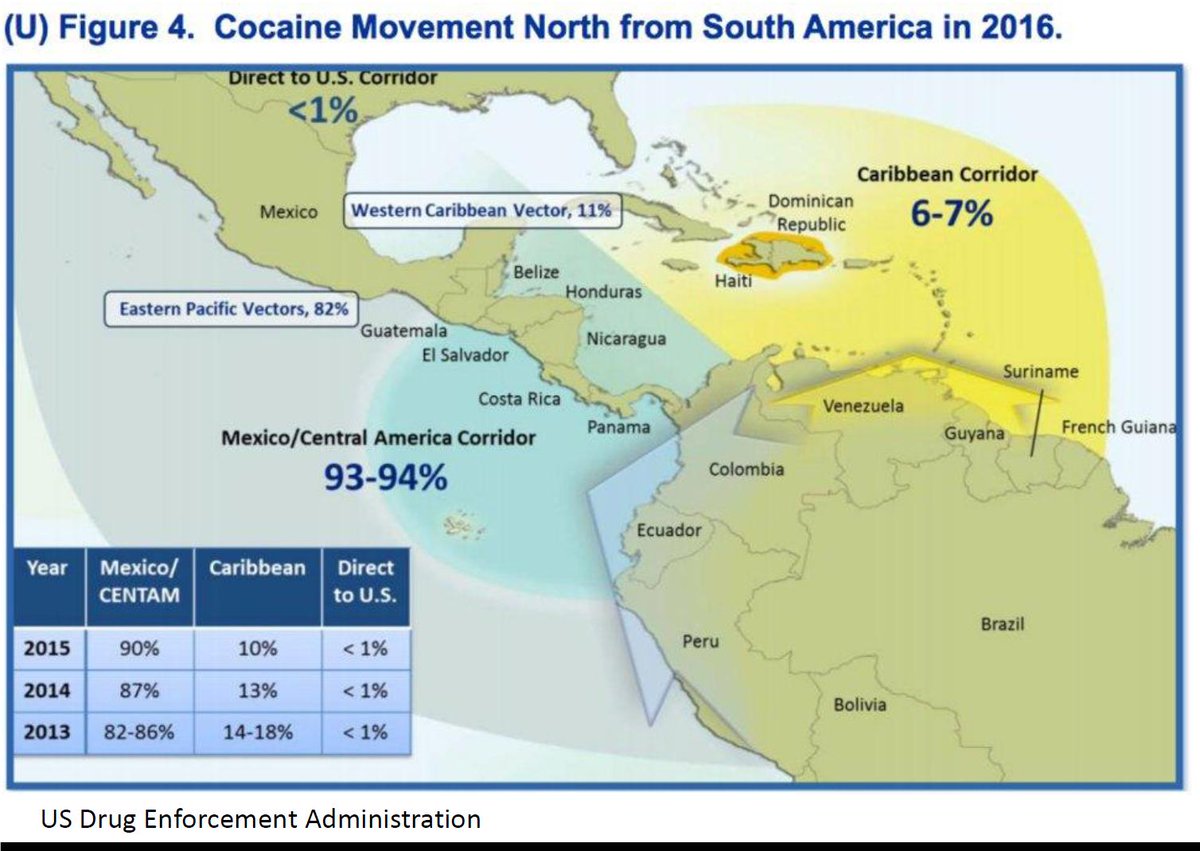 Between 2013 and 2016, cocaine trafficking through the ‘Caribbean corridor’ decreased by roughly half. 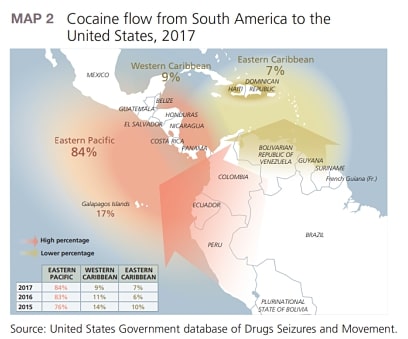 Between 2015 and 2017, cocaine seizures and movement through the Caribbean reduced again.

The hypothesis that the amount of cocaine moving through Venezuela is actually declining relative to other routes is supported by a recent study by the Mexican government, which between January 2018 and February 2019 intercepted 10.7 tons of cocaine – almost two thirds of the total seized over the former six years. The Mexican government observed a marked increase in interceptions on the Pacific coast, suggesting that the lion’s share of cocaine from Colombia is moving west rather than east through Venezuela.

Together, the data shows that Venezuela is far from the world’s cocaine transit capital, and suggests that the amount of cocaine moving through Venezuela since 2013 has consistently declined.

Given Washington’s apparent concern over drug trafficking in Venezuela, meanwhile, it’s well worth looking at the friends it keeps.

The “Narco State” of Honduras

Honduras is an important transit point for cocaine.

Since a US-backed coup in Honduras in 2009, the country has reportedly deteriorated “from Banana Republic to Narco State” – suffering repeated drug scandals involving high-level government officials.

Yet no scandal has been so serious as the revelation on 3 August that Honduran president Juan Orlando Hernández is tied to a major drug case. According to an ongoing court case in New York, Hernández used $1.5m dollars to fund political campaigns – notably the 2013 presidential election. The 49-page federal document alleged that Hernández worked with his brother Tony to “use drug trafficking to help assert power and control” in the country. If he is prosecuted, the US government would be legally implicated in having ushered in and propped up a narco state.

This might make US policy look hypocritical were it not already totally apparent that the ‘war on drugs’ has less to do with drugs than protecting US capital – an endeavour that requires the US and its allies to monopolise (rather than destroy) the drug trade.

In any Latin American country in crisis, a certain degree of drug-related corruption can be expected. And Venezuela is certainly not free of corruption. But widely circulated views that Venezuela is becoming a fully fledged ‘narco-state’ or the world’s ‘cocaine capital’ are simply not supported by the statistics.

Meanwhile, the idea that a network of drug traffickers presents the only hurdle to toppling Maduro ignores, in typical fashion, the considerable organic support for Venezuela’s Bolivarian revolution. Once again, these people have been silenced by the corporate media.