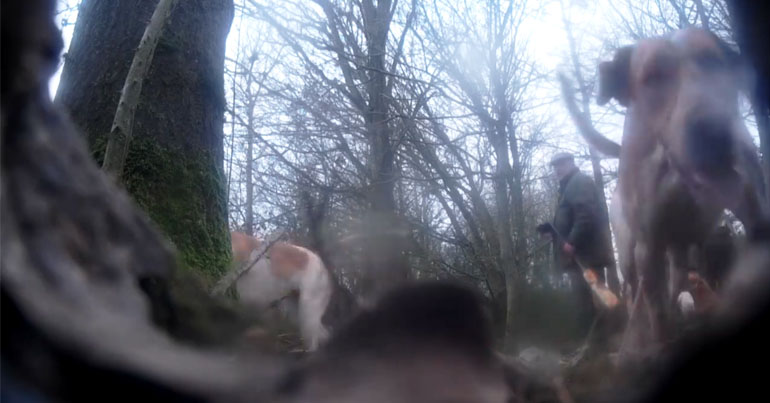 A court sentenced two men for their role in a “shocking incident” during a New Year’s Day hunt. But even the judge pointed out that they weren’t the “brains of the operation”.

District Judge Kamlesh Rana convicted Ian Parkinson and Mark Vincent of animal cruelty charges on 30 October. Undercover footage caught the pair forcing a fox out of an artificial earth and into the path of hounds belonging to the Kimblewick Hunt during the 2019 New Year’s Day meet. Both men “were employed in” The Kimblewick Hunt at the time of the incident, according to the BBC. When convicting, Judge Rana described Parkinson and Vincent’s actions as “deliberate and pre-meditated”.

On 26 November, Judge Rana gave both men a 12-week custodial sentence suspended for a year. She also ordered them to pay £960 in costs, complete 120 hours of unpaid work, and undertake 15 days of rehabilitation. The judge also added that she recognised Parkinson and Vincent “were not the brains of the operation”. The Guardian reported that a Crown prosecution Service official said neither Parkinson nor Vincent admitted to wrongdoing. Charlotte Webster said:

Despite being captured on CCTV dragging the fox violently out of the trap as dogs approached to chase the frightened animal, the pair continued to deny they had done anything wrong.

Man behind the curtain

Lee Moon of the Hunt Saboteurs Association (HSA), who first published the footage filmed by the Covert Film Unit, said:

We’re pleased that justice has been done and the two hunt employees have been punished for their part in this shocking incident. However lets be perfectly clear, what’s shown in this footage is not an unusual act in the world of organised fox hunting but rather a common place, every day action carried out by hunt terrier men week-in week-out across the country.

Moon went on to underline Judge Rana’s observation that Parkinson and Vincent were part of a bigger operation:

The footage clearly shows the whole hunt were complicit in the events that took place in January this year and therefore should all pay the penalty for this inexcusable cruelty.

A spokesperson for pro-hunt lobby group the Countryside Alliance said:

Every hunt should be open and accountable while operating to the highest standards at all times. There is no justification for this type of activity.

The HSA also published the evidence used to convict Parkinson and Vincent, including previously unseen footage. New videos show Vincent talking on his phone as well as the Kimblewick Hunt’s hounds entering the wood where Parkinson and Vincent had recently released a fox.

“I will continue hunting after it is banned”

In 2004, the Telegraph ran a series of quotes from the hunting community about their thoughts on the then-impending ban. It included Polly Portwin, then a joint master of the Bicester Hunt with Whaddon Chase. Portwin said:

As The Canary previously reported, Portwin’s husband Guy is very closely linked to the Kimblewick Hunt. And while there’s nothing to tie Portwin to the case that went through court, it’s clear that the Kimblewick Hunt has stayed disturbingly true to her word.